Kurtley Beale is returning to Australia to shoot for a 2023 Rugby World Cup spot with no guarantee that a regular Wallabies spot is waiting for him.

That’s the admirable take on reports out of France that the 95-Test figure will return to Australia after his contract finishes in June with Racing 92 in Paris. Motivation high. That’s a good thing.

There’ll be spot fires of debate today about whether Beale is already past his use-by date at 33 and whether the Wallabies should be zeroing in on different fullback options.

The fact is that fullback is one of the most important positions in the team and the most contentious with such a lack of contenders.

The field thins out completely once you throw up Tom Banks, the Jordan Petaia experiment that is still to get out of the test tube and utility Reece Hodge. Queenslanders will suggest Jock Campbell on Super Rugby form but he’s a step below Test level.

The Beale case is intriguing. Wallabies coach Dave Rennie recalled him for three Tests in Europe late last year when Banks and Hodge were out injured.

The Rennie rating at the end of it was “really rapt” even allowing for a hum-drum game against England before a strong game against the Welsh. 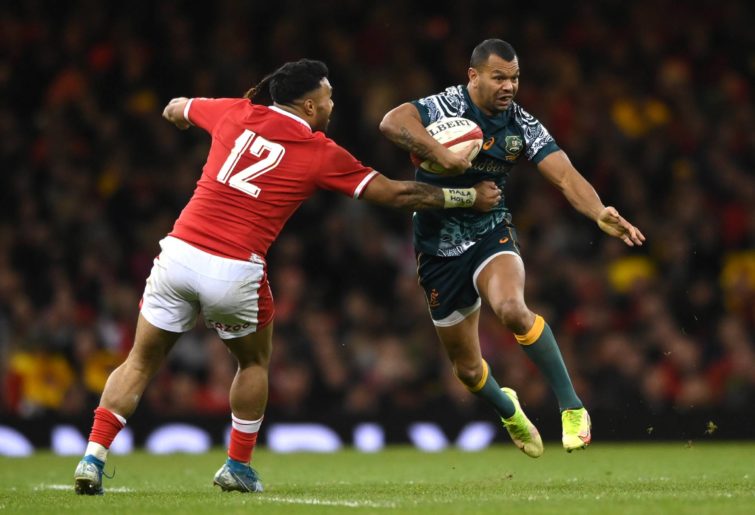 What the Wallabies really need is a Freddie Steward clone. Remember him? He was the dynamic, swerving figure at fullback last November when England beat the Wallabies at Twickenham. He’s 21, 100kg-plus and full of gallop. He has the sort of thrust from fullback that Petaia could offer if he learnt to kick. He certainly has the high-ball skills and thrust.

Banks started the first eight Tests of 2021 before a broken bone in his arm grounded him. He played some of his best Test rugby, not all the time but enough to feel he’s going to give 2022 a good crack.

Beale showed us a glimpse last November. His step, dangle of the ball and fend to shoot through a gap against the Welsh put Filipo Daugunu over for a try.

You have to admire Beale for wanting to chase a start at his fourth World Cup but it won’t be easy.

He’s not across the line like a Quade Cooper or Rory Arnold, who just have to put up their hands from abroad and they’ll be starters.

Beale really has to perform.

At his best, his ad libs, his jinky speed, his ball-play and his interplay with Bernard Foley made him look a step ahead of the defence time and again at the 2015 World Cup in England. That’s more than six years ago.

Does Beale still have his line-breaking speed? Is he going to make those forceful tackles as the last line of defence? They are good questions.

What he does have is experience and that counts for loads at a World Cup. He’ll dab a pressure-relieving kick when you need it although the one he didn’t get away against Wales in the closing moment was crucial to the result in Cardiff last year.

Most of all, it seems that Beale has the motivation which is a good thing.

It’s just a shame he isn’t on a plane this week. The NSW Waratahs would relish having his experience and polish in the backline as they try to shake off the disasters of 2021.

The Beale case will be an interesting one in 2022. He really has to strike top form for rugby fans to get on board for the ride.