The naïvety of Nestor: 15-year-old bursts on to the scene

When I was a teenager, one of my favourite things in training was to practice free kicks.

We all dreamt of scoring one in a match situation, but as a teenager you rarely get the chance to. So, what would happen if a 15-year-old stepped up to take a free kick in a professional match?

Nestor Irankunda is currently experiencing a lot of attention across the globe for his tender age, quality of free-kick and amazing celebration.

When Adelaide earnt a free-kick in the 88th minute in a match they had been dominated by Newcastle, there seemed to be little threat with United missing the regular set-piece takers.

While neutral fans and the opposition seemed surprised to see the 15-year-old step forward, unopposed with the ball, anyone remotely close to the player knew what could happen.

Irankunda has always taken free kicks for his teams – after every United practice he will spend time honing his craft against the club’s young goalkeepers with expert takers in Craig Goodwin and Isaias.

To be able to get the ball up and over the wall from just outside the box is a skill itself – made even harder for the diminutive teenager, as the players in the wall while jumping were double his height.

After the ball rippled the net past a helpless Jack Duncan, Irankunda backflipped away in delight and was mobbed by his teammate s.

Irankunda has proved to be one of the most popular players in the team this season and is treated like everyone’s little brother. He is old enough to be a son to the senior players at a club.

Like many players with African heritage, he has had quite an interesting football journey. 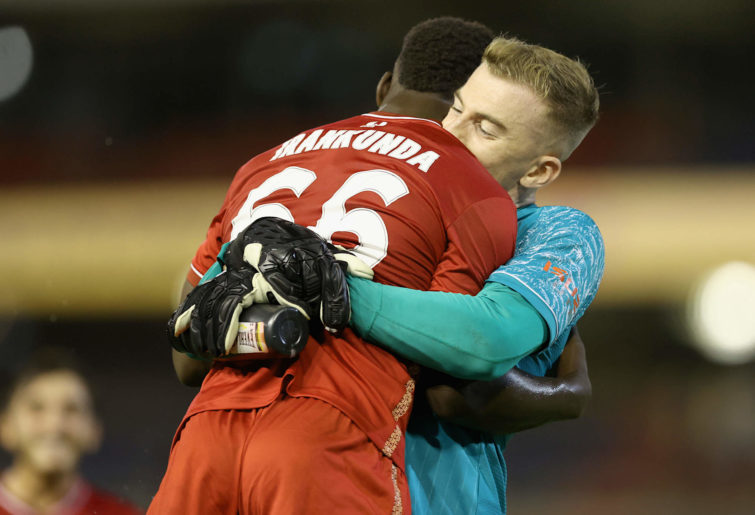 Nestor was born in the lake port city of Kigoma in the country of Tanzania. The Irankunda family then left for a better life in Australia

His talent was spotted early and with the family living in Adelaide’s northern suburbs, there were several sides keen on having the talented tyro play for them, with Adelaide Raiders winning the battle.

Raiders were a club formed by the local Croatian community 70 years ago and have been one of South Australia’s most successful clubs.

They have produced countless players for the NSL and A-League over the years – Richie Alagich, Craig Goodwin, Osama Malik, Jordan O’Doherty and Daniel Margush, to name just a few.

Irankunda’s time in the under-12s had scouts salivating – 28 goals in a season of utter dominance, his terrifying pace and trickery was on full display at even that age.

Adelaide United was quick to pounce after a personal recommendation and Nestor was soon playing in the United youth team for the 2021 SA NPL season.

Playing against men and no longer boys, Irankunda scored three goals last season as an impact sub – his talent and dedication while training with the senior A-League side earnt him a squad position.

He has come off the bench two other times this season.

His first match was in a baptism of fire in Melbourne against arch rivals Victory, where he seemed to wilt under the occasion of the big lights.

The second match he took part in was against Melbourne City, where he had no issue running at two players constantly – but was well marshalled by Scott Jamieson.

Adelaide is playing it safe and trying to not overload the teenager with too much game time.

Irankunda is still only 15 and he will grow in height and muscle on his body, he does not have the stamina to last a full game – let alone half of one at the moment.

Irankunda is at the right club to nurture his explosive talent, a club that values and plays youth – had he been part of one of the bigger A-League side’s set-ups, it’s likely no one would ever have heard of him.