Phoebe Bell: 'It would be unhealthy if beach volleyball was my only focus'

This weekend, the Australian Beach Volleyball Tour will commence with the Cobram Barooga Classic running from February 4-6.

This tour is important for the competing athletes as it signals the build-up to the Birmingham 2022 Commonwealth Games, which is now less than 200 days away.

Phoebe Bell, who placed third at this event last year, will be competing, but this year with her new partner Stefanie Fejes.

Bell and Sejes are coming into this event as top seeds in front of Jasmine Fleming and Georgia Johnson and Jess Ngauamo and Nikki Laird.

With Tokyo Olympics sliver medallists Mariafe Artacho del Solar and Taliqua Clancy not competing, this is a great opportunity for one of these duos to dominate.

Bell has been playing volleyball since she was in high school. Her high school had a volleyball academy and with both her brothers involved in the sport, it seemed natural that Bell would follow.

Her eldest brother competed for the Australian indoor national team and also played professionally overseas for seven years, while her other brother spent a year in Canada playing volleyball.

“My parents are my biggest support,” said Bell.

“I remember my parents used to drive me to training on the other side of Brisbane which was 50 minutes away every single day.

“Then they would come and pick me up at 9-10PM when we used to finish with my dinner in the car.”

Bell has been competing for many years and has had the chance to play alongside very different people.

So what is it that excites her the most about playing alongside new partner Fejes?

“She is an exciting young player and she is also left-handed, which is extremely unique for beach volleyball,” said Bell.

“I think our game style will be different to all the other teams and I think it is going to be exciting to watch.

“But the biggest thing for beach volleyball and for team sports is that you have to be on the same page as your teammate, so even though physical attributes come into it, having similar values are important.

“If your mindset is similar and you are willing to put the work in, that’s where success comes from because it allows your team to develop trust.”

For Bell, there are a couple of things that she considers to be her values on the court.

“I like to play with a lot of freedom and run an offence that isn’t one dimensional,” said Bell.

“I like playing with joy and having gun on the court and I truly think that that’s where best performance can be unlocked.

“I also love competition, it’s one of my favourite parts of being an elite athlete.

“So for me its freedom, enjoyment and competing really hard.”

While Bell is committed to beach volleyball full time, she is also doing a bachelor of marketing part time.

Bell loves competing and playing beach volleyball, but her study is something that is also extremely important to her.

While for many athletes across the country, their sport does not pay them enough to focus on high performance exclusively, for Bell that can be a positive thing.

“I am full time with my volleyball, but having a degree is great for my skill set as a person first and an athlete second,” said Bell.

“I need to work, I need to do other things; our sport is not heavily funded and financially we have to do a lot on our own.

“It can be hard, but it can also be very beneficial and healthy, depending on how you look at it.”

Maintaining that balance is fundamental for Bell.

“It’s extremely important to have balance in your life; high performance doesn’t have to be one dimensional and for me, everything does not have to be able volleyball,” said Bell.

“I think it would actually be really unhealthy if that was my only focus.

“It’s important to have other areas in your life to go to as a release and in my view your best performance comes when your life is balanced.” 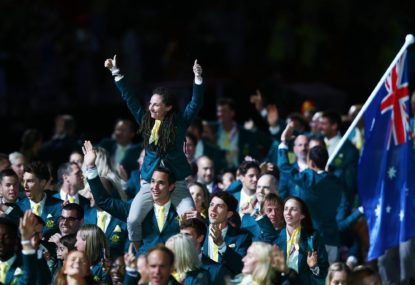 This week it has been reported that the Commonwealth Games could be returning to Melbourne in 2026, two decades after the city last hosted…

There have been questions raised recently about the relevance of the Commonwealth Games. From witnessing the 2018 games on the Gold Coast in April,…

The Queen's Birthday Honours recognise the achievements of Australians on and off the sporting field. Rarely do sports people receive the Companion of the…

Callum Hawkins' treatment was a disgrace

The sight of Callum Hawkins – who was leading the Commonwealth Games Marathon – lying crumpled on the ground, barely conscious after hitting his…

Callum Hawkins' treatment was a disgrace