After over two weeks of jam-packed action, the (Winter) Olympic flag has been handed over to Milano-Cortina, the Games of the XXIV Winter Olympiad declared closed, and the Olympic flame extinguished.

Beijing entered the history books as the first city to host both a Summer and Winter Olympics, having hosted the Summer Games in 2008 to much fanfare and success.

Several venues which were used fourteen years ago, such as the Water Cube where Stephanie Rice won several gold medals and the Bird’s Nest, where Steve Hooker and Matthew Mitcham among others struck gold, were repurposed for the Winter Games.

The former venue was transformed from a swimming pool into a curling venue, where Tahli Gill and Dean Hewitt made history as the first Australian team to compete in the sport of curling, dubbed “lawn bowls on ice”.

It was a tough initiation to the sport for the pair, who lost their first seven matches before salvaging their campaign with two victories over Switzerland and Canada, but not before a major COVID scare which very nearly saw them pack their bags and return to Australia.

The two victories came after they were given a last-minute reprieve, and the pair made the most of their second chance.

As was the case in Tokyo six months ago, once athletes completed their events, they would be required to leave Beijing within 48 hours; as such, our medallists Jakara Anthony, Jaclyn Narracott, Scotty James and Tess Coady were back in the country halfway through the Games.

By winning the women’s moguls in the freestyle skiing, Anthony ended the country’s twelve-year drought on top of the Winter Olympic podium, becoming our first gold medallist at a Winter Olympics since Lydia Lassila and Torah Bright both struck gold at Vancouver in 2010. 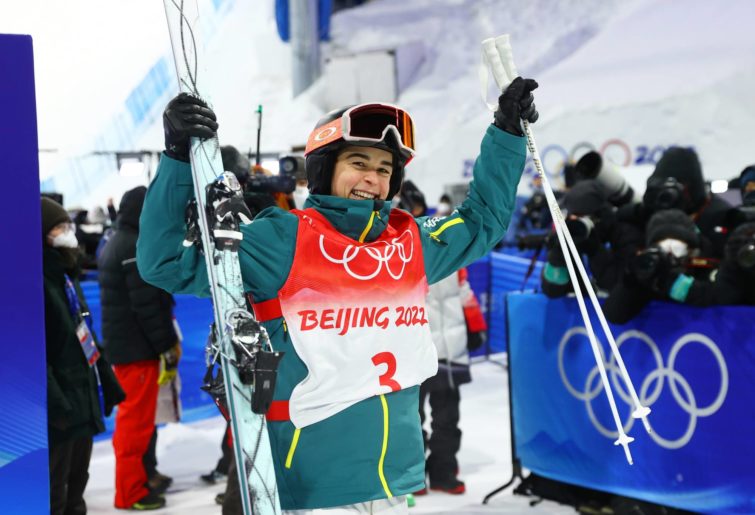 Narracott made history by becoming the first Australian of any gender to win a medal in the skeleton event; during the heats; she posted a track record time and in the finals assured herself of at worst a silver medal, only being pipped by German Hannah Neise.

James improved on his bronze medal performance in Pyeongchang with a superb performance in the men’s halfpipe snowboarding, only screwing up on his third and final jump thus costing him a gold medal, which would’ve been the first by an Australian man at a Winter Olympics since 2006.

And finally, Coady took bronze in the women’s slopestyle snowboarding event, which was won by New Zealander Zoi Sadowski-Synnott, who became her country’s first ever Winter Olympics Gold Medallist, two decades after Steven Bradbury did likewise for Australia.

Our Tasman neighbours picked up another gold medal at the death, with Nico Porteous winning the men’s freestyle skiing halfpipe on the penultimate day of competition, while Sadowski-Synnott added a silver medal to her collection, meaning the Kiwis finished with three medals.

All up, while four medals does not sound like enough, it is the most medals Australia has ever won at a single Winter Olympics, a great achievement considering winter sports has never been our strong point.

Our 18th-place finish is an improvement of five places from Pyeongchang in 2018, where two silvers and a bronze were won.

There were others who entered the Games with high expectations but failed to make it onto the podium – namely Belle Brockoff, Laura Peel and Danielle Scott, while Brendan Corey was disqualified from the very event that Bradbury had famously conquered at Salt Lake City in 2002 – the men’s 1,000m short track speed skating.

Our efforts in Beijing came off the back of our 46-medal haul at last year’s rescheduled Tokyo Olympics, in which we won 17 gold medals – equalling the record we set at Athens in 2004.

And with the Commonwealth Games in Birmingham just five months away, another massive medal haul is expected there.

While the Olympic flame has been extinguished in Beijing for a second time, there are still the Winter Paralympics to look forward to, which begins next Friday (March 4), but in news that will disappoint fans, most (if not all) events will be exclusive to streaming on 7Plus.

It remains unknown whether there will be a highlights package on any of Seven’s channels; if not, it would be a massive step backwards from coverage of past Winter Paralympics, when the ABC (in 2010 and 2014) and Seven (2018) showed short highlights on their channels.

Another topic of discussion is Seven’s coverage of the Winter Olympics, with replays of events in which Australian athletes participated often consuming the prime-time schedule, as well as not enough live events being shown such as the curling and ice hockey.

It is well known that not many Australian athletes participated in Beijing but that should not be an excuse for those without 7Plus not to be able to see other sports live on the main Seven channel.

On that note, how Seven will cover the Commonwealth Games in Birmingham, which is nine hours behind the Australian Eastern Seaboard during non-daylight saving, this coming July will be another topic for discussion when the time comes.

With a typical day’s schedule expected to begin at 9:00am local time, coverage would start on 7mate at 6:00pm and run through the early evening, before switching to Seven at either 7:30pm AEST or late at night, before another switch to 7mate at 5:00am (during which it would be prime-time in Birmingham).

It will be just the third time Seven has covered a Commonwealth Games, after Manchester in 2002 and the Gold Coast in 2018.

Back on topic to finish off, and after a successful Winter Olympics campaign by our standards, the focus will turn to Milano-Cortina in four years’ time, with the Winter Olympics returning to Italy for the first time since 2006.

In the meantime, there is just under two-and-a-half months to go until the 2024 Paris Olympics, which will be the first Summer Games to be held in Europe since London in 2012.