The end of all things: Looking at Test cricket’s finishes

Some cricket statistics provide a refreshing new view of the game and its players. Others have their limitations but are a reliable overall guide to performance. Others are remarkable one-offs that may never be repeated, leaving the reader in awe.

This next series of articles is about none of those. This is more the type of statistics that might make you briefly say “huh” and then go back to eating your breakfast.

Let’s travel back in time to August 1992, when a blond haired Australian leg-spinner, with a bowling average at the start of this particular innings of 335, motored Australia to one of their more remarkable victories.

Taking on Sri Lanka in Colombo, Australia gave up an insurmountable 291 first innings lead. Shane Warne, fresh from being eviscerated by India’s Ravi Shastri on his Test debut, finished with the first innings with the unflattering figures of 22 overs, no wickets, 107 runs. Match over.

But a classic Captain Grumpy spray from Alan Border and an even second innings batting performance gave Sri Lanka a tricky 181 run chase for their maiden victory over Australia. From cruising at 2 for 127, things went very pear-shaped.

It’s not well remembered that the collapse was started by Craig McDermott ripping the heart out of the Sri Lankan batting by dismissing star batter Aravinda de Silva and captain Arjuna Ranatunga, both driving to mid-off.

Border’s full stretch catch after running back 25 metres with the flight of the ball to dismiss de Silva was possibly the turning point of the match.

It’s also barely remembered that Greg Matthews then chipped in with 3 quick wickets to take Sri Lanka to 7 for 147, still 34 runs short of victory.

However, first drop Asanka Gurusinha was still at the crease looking comfortable after scoring 137 in the first innings.

For some reason Allan Border threw the ball to Warne as his 6th and final bowling option. Gurusinha watched on helplessly as within 31 balls, Warne had taken three tail end wickets for 11 runs and a star was born.

This got me thinking:

How many others have taken the final three wickets to close out a match? Who has done this multiple times? How many have at least got to take that final wicket?

Who makes a habit of hitting the winning runs? Who does it with a flourish and biff over mid-wicket and who nurdles one to fine leg?

A while back I did a deep dive into Australian cricket’s greatest winners, both numbers of wins and more importantly, performances in wins compared to their peers. In this analysis all I’m looking for is who was most often there at the end to hit the winning runs (or be at the non-striker’s end for the obligatory fist pump and exuberant hug), or to take the final wicket (traditionally followed by running around like a demented goat, often brandishing a wooden stump in a semi-threatening manner).

Allan Border is one of Australia’s greatest ever captains. (Credit: Ben Radford/Allsport via Getty Images)

To do this I have reviewed every scorecard from every test match that produced a result and determined who was at the crease when the winning runs were scored or who took the final wicket.

In future articles of this little series I will present these individual nuggets, but this time around let’s look at the way Test matches finish from a global and team point of view.

Modes of dismissal – how Tests are won
So when a team wraps things up by taking that vital last wicket, how do they do it?

Caught in some way accounts for 52.8 percent of all final dismissals. Of those catches just over 40 percent are behind the wicket (i.e. either keeper or slips) with the remainder in the field. Next comes knocking over the stumps.

287 Tests have been ended in this most satisfying way – 27 percent of all victories by runs.

A further 13 percent occur via LBW.

It might surprise you to know that there have been 33 tests to have ended with a run out, only slightly less than stumpings (41) and caught and bowled (46). Pakistan’s Mohamad Abbas is the only player to have been run out twice to finish Tests.

18 Tests have been finished with a catch by a substitute fielder (but don’t tell Ricky Ponting). Two have been substitute wicket keepers.

Interestingly, only three bowlers have finished a game via a caught and bowled more than once in their careers: Ravi Ashwin, Stuart MacGill and Kerry O’Keefe. It may also interest you that while Shane Warne finished off a Test match more than any other player (22 times), he never once did it via a stumping.

Then we have this: in Christchurch in 1956, Kiwi batter Tony MacGibbon ended a test match by hitting his own wicket, the only player so far to do so.

The Doomed Defenders – Batting to a loss

For there to be the Harlem Globetrotters, someone had to be the Washington Generals. For every Mozart a Salieri. Likewise for every celebration as a bowler finishes a game off, there is a dejected batter looking for a hole to crawl into.

On average the last three wickets in a failed chase score 39.3 runs. At one end, there is Australia vs India in Perth in 2012, when the final three Indian wickets added exactly zero, taken down by the all-time great pairing of Peter Siddle and Ben Hilfenhaus (later matched by Sri Lanka in Karachi in 2019).


At the other end of the spectrum we have a doomed Zimbabwe lower order putting together a scarcely believable 198 runs for their last three wickets in Perth against Australia. Unfortunately for them Matt Hayden had virtually doubled those runs on his own in his world record first innings effort and Zimbabweans perished by an innings and plenty.

On 36 occasions, the last three have succumbed for 5 runs or less. On 11 of those occasions it was one single bowler who cleaned them up. No bowler has ever managed to have such a spell twice in their career.

It is slightly weird that in amongst greats like Fred Trueman and Richard Hadlee to have taken the last three wickets for less than five runs added to the score, we also find the name of Michael Bevan, against South Africa in Johannesburg in 1997. Bevan actually took the last 4 wickets for only 2 runs.

I should mention that fearsome West Indian pace bowler Curtly Ambrose who could be completely unplayable when on a roll. While he never took the final three wickets of an innings where a team added five or less, he did do it while giving up just 6 runs, twice.

The final three have put on over 100 on 55 occasions to still end up on the losing side. Only twice have these fabulous efforts got a team to within a heartbreaking 5 runs of a famous victory, only for it to be snatched away at the death.

Australian fans will unfortunately remember both of these two tests all too well. Adelaide 1993, Courtney Walsh bouncing out poor Craig McDermott as the West Indies hang on by 1 single run to retain their world champion status.

And then Michael Kasprowicz in 2005 suffering the same fate to Steve Harmison to go down by 2 in the greatest Ashes series in 70 years.

The final shot – how chases are wrapped up
There have been 32 Tests won by way of extras – wides, no balls, byes or leg byes – a wholly dissatisfying way to finish. Possibly the most interesting of these was at Nottingham in 1986. New Zealand were heading toward a comfortable victory over England, which led to elegant English batter David Gower having a bowl at the death to Martin Crowe. His one ball was called a no ball for throwing – and Crowe smashed it to the fence to boot.

145 tests have been won by nudging a single, 61 by piercing the field for a couple, only 15 times have tests been won by running 3.

Fully 316 players have had the satisfaction of striking a 4 to finish a match, the most common way to ice a chase. I suspect there is often not much enthusiasm from the fielders to chase these down.

In Brisbane in 1998, West Indian Desmond Haynes uniquely won a test match by scoring a five, a sprint for a single, a wild throw and 4 overthrows.

And finally there have been 43 brave souls who have risked everything for glory by smashing the last ball over the fence. England’s Eddie Paynter was the first, smacking Stan McCabe out of the park in Brisbane during the famous Bodyline series in 1933.

England legend Wally Hammond was the first to do it twice and he was followed by aggressive Kiwi all-rounder Richard Hadlee and Tasmanian great Ricky Ponting. 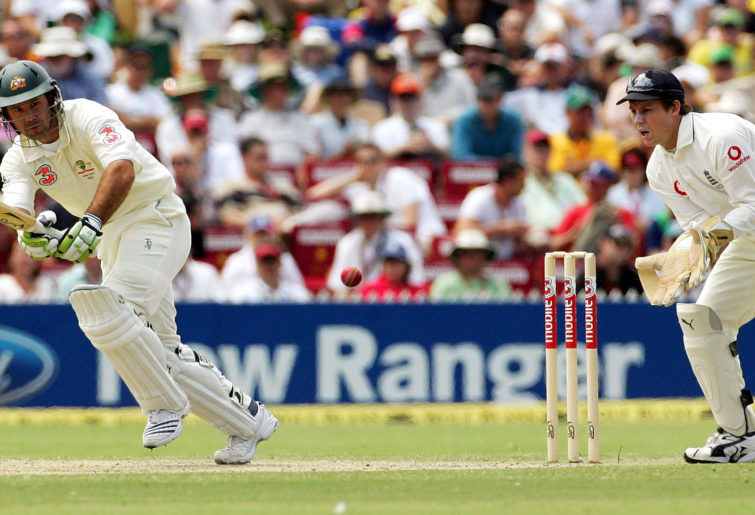 But they pale in comparison to normally conservative Pakistani captain Misbah-ul-Haq. Misbah had a thing for ending tests with a flourish and hit the final ball for 6 on no less than 4 occasions.

This included one particularly spectacular finish against the West Indies in Kingston in 2017 when Misbah put the final two balls over the fence.

The only other time a test has been ended with consecutive sixes was by coincidence less than four earlier, when converted Kiwi Colin de Grandhomme did it to Bangladesh in Christchurch.

West Indians Carl Hooper and Gus Logie both ended tests with a 6 that was their only scoring shot in their innings, but they were outdone by hyper aggressive Sri Lankan opener Sanath Jayasuriya, who put hapless English spinner Phil Tufnell into the grandstand with the only ball he faced for the innings.

Other than Ponting, Ian Healy, Glenn Maxwell and Joe Burns are the only other Australians to finish a test with a 6.
There have been some memorable finishing sequences over the years.

In 1986 at Lord’s legendary Indian all-rounder Kapil Dev finished a match off with 4 boundaries and a 6 from his last 7 deliveries. This was matched in 2004 by Pakistan’s Shoaib Malik who took 22 from a Rangana Herath over to win by six wickets in Karachi. But even better may have New Zealand’s Stephen Fleming taking 23 form the final 7 balls to defeat South Africa in Auckland in 2004.

And what of the poor bowler, knowing his efforts are in vain, trundling in waiting for the hammer to fall? Only one bowler has suffered the indignity of being smacked for a 6 from the last ball of a match twice: Muthiah Muralidaran.

Next time I will look to individual teams and players and their efforts to make the final plays in Tests.