In an entertaining mishmash of running rugby, end-to-end passages, errors, turnovers, penalties and quite sublime skill at speed, Queensland Reds have outlasted and outplayed Melbourne Rebels 36-32 at AAMI Park.

It was a game, had it gone another 80 minutes, that might have finished 102-96, such was the attacking urgency on display.

Reds openside flanker Fraser McReight – described by Stan Sport caller Morgan Turinui as “Michael Hooper’s ‘heir apparent” – was his side’s best, seemingly everywhere for his team, bobbing up in defence and attack, running down field and creating things and playing like the ghost of George Smith.

He had a few mates, notably No. 8 Harry Wilson and No.12 Hunter Paisami, who ran with vigour and purpose.

“It was helter-skelter,” five-eighth James O’Connor said after the match.

“The Rebels really threw it around and it was a huge effort by our guys.”

“It was a gutsy effort,” Reds captain Tate McDermott agreed.

“But from my point of view not good enough. It’s the basic fundamentals of the game. Holding the ball. When we did we looked really good.

“But we lost a man to card. We need to clean it up or it’s going to hurt us in the weeks ahead.”

Rebels captain Michael Wells said: “For the most part we really stuck to it. You don’t like losing but you take a lot of learnings from a loss. There’s definitely positives to take away from it.

“The more structured the game was the better we were. We’re building.”

Three seconds into the match, flying flanker Connor Vest leapt into the maelstrom and won possession from the kick-off. Thirty-one seconds later the Reds had a penalty for Rebels not rolling away, and James O’Connor nailed the goal from in front.

For ten minutes Melbourne did what they did all game – force Queensland to defend. Matt Toomua bunted with purpose and pinned the Reds in their D-zone.

A penalty goal attempt well within the range of the prodigious boot of Reece Hodge was hooked wide.

A strong cleanout by loosehead Matt Gibbon saw James Tuttle box kick for Jordan Petaia, an early tactic. But the fullback was up to it and ran 40 metres, hop-stepping his way up the middle, beating several.

Queensland scored the first of the game’s nine tries and it was a cracker. With the advantage, O’Connor went to the line, grubbered for Paisami who flew onto the ball, got the bounce, regathered and shifted in one movement and hit Vest with a peach.

Next play Petaia hurled a long bomb to former Melbourne Storm flier Suliasi Vunivalu, returning after a more than 300-day absence for the Reds, who popped a deft first touch to Paisami on the loop.

The centre, a classic, direct, bullocking type with deft hands, dashed down the right, the movement breaking down near the line when his pass back to the winger hit the deck.

“Such great signs already with the return of Suliasi Vunivalu,” Turinui enthused.

Then Vunivalu sent a pass to McReight that the breakaway couldn’t handle because it would’ve better suited a teammate twenty metres away.

“He hasn’t played for nearly a year. That pass needed to be a bit softer,” Tim Horan offered.

Paisami went off with a mystery ankle injury, replaced by Lawson Creighton.

A 26th minute penalty goal by Toomua made it 10-3 before the try of the match: the Rebels roared down the left, multiple men, running angles, fine hands, all at speed – Matt Philip, Kellaway, Tuttle.

A last-ditch tackle and the ball was pilfered by McReight who bolted the other way, fed Wilson on the wing who passed back inside for McDermott who ran 50 metres to score, pursued by a bevy of panting Rebels tight forwards.

And then television tried to kill Bambi.

Back we want to the breakdown and the tackle on Tuttle and – thank you, rugby gods – it was adjudged that the halfback had fallen into Creighton’s forearm.

After Filipo Daugunu was sin-binned for a high shot on Hodge, the fullback stormed right, brought down by a scything grass-cutter by Paisami. A ruck later openside flanker Richard Hardwick bashed his way over for a deserved five-pointer. 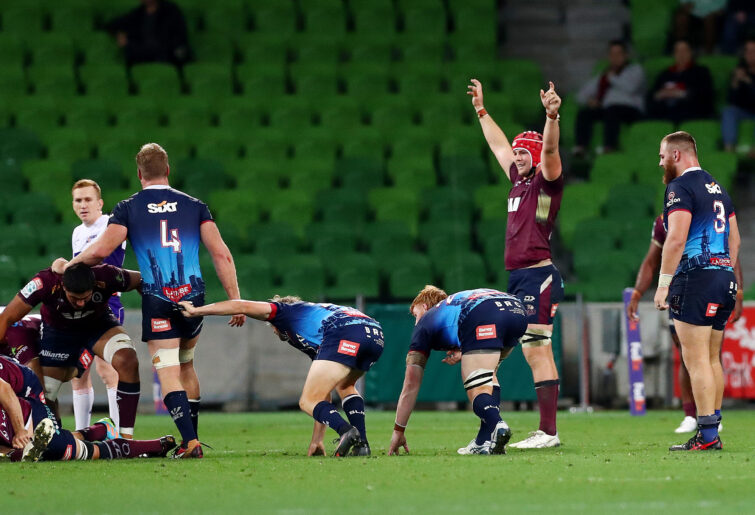 “This could be a match-defining period,” Turinui offered. He was right – though perhaps not as he thought.

The Rebels attacked right, the ball went through the hands, before Creighton plucked a cut out pass from the mild Melbourne air and raced 80 metres to score.

Melbourne hit back – a driving maul and hooker James Hanson scored from ‘No.8’. Toomua pushed the conversion attempt and Queensland led 24-15 at the break.

The answer was the 51st minute, when we also saw Josh Flook replace Vunivalu.

Hodge thumped a penalty goal for 24-18 Reds before ‘Big MP’ – Philip – crashed over under the posts, carrying a number of Reds. After Toomua’s conversion the Rebels hit the lead for the first time with 15 minutes to play.

Then: another try of the match contender. McDermott defused a Rebels bomb before flicking a wobbly pass to McReight who bolted downfield and found the flying Flook, who burned them all to score in the corner.

His counterpart, Cabous Eloff, beard like an Afrikaans voortrekker’s, crashed over with four minutes to play.

But it was too little too late and the Reds rucked it out before O’Connor kicked it out.

“Tremendous effort from the Rebels,” McReight said. “There was an onslaught at the breakdown. They were excellent around the park and put us to the sword when we didn’t’ execute.

“Very proud of our guys. But we have plenty to work on.

“We need to capitalise in their 22. And improve our ‘exits’ from ours.”