Devin Booker’s exit from Game 2 of Phoenix’s series against the New Orleans Pelicans has left the red-hot Suns with a huge offensive void in the playoffs.

Booker had 31 points at the main break in Game 2 in Phoenix and was single-handedly keeping the plucky Pelicans at bay. Booker tweaked his hamstring midway through the third as he went to thwart a Jaxson Hayes dunk. He exited the game immediately and did not return.

The Pelicans seized the advantage and went on to stun the Suns 125-111 in Phoenix to level the series one game apiece.

This isn’t the first time Booker has missed time this season with a hamstring injury. He missed seven games when he injured his other hamstring late last year.

Overall the Suns have won eight and lost six without him this season. Others have stood up when it counted, most notably Chris Paul and Deandre Ayton. Ayton was huge in Game 3 for the Suns, scoring a playoff-high 28 points and claiming 17 rebounds in the process. Paul also collected 28 points and 14 assists for himself.

The Pelicans have been no pushovers so far, led by the experienced CJ McCollum and Brandon Ingram, who continues to draw comparisons to Kevin Durant with his elite mid-range ability. Together the two have pushed the Suns at full strength in Game 1 – Chris Paul had to pull out all the stops to secure the win, scoring 19 points in the fourth quarter.

Booker’s hamstring has been assessed as requiring two to three weeks to heal. They would be without him for the remainder of the Pelicans series and the conference semi-finals as a minimum. If they do make it past the Pelicans – and that isn’t a given – they would face either the Jazz or Mavericks, who are locked at two apiece in their series. 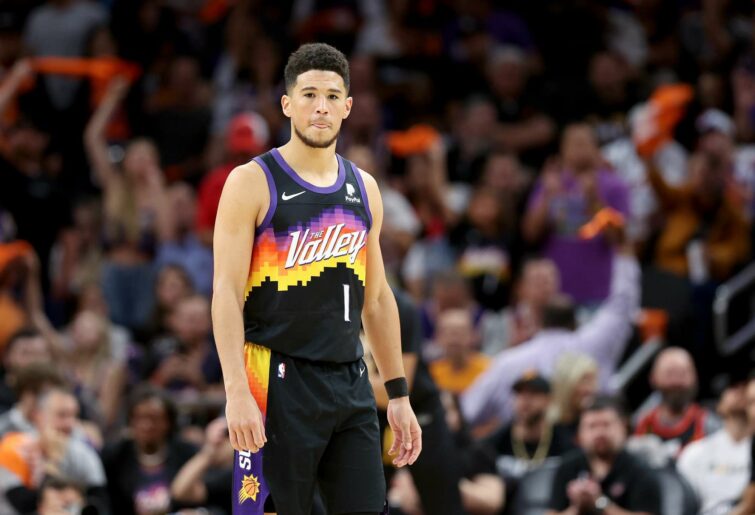 Let’s jump the gun for fun. If the planets align – and they often don’t in the NBA – the Suns could meet the Warriors in a tantalising western conference finals series. The two have met on four occasions this season, squaring the ledger at two wins each. In no one game were both teams at full strength.

In the first outing the Suns prevailed at home as Mikal Bridges locked up Steph Curry, who managed a rare low of 12 points. The Warriors were without Klay Thompson, who had been recovering from a long-term Achilles injury.

In the second outing the Warriors at home took care of the Suns, who were without Booker and still missing Thompson, squaring the ledger.

The third time they met, the Warriors outplayed a full-strength Suns on their home court still without Thompson.

The last time the two teams met this season a full-strength Suns line-up managed to get it done against a Warriors side missing Curry at home but with the inclusion of Klay Thompson building game time. Adding insult to injury, the Suns secured a franchise-best season record.

In summary, the Warriors never got a shot at the Suns with a clean bill of health. But the Warriors entered the playoffs with the old band back together: Curry, Thompson and Draymond Green.

The Warriors have been ruthless in their opening-round series against the Denver Nuggets, shooting out to a 3-0 lead and looking every chance to sweep them. It seems almost unfair to the tireless big man, Nikola Jokic, who seems to be playing a lone hand against the rampant Warriors.

There is much water to pass under the bridge before such a mouthwatering series could materialise, Booker’s hamstring is a big question mark. And can the Suns shake off a hitherto impressive Pelicans outfit who started the season 1-12? Pelicans coach Willie Green has intimate knowledge of the Suns, having served as assistant coach between 2019 and 2021.