Carlton’s Marc Pittonet has become the latest AFL ruckman to be struck down by a knee injury and will miss up to three months.

Pittonet went down in the first quarter of Saturday night’s loss against Fremantle and was subbed out of the game.

The 25-year-old underwent a scan in Melbourne on Tuesday, confirming he will be sidelined for between two and three months.

“The injury is obviously a significant one and will sideline Marc for an extended period of time, which is unfortunate given the amount of work he put in throughout the entire summer.

“We were really starting to see the results during the early parts of the season,” Carlton football boss Brad Lloyd said.

“While Marc won’t be able to have an impact on-field for the coming months, we have no doubt the energy and positivity he brings to our football club every day he walks through the door will continue.”

It is a significant blow for the Blues, who are 4-2 ahead of Saturday night’s clash with battling North Melbourne.

Star forward Harry McKay remains in some doubt to face the Kangaroos after experiencing knee soreness against Fremantle.

Versatile tall Jack Silvagni will be put through a fitness test after sitting out the trip to Perth due to an ankle injury.

Meanwhile Essendon midfielder Darcy Parish avoided a serious ankle injury against Collingwood and hasn’t been ruled out of the Bombers’ clash with the Western Bulldogs.

Parish got his left ankle caught underneath him in the fourth quarter of Monday’s loss but was able to return to the ground late in the contest to finish with 44 touches.

“Scans have excluded significant structural damage, which will mean he remains a chance to play against the Western Bulldogs on Sunday,” Essendon football boss Josh Mahoney said.

“We will continue to see how the discomfort settles in the coming days before determining his availability to play.”

The AFL is weighing up whether to implement another major rule change for the 2023 season, according to general manager of football Brad Scott.…

'All his fingers are wobbling!' Were the Blues robbed by TWO costly line-ball score reviews?

How did the ARC find evidence to overrule the one the Tigers claimed was touched, but not for the one the Blues did? 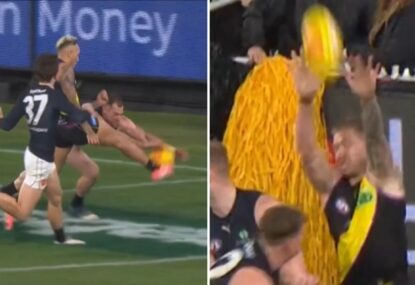 'All his fingers are wobbling!' Were the Blues robbed by TWO costly line-ball score reviews?