While fans of rival A-League Men clubs have been raising glasses of champagne and toasting to the demise of the immensely successful Sydney FC side of the ’00s.

The Moet might need to go back into the chiller, as Sydney look set to bounce back quickly, beating Melbourne Victory to the soon-to-be-confirmed marquee signing of Newcastle Jets star Daniel Penha.

One of the biggest fears of the smaller A-League Men sides is signing a foreign player from obscurity and then becoming a star of the league, only to then watch helplessly as the player signs for one of the bigger sides in the competition the following season.

Losing Penha is an absolutely hammer blow for the struggling Jets, who were starting to look like a side capable of beating any team on their day and getting back to regularly playing in the finals.

Jets fans will have been aware of this rumour of Penha not returning for the past few months, but losing him to Sydney will only add to the hurt.

As for Sydney fans, they will be absolutely delighted with the pending capture of the competition’s best player.

If not for suspension, Daniel Penha would’ve more than likely collected the Johnny Warren Medal, awarded to the season’s best player.

He has been outstanding in a Jets side that blows hot and cold, but the team take a lot of solace in the way they play. The Jets have been one of the best sides to watch this campaign. 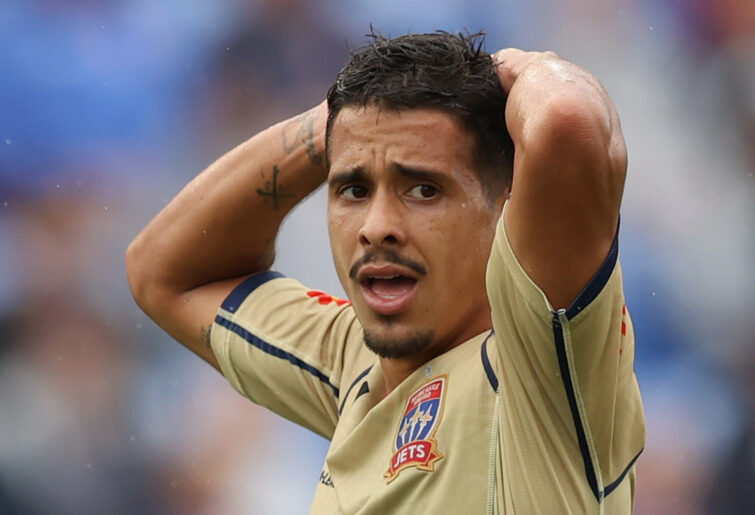 Prior to this season commencing, a lot of people were scratching their heads at the signing of a relatively unknown 22-year-old Brazilian.

Brazilian players have had a very hit-and-miss relationship with the A-League Men, with a lot more failures than success stories.

Jets coach Arthur Papas deserves all the credit for his role in recruiting a player that has spent the last several years on loan in Brazil’s Serie A and B from his parent club Atletico Miniero.

Penha is well known for his dead-ball skills and ability to split defences open with his precise passing.

His overall attacking play is excellent and he has the flair and creativity to bamboozle opponents. He’s also not afraid to mix it up with the physical side of football and energetically presses well from the front.

Penha leads the league for assists with 15 and has also contributed four goals.

One of his best attributes is that he is always looking to push the team forward. Of the 1000+ passes he’s completed, just under 18 per cent have been going backwards.

As I mentioned earlier, he is not afraid to get physical, averaging just under 60 per cent combined for winning tackles, duels and aerial duels. Due to his ferocity he is a regular in the referee’s notebook, with six yellow and two red cards.

He will follow a long line of amazing attacking players who have called the harbour city home, including names like Milos Ninkovic, Adrien Mierzejewski and Siem De Jong.

Penha’s impending signing will help soften the blow of the current Sydney side that has close to 20 players off contract, with many already commencing negotiations with other A-League Men clubs.

Legends of the league Alex Wilkinson, Milos Ninkovic and Bobo are heading towards retirement and the future of under-siege coach Steve Corica is up in the air.

Sydney fans will have every reason to be optimistic heading into next season with the new stadium and Penha’s arrival. However, they will need to proceed with caution and temper expectations while undertaking a costly rebuild.

Playing for Sydney – where success is expected – is by no means an easy task. Many players have wilted under the weight of the famous sky-blue jersey.

Then there is the question mark that remains about how they integrate talented youth into the line-up, which Sydney have not done well since the league’s inception.

Fans of rival sides need to enjoy Sydney FC’s struggles while they can, because Daniel Penha is a statement signing, which should ensure Sydney FC’s demise won’t last long.