guywholikessport
Roar Rookie
11th May, 2022
0
Join the conversation
Advertisement
Write for The Roar

The boxing gym that I train at is just a suburban gym except that it is legitimately gigantic.

You walk in and there’s a reception area, and behind that there’s a big carpeted area with sleds that you push like you used to see Conor McGregor doing pre-ACL. You definitely would not see him doing it now, in his post-cardio and desire-to-compete phase of his fledgling career.

I was doing some one-on-one training and between rounds my trainer and I were talking about the fight that we were eager to end the session to watch. No, it wasn’t the Shakur Stevenson-Óscar Valdez fight, which predictably proved to be an easy win masquerading as a tough fight for Stevenson.

We ended the session and rushed home to watch the fight, and I got in just in time to see the ring walks. The crowd was electric. Barstool Sports was covering the fight, DAZN was there giving it the sloppy but clearly well-intentioned production that it has become known for and the crowd was buzzing for a women’s fight.

It looked to be truly the best atmosphere of any fight in the United States since probably the third Deontay Wilder-Tyson Fury fight.

It was the first time that two women had ever headlined a card at Madison Square Garden. The only women whose names have ever been up on that famous mantle on Pennsylvania Plaza have been artists and singers, never athletes– and certainly never savage fighters in a state that does have a rich boxing history but less than a decade ago legalised mixed martial arts in an octagon, the product peddled by the megalomaniac Dana White.

But here we were, two women fighters headlining the Garden in the room where Jimmy Braddock knocked out Max Baer, where Andy Ruiz improbably knocked out the mechanical Adonis Anthony Joshua and where Joe Frazier beat Muhammad Ali.

This reality got me thinking. Despite the seemingly performative wokeness being peddled by major sporting leagues, fight sports really have done well by women fighters lately. Taylor and Serrano are literally at the top of the sport, but for their recent fights they have been paid in the millions and have become genuine icons.

No AFLW player in history would have touched seven figures and, frankly, no AFLW player except for maybe Erin Phillips or Tayla Harris would have the Q rating or name recognition in Australia that Katie Taylor would have in Ireland or Amanda Serrano in her native Puerto Rico.

Beyond just the Taylor and Serrano megafight, which is likely an isolated event, there is the infrastructure for women’s boxing to carve out real space in the boxing landscape. Serious promoters in boxing are into women’s boxing. Lou Di Bella, who ran HBO boxing for 11 years and now promotes fighters such as George Kambosos and Regis Prograis, is significantly leveraged in women’s boxing and puts on multiple women’s boxing shows a year.

Eddie Hearn and DAZN have also poured significant resources into women’s boxing, recognising the space for growth. Hearn has been promoting women’s fights with the same vigour that he lies about Dillian Whyte’s chances against Tyson Fury or Anthony Joshua’s newfound mental stability.

Women’s fights are regularly on undercards of big main events on DAZN, including those main events headlined by the likes of Canelo Alvarez and Gennadiy Golovkin. I would guess, in fact, that if Golovkin and Alvarez meet at the end of the year, a women’s fight involving a fighter like Claressa Shields or Jessica McCaskill – this would be a welcome relief for those of us who listened to her commentate the Taylor-Serrano fight; she is clearly not over having lost to the GOAT – and would be the co-main event. 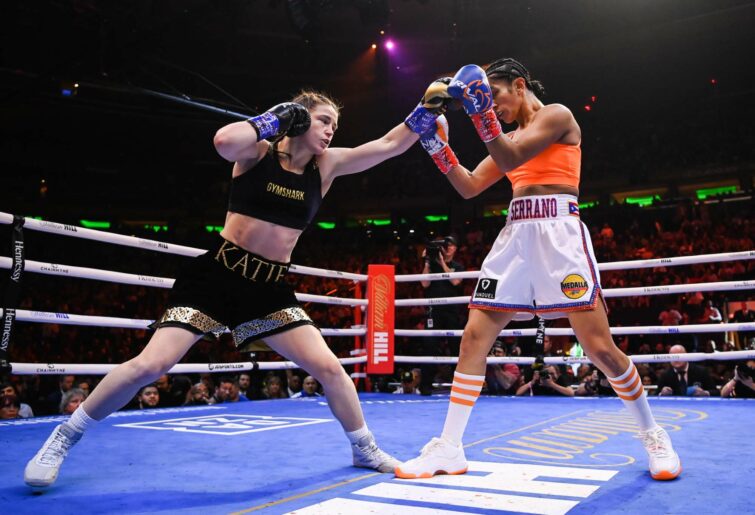 Hearn has promoted every single one of Katie Taylor’s professional bouts and turned her into an icon. Can the AFL say that they have produced an icon on the level of Katie Taylor in the women’s ranks? I would say no, decisively.

Even in the UFC, the organisation which, in my view, has chewed up and spat out more human beings than any sporting league on planet earth in the last 15 years and turned into an extraordinarily profitable business, was built on the back of a female fighter. Ronda Rousey, before she was knocked out and mentally demolished, was possibly the biggest single-sport athlete on planet earth.

Beyond just Rousey, women’s fights regularly make their way onto PPV cards, and fighters like ‘Thug’ Rose Namajunas and Valentina Shevchenko are becoming genuinely famous and responsible for significant revenue generation – though of course they are no doubt getting stiffed on fighter pay and will get no health insurance when their careers end.

More than that though, women recently have not been talked down to when discussing their fights. Taylor versus Serrano was a genuine epic and was discussed as such. So was Namajunas versus Zhang Weili. Even a fighter like Ebanie Bridges, famous for being scantily clad in weigh-ins as a way to sell fights, is talked about like a fighter when it comes time to talk about her fighting and not her particular method of self-promotion.

They are not ‘improving’ nor are they ‘better than you expect’; they’re just fighters, and they’re discussed as such. When they fight badly or there is a bad fight, it is decried as a bad fight and we move on. This doesn’t happen in AFLW, where any criticism of gameplay or tactics is construed as misogynistic. Even in women’s football in this country you are not allowed to criticise the Matildas because they are so well liked, even though they consistently underperform in big tournaments.

That is not to say that fight sports are some post-gender utopia where everyone is just discussed on their merits, because that is certainly not the case. The comment that I am making is more around the coverage of the sport in the mainstream as opposed to the normal chauvinist who roams Twitter looking for things women do so that he can manufacture some criticism.

It’s just to say that for all of the foibles of fight sports chewing up fighters and spitting them out, leaving them broke and broken, they have done a good job of providing a platform for female stars to flourish in a way that other sports, which are trying to do the same thing, have simply failed to do.