matth
Roar Guru
17th May, 2022
29
Join the conversation
Advertisement
Write for The Roar

The criteria for selection are that there can be no representation at senior level – that includes internationals, State of Origin, Prime Minister’s XIII, city vs country or All Stars – and current players are excluded.

Where a player has played for more than one club, they’ll be counted only for the team for which they played the most first-grade games.

This side is similar to the recent North Queensland team I selected. There are a lot of extremely good long-term footballers from an unfashionable club ignored by selectors.

A former Super 12 rugby player with the Waratahs, Milton Thaiday had three injury-riddled season with the Knights but showed glimpses of his talent, scoring 14 tries in just 29 matches. He retired after a serious injury in 2007, aged just 27.

Grogan played five seasons for the Knights and appeared in their finals series in 1994, 1997 and 1998, although he unfortunately missed the 1997 grand final.

Grogan moved to England in 1999 and played for the Gateshead Thunder before returning to Australia for a final season with the Northern Eagles.

Tony Herman was a solid player for the Knights, playing in their first-ever finals series in 1992. His best season was his last, playing 23 games and appearing in the Knights run to the preliminary final that year.

Glenn Miller joined the Knights for their entry into the NSWRL after playing four games with Penrith over two seasons. Miller proceeded to play over 80 games in five seasons with the Knights. He got to play finals with Newcastle in 1992 in his final season before retiring.

Miller is a plumber by trade, and this came in handy in the club’s early years before they had their training ground – once had to break into Passmore Oval in Wickham with a pair of bolt cutters from his truck to allow the side to train.

Former Redcliffe player Jeff Doyle was another from the Knights class of 1988. He spent four years at the club before having stints at North Sydney and the Western Reds to play over 130 first-grade games. He also found time to spend a season with Hull in the English competition.

After retiring, Doyle coached the North Beach Sea Eagles in Western Australia to a premiership before moving to Queensland and owning a series of McDonald’s restaurants in Roma and then Townsville.

With a couple of players by the name of Johns fairly prominent in Newcastle, you might think it would be hard to find halves for this side, but here we have Sean Rudder, a local junior who played six seasons at the club in the Johns era and played over 22 games in five of them.

Rudder came into the first grade in 1998, the year after the Knights ARL premiership. He proceeded to play a prominent role as the club played the next six finals series in a row, highlighted by their 2001 grand final upset of Parramatta, with Rudder at five-eighth producing two try assists.

Rudder left Newcastle for England in 2004, playing for Castleford and then Catalans, before returning home. He also found time to play rugby union in Japan (for the superbly named Ricoh Black Rams), France (Perpignan) and Australia (Southern Districts) before finishing his playing days with Newtown in the NSW Cup, reaching a grand final. In 2008 he received a one-game call-up for a final NRL game with the Sydney Roosters after a 1749-day break from the NRL.

Even then the football bug was still there, and Rudder has turned out for Wests Newcastle and Merewether Carlton rugby union.

Steve Fulmer was the starting halfback for the first three seasons as the Knights entered the ARL competition. Fulmer was a solid playmaker for the side and won the club’s best and fairest in 1990. After retiring, Fulmer spent some time coaching and recommended the next player in this side to the club in 2004.

Billy Peden is an absolute legend of the Newcastle football club and is the only non-representative player to have lined up for both of the club’s premierships in 1997 and 2001. He is also the only player who played in the club’s first premiership, in reserve grade in 1995.

Peden joined the club as a mature 24-year-old, having already played over 100 games for Cessnock, where he later was named in their team of the century.

In 1997 Peden, who was primarily a lock or second-rower, was shifted to hooker for the final two games of the season, scoring a try in the preliminary final. They were his only two appearances at hooker between his debut in 1994 and his final season for the club in 2002.

Peden scored two tries from lock in the Knights’ shock 2001 grand final victory over Parramatta, after which he came up with the famous quote, “The sun even shines on a dog’s bum sometimes”.

After finishing with the Knights, Peden played a season in England with the London Broncos.

Peden could have so easily been lost to the Knights after trialling with Parramatta and Canberra, where then reserve-grade coach Craig Bellamy sent him a letter saying he was not quite good enough for first grade.

And no-one should forget that Peden made his film debut as an extra in that critically acclaimed masterpiece Young Einstein in 1988 (at least according to Wikipedia). 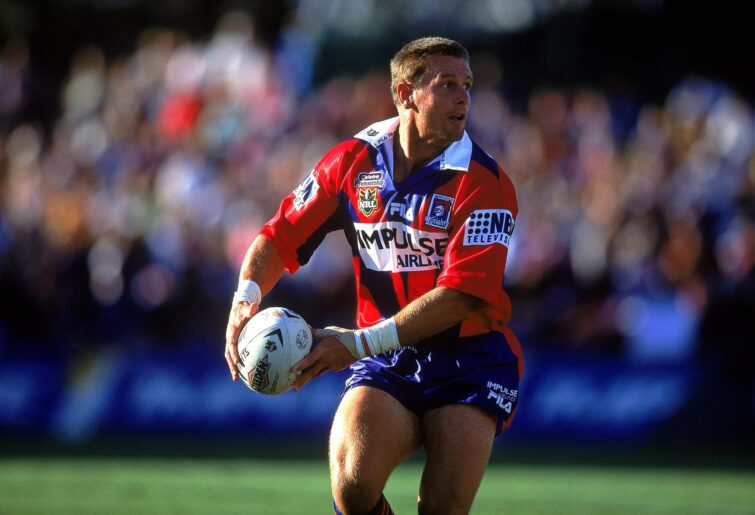 Paul Marquet is one of the most experienced players in all of these articles, notching up 231 first-grade games in Australia. Marquet debuted for the Knights in 1990 and left after 110 games and a player of the year award in 1995 to play for the Hunter Mariners in the breakaway Super League competition. After the Mariners’ demise, Marquet spent three seasons at the Melbourne Storm, where he was a member of their 1999 grand final-winning team.

To show that all wounds can heal, Marquet was welcomed back to the Knights in 2001 just in time to win the 2001 premiership after the veteran appeared in 27 matches for the season. He then finished his career off with a year in England for Warrington.

David Boyd was another member of the Knights inaugural squad in 1988 after playing eight games for the Bulldogs, including their 1986 grand final loss to Parramatta.

Boyd Played for Newcastle for six seasons and appeared in the club’s 1992 finals campaign before moving to England with Halifax. He was lured back to Australia to play in the first season of a club for the second time, this time with the Western Reds. In 1997 Boyd returned to England with Hull.

In 1993 Boyd became one of the first players to appear in 100 first-grade games for Newcastle, along with Michael Hagan and Marc Glanville.

Peter Johnston was a journeyman who played for Canterbury and Eastern Suburbs for a combined 37 matches and spent a season in England with Hull before joining the Knights in 1989. Johnston appeared nearly 50 times over the next three seasons. Oddly, he scored five tries and kicked 16 goals in his first season at the club and never scored another point thereafter.

Johnston enjoyed a hectic year while in England. He appeared in a Challenge Cup final, losing by a point to Castleford; a League Cup trophy, losing to Wigan; and won a Yorkshire Cup over the Castleford.

I could have thrown Matt Hilder onto the field anywhere and he would have done a great job. Blessed with a beauty of a nickname, ‘Waltzing’ also has a very solid record of 201 first-grade games, firstly with Cronulla and the Gold Coast before over 100 matches with the Knights, including their 2009 and 2013 finals appearances. Hilder won the Knights’ player of the year in 2010.

Hooker David Mullane played for the Knights between 1990 and 1993, including in the club’s first-ever finals series in 1992, by which time he had moved to the second row to accommodate Robbie McCormack. Mullane scored two tries in his debut season and never scored another point. His last game was Round 4 of 1993.

Lock forward Reegan Tanner played five seasons with the Knights. He appeared in finals in 2003 and 2006 and was the only Knight to play every game in the 2005 season. Tanner was let go in 2007 – the year Brian Smith had problems with a few players – and returned to playing for the Kurri Kurri Bulldogs in the Newcastle competition and working in the mines. He played on for a number of years and retired after 2013 after playing in a grand final and winning the player of the year award.

Peter Shiels had already turned out for Penrith, Wests and the Western Reds before he played three seasons with the Knights from 1998, where he played finals footy each season.

After leaving the Knights, Shiels spent two seasons in England with powerhouses St Helens and was part of their teams that win the 2001 Challenge Cup, the 2002 Super League grand final and defeated the Brisbane Broncos in the 2001 World Club Challenge.

If you search for Shiels on the internet, he is most known for a fairly spirited punch-up with Canterbury’s Robert Relf during the 1998 finals series.

Troy Fletcher appeared on the bench in the Knights’ 1997 grand finals win after appearing in all but one game for the club that season. Overall he played six seasons for Newcastle, mainly as a bench player. Like many Newcastle players, after finishing with the Knights, Fletcher played in the Newcastle competition, turning out for West Rosellas as captain-coach and winning premierships in 2002 and 2004.