Hugh_96
Roar Pro
23rd May, 2022
39
Join the conversation
Advertisement
Write for The Roar

We should provide the Australian women’s sevens team with some serious recognition.

They are one of the best national teams Australia has, consistently demonstrating unbelievably high levels of athleticism and skill.

Before the Toulouse sevens in France, the biggest issue for both the Australian men’s and women’s sevens teams was consistency.

The women made it to the final, losing to New Zealand, while the men lost in the quarter-final.

So arguably the women kept up the consistency and the men dropped off a bit and will now need to refocus for London later this week.

Note the men were the first Australian team to beat a New Zealand team on the weekend, beating New Zealand in the pool game, which knocked New Zealand out of making the quarter-finals for the first time ever.

The biggest challenge for the men’s program is not having a full-time squad. Maybe nine are full-time players, then they have had to pull in four to five players from club rugby to fill in.

Of the 20-plus players they have used, only six have played in every tournament. Even so, Australia is in third place on the standings so they have done a great job.

For the women, what a year it has been. 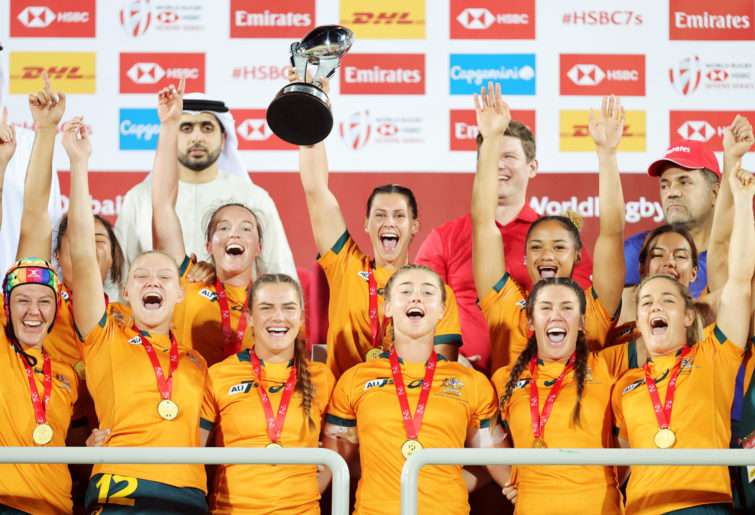 I should also add the Aussie sevens women were the first Australian national women’s team to wear a unique First Nations jersey.

So for the women, it has been an exceptional year, no matter how you want to dice it up.

Probably one of the significant highlights has been the development of the players considering how young they are. Take out Caslick and Sharni Williams and the average age of the squad on the weekend was 20.5 years old.

The athleticism of the team must be mentioned. Across the board, all of the women are really, really fit.

They can run all day, they all have highly effective tackle techniques, they all can pass under pressure and most are pretty fast once they get in the open. Some like Faith Nathan are extra, extra fast.

Enough has been said previously about Caslick. She is far and away the best women’s sevens player in the world, so I will not add any more.

They are playing with not just great skill and pace but high levels of confidence and footy smarts.

The youngsters get a lot of the attention but the leadership being provided by the old heads Williams and Caslick has been outstanding and no doubt critical to the success.

Lastly, I probably should mention the leadership of 23-year-old Demi Hayes. She was made captain at the beginning of the season, then co-captain with Caslick.

Not only is she performing on the field, she is obviously delivering off the field for the team with her leadership.

Next stop for the women is in July with the Commonwealth Games, then the Sevens World Cup in September.

These are a couple of side issues.

You can bet some NRLW teams will have been watching these women play, so I wonder what will happen after the Commonwealth Games and the World Cup later this year. Let’s hope Rugby Australia has some plans in place.

Back in the commentators’ booth was former sevens player and Parramatta NRLW player Tiana Penitani.

She is an outstanding commentator. She provides explanations of why things have happened on the field. She is a real subject matter expert and not just an Aussie team flag waver.

The other commentators are good but mainly just provide colour and excitement.