It turns out the Dockers are still premiership contenders after all.

In another example of an extreme overreaction to results, it was but a mere fortnight ago where Fremantle was called out for being “fake contenders”, following consecutive losses to Gold Coast and Collingwood.

Sure, the results were disappointing and there were negative aspects of the performance to take out from it, disregarding the first two months’ worth of games was always going to make many look silly in the long run.

Of course, since that loss to the Magpies, the Dockers have only gone and beaten the league’s top two teams, including the marvellous victory against the reigning premiers away from home.

Preseason predictions of the Dockers sitting inside the top four by their bye look to be accurate, but the way in which this team has been functioning goes beyond statements made months ago.

The team remains miserly on defence, on another level above the rest of the competition along with Melbourne, and have proven that they have an offensive switch that is utterly dominant and not contingent on star players having heavy involvements to put an opposition team to bed. 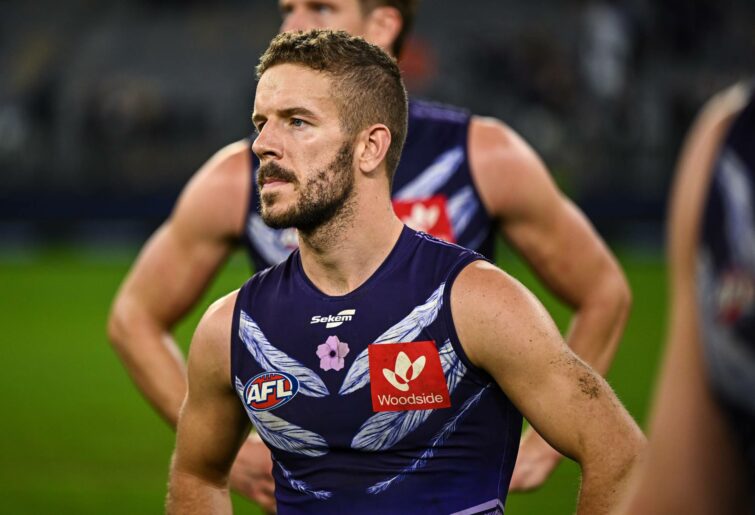 To celebrate the good, we must acknowledge the bad that came with the two losses that sent the AFL world into a slanderous spin.

Clearly, the wet weather had an impact. The Dockers have only dealt with inclement conditions twice, in these two games where they lost to teams that may fight for the eight, but are more realistically within the 9th to 12th range.

Where a team that had been handling games with relative ease should’ve been dominant, they lost both games by six goals each and never looked like winning.

While the real response to how the handle these conditions will only come in the future, having two wake-up calls feels more beneficial than demoralising.

The issue with the Dockers against the Magpies and the Suns was simple – instead of playing with the speed and directness that puts even the best teams in the competition to the sword, a natural response to wet weather, Fremantle played an extremely insular style of football.

Fremantle’s season kick-to-handball ratio is 1.38:1. Against the Suns it was 1.28:1 and against Collingwood, it was 1.24:1. Naturally, the games were played in a more contested manner, but the Dockers completely over-possessed and didn’t seek to get the ball forward, but rather stuck with a more retentive style.

They brought pressure onto themselves by trying to share the ball in close and were punished by teams that have prided themselves on efficient offensive ball movement and tackling this season.

Against the Suns, when the game was petering out, they started to hammer the ball aimlessly inside 50 which resulting in a +29 count. Against Collingwood, they overcorrected and got stuck, finishing -14 in the count.

Given the issues here were more in method and approach rather than skill, these are very fixable and with a good coach at the helm, we can expect the next wet weather game to be far more direct form the Dockers.

We know that this fortnight didn’t have any negative influence on matches against the top two teams in the league.

When people ask what the real Fremantle looks like in 2022, it should be universally accepted that it’s far close to the performances against Melbourne and Brisbane, rather than those against Collingwood and Gold Coast.

It was a demolition of the Demons. 58 more disposals, 10 more clearances, 56 more marks and four more tackles.

They took 17 contested marks, seven above the season average and kept Melbourne to 36 less disposals, 15 less marks, four less marks inside 50 and six less clearances than their season average. Fremantle’s kick-to-handball ratio was 1.88:1.

The Brisbane game was built on trying to negate the directness of Brisbane that has torn apart many teams. Fremantle dominated clearances and uncontested possessions and looked to keep the ball in tight rather than move out onto the spread.

Aiming to be defensively absorbent and driving the kick-to-handball ratio down to 1.31:1 to keep it tight, the Dockers restricted the effectiveness of the Lions’ ability to take ground.

Brisbane played the style they desired on the outside, but their worst clearance differential since 2019 meant that a lot of the work had to be in full-ground transition, rather than a basketball “half-court press”.

Crucially, this is indicative of a Fremantle team and coaching staff that learns on the run and is tactically sound and intelligent. They’re built on defensive strength and had dominant third (premiership) quarters to smash the two top teams in the league.

And how about that sign of a genuinely strong team that we’ve discussed frequently throughout 2022? Premierships are won with deep squads and by the role players improving the floor of a team, as has been the case for at least the last decade.

Against Melbourne, the Dockers got six goals and four goal assists out of Lachie Schultz and Michael Frederick. Against the Lions, it was nine goals out of Bailey Banfield, Griffin Logue and Frederick.

Both these offensive flurries were done with half a game from Matt Taberner.

Capping it all off has been the past fortnight’s worth of results for Peel Thunder, beating former powerhouses Subiaco and Claremont with excellent performances from depth players like Josh Treacy, Karl Worner, Liam Henry, Lloyd Meek and even the forgotten Joel Hamling, while Sam Sturt is still trying to find his best footy.

That Nat Fyfe looks a player too.

The masses tend to overreact to results because there’s a demand for immediate thoughts, which promotes the lack of broad picture viewing.

Just as Sydney’s bad couple of weeks turned out to be a blip, which will end up being the case with Melbourne’s awful fortnight, Fremantle has proven that they are one of the best teams in the competition by how they’ve navigated through a bit of pressure.

With a style that is adjustable and adaptable to both the opposition and game situation, there aren’t many teams as dangerous as the Dockers in full flight. This week’s game against Hawthorn, expected to be in wet conditions in Perth, should provide the answer to the one lingering question over them, given their recent struggles in the rain against Gold Coast and Collingwood; but a win would instantly put those fears to bed.

Andrew Brayshaw is a Brownlow contender, Brennan Cox and Blake Acres should be seen as at least a contender for the All-Australian squad of 40 and at least one small forward is stepping up every game on the scoreboard, a feature some teams can only dream of.

Fremantle supporters are rightfully bullish and growing in confidence, particularly as expectations continue to be exceeded against the stiffest of challengers.

The post-bye fixture will serve up difficulties too – Carlton (away), Port Adelaide, St Kilda (away), Sydney, Richmond (away), Melbourne, Western Bulldogs (away), West Coast and GWS (away).

Yet any curveball thrown at Fremantle can be handled confidently, with this playing group proving its legitimacy beyond any doubt with flexibility and mental toughness.

There’s no need to imagine the Dockers being top four after Round 14 anymore, now that reality has set in.

Freo are looking at their competitors from high above and are certainly on track to reach those greener pastures come September.