The jungle drums are beginning to beat for Alastair Clarkson return to his first VFL/AFL home as coach of North Melbourne for the 2023 season.

While on the face of it this is a coup for the Kangas – his appointment will please sponsors and the AFL, appease unhappy players and attract recruits – what else does Clarko bring to the table?

He left Hawthorn in less than ideal circumstances, having presided over a list build that has, subsequently, left plenty to be desired.

Tom Mitchell, Jaeger O’Meara and Chad Wingard were traded in at the expense of high draft picks and a promising player in Ryan Burton.

While each of these players has performed solidly – Mitchell of course won a Brownlow in 2018 – it’s also up for debate whether any of them will be a key plank in Hawthorn’s next premiership side.

But the real discussion needs to be around what kind of coach the Kangaroos actually need. If we assess the premiership coaches of the past 20 seasons then the following stands out.

1. Only three (Leigh Matthews twice and Mick Malthouse) of the past 20 premierships have been won by coaches who had coached another team prior to the team where they won a premiership

2. Only three premiers have had a coach aged over 50 (Matthews twice and Malthouse again)

3. Whilst there are outliers, it appears to require six plus seasons of building up to that elusive premiership, and those outliers generally come with some pretty clear circumstances.

Paul Roos took over a relatively experienced Swans team that had made finals in 2001, and made a preliminary final in his first full year in charge (2003). Clarkson, whilst he inherited a basket case off-field, already had a few future Hall of Famers on his list, and added three more in the draft only a few weeks after he was appointed.

Whether the Hawks ended up with Jarryd Roughead and Buddy Franklin by accident or design depends on who you support!

Chris Scott inherited a team with a bunch of all-time greats still in their prime for his 2011 premiership. John Longmire was the long-time heir apparent to Roos at Sydney; say what you like about the deifying of Roos in the football media in the years since, he did not squeeze every last ounce out of that list prior to his departure – Longmire still inherited an excellent team.

More recently, Adam Simpson and Simon Goodwin both saluted in their fifth seasons in charge, but Simpson was appointed to the best-resourced club in the land and Melbourne had about a dozen top ten picks as well as a few years of Roos, which allowed Goodwin to inherit a team that had already had its worst years. Given that, there are probably two questions that need answering now:

1. Are the Kangaroos anywhere even close to having a list that compares to Goodwin’s Demons six years ago?

2. Do the Kangaroos have the off-field capacity to handle someone like Clarko?

It’s difficult to mount an argument for the Kangas’ list even being in the same stratosphere as Melbourne’s when Goodwin took over.

Jason Horne-Francis is a number one pick, and whilst we haven’t seen the best of him this year, his form against men in 2021 in the SANFL was utterly compelling, and it’d be a brave person to bet against him being a star of the future.

Beyond him though, players like Luke Davies-Uniacke, Tom Powell, Curtis Taylor and Bailey Scott are all showing signs of being more than handy players. They are supported by a pretty good bunch of slightly older types – the likes of Nick Larkey, Cam Zurhaar, Jy Simpkin, Ben McKay and Luke McDonald.

The unknowns are Jaidyn Stephenson, Tarryn Thomas and Will Phillips – the first two have talent to burn but their application hasn’t matched that talent, whilst Phillips just hasn’t gotten on the park due to glandular fever and other injuries that have derailed his year.

Whilst there are plenty of solid citizens amongst that group, I don’t think we’re seeing quality or depth that compares with Max Gawn, Christian Petracca, Clayton Oliver and co. at the Demons.

Ed Langdon was also added in that off-season, basically for a second-round pick.

What this shows is that, as much as Kane Cornes wants to tell everyone you can’t rely on the draft alone, you also need to identify gaps in your list where a more mature or experienced player will be beneficial. Melbourne, like Hawthorn in the mid-2010s, have done this very, very well. 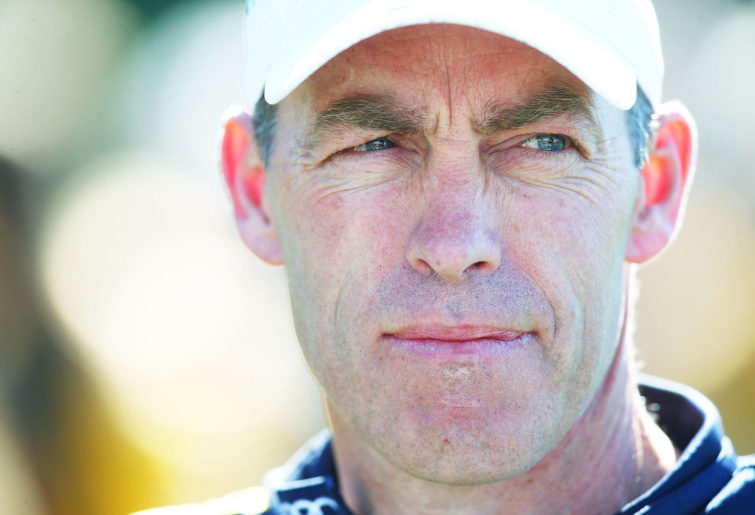 The crux of the problems with hiring Clarko might be his desire, as will be his right, to bring in his own team.

There will probably be an overhaul of the strength and conditioning coaches, the medical team is likely on borrowed time, and anyone who’s an assistant coach currently may as well be trawling SEEK for their next role… but it’s on the administrative and football operations side of things where Clarko has really made his presence felt, rightly or wrongly, in recent times.

In Hawthorn’s peak years, he had Stuart Fox as CEO, Chris Fagan as his footy operations director, and Graham Wright in charge of the list. He trusted all these men, and each of them was able to push back on him and keep him in his lane when required.

When Fox left for the Melbourne Cricket Club and Fagan took over the battling Brisbane Lions, Clarko’s power base expanded significantly; seeing as he’d just presided over three straight premierships, he was allowed to effectively do as he pleased.

We don’t have to worry about Clarko coming in over the top of the recruitment team at the Kangas – because there isn’t one – but are Ben Amarfio and Brady Rawlings likely to have the ability to stand up to Clarko? Will he respect them enough to listen?

So, with all that said, what should the Kangaroos do?

Clarko has said he wants more silverware, so unlike Roos at Melbourne, it’s unlikely that he’ll come with a three-year plan that involves handing over to one of his assistants at the end of 2025.

If the Roos do appoint him, it will be on his terms: in the short term he’ll improve them by making them more effective defensively, and there won’t be any doubting the path that they’re on.

But is he the man to take them to a flag? Buyer beware…