Love it or hate it, T20 cricket is here to stay. While I don't have any specific problem with this format of the game,… 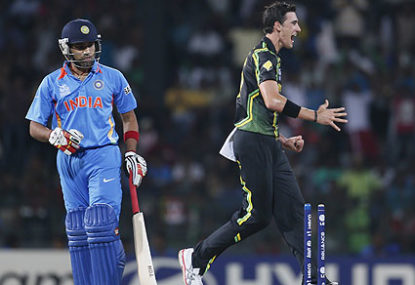 Yep, agreed. Watching England, they do seem like a more relaxed team now.

I think the change in attitude is the key. With Root as Captain, the team seemed nervous and more worried about making mistakes than playing their natural games. Under Stokes, the players seem more confident and calm…they’re enjoying playing.

But, its England in England. Their bowlers are always tricky on English pitches. India will be a test, and then we have to see how they play away from home. And what happens after Broad and Anderson leave is still a big question mark…

This is an amazingly offensive and uninformed comment, and I’m shocked at this article overall.

Between 2010 and 2018, rates of sexual assault victimisation recorded by police for Australians aged 15 and over, rose by more than 30%. This is because women have a voice and are now talking up. The problem is, men like you dont want to hear it.

Stats now tell us that 1 in 6 women have been sexually assaulted in their lifetime. This is a huge social issue, which to you, is apparently ‘hysteria’.

And maturity isnt an excuse. Males aged 15–19 have the highest offender rates of sexual assault of any age group, but according to you, that’s perfectly acceptable because everyone does dumb things when they’re young.

I’d love to hear you explain this to a room of women who’ve had to deal with the consequences of experiencing sexual assault at that age. And it wouldn’t be hard to fill a room with such women, unfortunately.

I wouldn’t worry, Rob…Jaeger has previously floated the idea of a “Polynesian NRL World Heavyweight Belt and an Australian rugby league Super Bowl”, which includes a team called the “US President’s Barbarians” with three games in Hawaii.

So relatively to Jaeger’s other ideas, this one seems pretty sound!

Yeah, there’s something about the backrow group of Kaufusi, Capewell, Murray and Tino which looks good, but not great.

If he actually played to his full potential, David Fifita would be the perfect player for this team, but his form doesn’t warrant consideration.

I know its early days, but maybe Cotter should come into the team?

I’d also swap Gagai for Cobbo and bring Val into the centres.

A Fittler quote from today: “We need to pick some players who are going to win. It’s all based around winning State of Origin.”

My favourite is Freddy’s quote on Sims being dropped: “We really appreciate what he’s been doing but we’re looking towards the future”

Less than a month ago eh said: “Tariq played all three games for us last year, and I just like what he’s about. He’s not too old. I’m old.”

Apparently Sims aged terribly in the past 2 weeks…

Yeah, it felt like move forward this year, but then Game 3 happens against the Grizz and I dont know what to think about him!

Yeah, that’s probably fair enough…But at least Walters will now be in a better position to ask for more money!

Then my definition of an ‘explorer’ is different to yours. I use the definition in the dictionary “a person who explores a new or unfamiliar area.”

Nothing about claiming possession of these new or unfamiliar areas, especially when another peoples are living in these areas.

He wasn’t ‘just’ a navigator and explorer though! That’s the whole point.

He took possession of Australian in the name of the King of England…He didn’t just navigate the Australian coastline and explore the land, then go off on his own way. He claimed a land that was never his to claim and by doing so, has a part of play in the subsequent treatment of Indigenous Australians whether we like it or not.

Surely you can see though, how there is a connection between Cook first arriving and claiming possession of a land that wasn’t his to claim, and the subsequent invasion, dispossession, cultural destruction, and segregation of Indigenous Australians that followed afterwards?

“Cook was an explorer and had nothing whatsoever to do with colonisation or the establishment of Australia.” This is simply not true and why the trophy needs a name change.

Cook himself wrote: “Notwithstand[ing] I had in the Name of his Majesty taken possession of several places upon this coast I now once more hoisted English Coulers and in the Name of His Majesty King George the Third took possession of the whole Eastern Coast from … New South Wales together with all the Bays, Harbours Rivers and Islands situate upon the said coast …”

They also owe a thanks to the Ref for the sin-binning of Amone.

I think because the Dragons were so far in front, no one cares too much, but Amone barely held back Walker, who was in front of the Souths player with the ball anyway! Was an amazingly bad call, especially given the Dragons hadn’t committed any professional fouls beforehand.

The Dragons could have put on 50 had Amone stayed on the field and their momentum sustained.

Lets not overlook the role and impact of Ben Ikin here also…as Head of Football, Ikin has been responsible for lots of the roster moves the Broncos have made, almost all of which have worked out.

Kevvie has been great, but last year the Broncos went 7-17. They were so desperate they signed Karmichael Hunt. This year, with Ikin at the helm, they made one good decision after another.

I agree Kevvie should get a longer term deal now, given the teams performance, but I can totally understand why they didn’t commit to him from the get go…

I know a lot of these lists are subjective, but the only one that stands out to me is KAT. I cant see a way he ever gets to a level of greatness. I think he’s a fringe All-Star and that’s about it.

The same is probably true of Donovan Mitchell, but think he needs this year to prove what he can do.

Can we all agree to never ask for Gallen’s opinion on anything ever again? Thanks

Coaches comments are always the best. Brad Arthur also said: “We had a plan today, we wanted to run hard through the middle and run for more metres and the footy will come off the back of it.”

So…The plan was run for more meters than the opposition and run up the middle, and then just expect stuff to happen. Brilliant!

Tony, I think you’ll find Freddy’s reasoning for selecting Sims is rock solid: “Tariq played all three games for us last year, and I just like what he’s about. He’s not too old. I’m old. He’s always done a job for us. Players always look better in better teams.”

In other words, I picked him because I like him and he was there last year. Brilliant.

Was interesting listening to Brandy last night. He said the plan wasn’t to play Martin for the full 80mins, but the Yeo head knock meant he had to stay out there.

I think playing a full 80mins was a bit too much for him. Hopefully in Game 2, he can have more impact in fewer minutes.

He played the full 80mins and had 7 runs for 31 meters…not great for a ball-running backrower. In comparison, Materson played 36mins and had 10 runs for 77 meters.

Yes, Martin made plenty of tackles but is that what he’s there to do? If NSW want a tackling backrower, surely Jurbo is the one to pick? I’m not sure what Martin offers as an 80min player…impact guy off the bench is fine, but playing him the full 80mins was bizarre.

Agree that NSW have to figure out how to free up Cleary and Luai.
The stats from last nights game were pretty similar across the board, but ‘run meters’ by the halves was telling…Clearly and Luai combined had 78 run meters vs DCE and Munster at 231 meters. That’s a massive difference.
I’d also have to think Sims drops out of the team. I understand he’s done a good job in the past, but he wasn’t up to the task last night, and NSW have better options. Materson had more tackles, more post contact meters from the same number of hit ups and the same number of runs, in 20 less minutes.

I fail to believe that anyone with a degree of common sense from NSW thought these Qld teams were ‘inferior’.

One thing not being talked about much on the DCE try, was Sims making the completely wrong call on defense. Paulo being held back wasn’t really the issue…DCE was Sims man to take and he blew right by him…

“QLD have always been viewed south of the border as an inferior team.”

Seriously??? I think losing 11 out of 12 series might have changed this line of thinking for most NSW fans…