2020 will be 30 years since the beginning of the AFL era and it’s still not a fully national competition. Tasmania, the Northern Territory and Canberra still do not have their own teams. 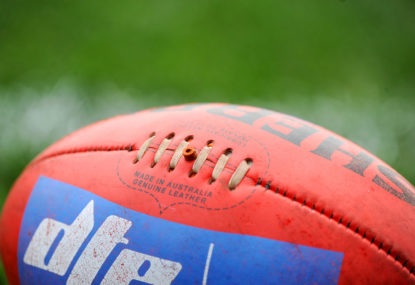 I have never been so disappointed in the Eagles. Sure we have put in some terrible efforts but I have to say that was the worst I have seen in the last few years. You don’t expect them to win every game but you least expect them to try. 30 odd tackles in the whole game. Disgraceful. Poor Hurn he deserved so much better from his team mates.

Yes those disgraceful few who always get the attention and you label all with the same brush. Again your intelligence is lacking greatly. By the same reasoning all Catholics are guilty of the IRA atrocities or all Muslim’s guilty of the terrorist acts. Geez you are so short sighted it is incredible. These maggots bring shame on all Football fans the world over and hopefully will be dealt with harshly as possible. As I said the normal and decent English fans are appreciative of the World game delighting in the skills and prowess of the Argentinian’s, Brazilians and Spanish and Italians as well as being proud of any achievements of their own team. I suggest you get your mug out of social media and get back into the real world.

Ridiculous arrogant comment yourself pretty much all the English fans I know always play down their team. Always. Shows how ignorant you are of the reality of English fans.

I understand I have already stated Italy were the better team. I also stated England need to hang on to the ball better and become more comfortable with the short precise passing like the European teams. It’s not far off from them doing that. Sterling is a fabulous player if he just stops falling over all the time way too easily and that goes for Kane too. Younger talents such as Grealish Rice and Phillips and stoic defenders like Stones and Maguire are also vital to the team. I am not sure if Jane is better suited as a playmaker or an out an out striker. As a striker he needs to get quality supply. Luke Shaw and Grealish passes in the Ukraine game are prime examples. There is no reason England can’t play like that against the top teams. The early goal proved that England are capable of quality passes to unlock any defence in the world. They needed more of that but in order to do that they must retain the ball much better. They are not that far off. A midfield maestro type player and a brilliant passer of the ball like Beckham used to be are probably what us needed. England have won a couple of Youth World Cups. They have a bright future and need fear no team. Sure they may let in goals but they just need to score one more than the opposition. With their attacking weapons they need to learn how to adapt and deploy these. All credit to Italy they deserved to win but England are certainly not going away.

Agreed they were the better team. England need to learn to hang on to the ball better but we have technically gifted players Phillips and Grealish and Rice for example. Even Kane. A few more tweaks and we will be competing deep into major tournaments for some time

You belong in a psychiatric hospital if you think that mate. Australia ha. If you put some money and interest into the world game you might have a point. Australia will struggle for at least another 100 years for sure .

Hahahahaha Australia you have got to be on another planet mate. England are up there with the Italians Spanish Germans French Argentinians and Brazilians you will see.

Yes I would have made your life a misery but of course you never read the whole response. I said Italy were favourites to win but England would give them a good run for their money. Indeed they did and I’d it wasn’t for poor judgement on their managers behalf would have come through. Sour English hating sooks like you are two a penny. This England team has done brilliantly and has the mighty Italians on the ropes for at least the first half hour. So as time goes kn I will talk up their talents every chance I get to balance out your whining and sooking. Proud of England a few more tweaks and we should not fear any team. Let’s see what happens at the WC.

Out of all his experience regarding finals and teams Southgate had not learnt much. It’s always the same after you go 1 goal up you cannot drop back too deep. England basically begged Italy to get the equaliser. England outdone by their predictability again. It’s such a shame because they have the personnel to do some damage but it just wasn’t there after that early goal. Southgate did nothing. He is as much to blame for the loss as anyone.

Forget about baseball then but the rest is certainly valid

Own goals are legitimate and skilful in the fact they occur because of the immense pressure of the attacking team. There is certainly no shame in celebrating an own goal.

Geez we are talking about the modern game aren’t we unless you know of anyone playing the Chinese original game. Your intelligence and prejudice in equal measures astounds me.

The hatred of English success in any sport is well and truly alive. I sure hope England do win so that can be shoved down the throats of all your constant whining and negativity. If it were Australia playing do you think the debate about the penalty would gain any traction? No way they would be hailed as heros don’t try deny it. The English laid down the rules for Association football. Not Italy Not France Not Brazil or Germany or China. Hence its correct association that England is the birth nation of the game. Get used to it as this can not be denied. It’s the same for Rugby, Cricket and Tennis and you could say indirectly baseball which was based largely around a game called rounders.

This England team have earned the right to be in the Final. They may not win which I am sure all you who are whining like spoilt kids will revel in but they should give Italy a good run for their money.

Just because the English are starved of sporting success most of the time you lot claim arrogance as some sort of justification. Well it only provides much laughing and entertainment value for the England fans the more and more you whine so let’s have it. I can tell you if England do win many fans especially me will be reminding you every day for a year, hopefully. Something well worth looking forward to.

What you going to do if England win then bang on about how boring they were or how many advantages they have blah blah. Geez s massive chip on your shoulder man. Give it a rest and enjoy the great football being played. Italy are awesome and my heavy favourites. Denmark are playing on emotion and are dangerous. Cant yet write off Spain completely either even though they will probably get done by Italy. It would be a great result to see the Danes take it all the way. However England are playing to a plan and of course that could come unstuck as history had shown. This team though seems to have made their own history. No doubt you may have been one of the haters when England won the Rugby World Cup it wouldn’t surprise me. On that note I hope they do win so I can bug you about it every day. That would be hilarious and most satisfying.

Shut up please you are boring us with your constant whining Geez get a life you have nothing better to do than bag the English. If you are from Adelaide the most boring city on the planet that explains this.

I think Italy might pull it off. They are determined since missing out on last World Cup. Love it to be England but we can’t trust them from past tournament results.

Unfortunately I’m writing off the Eagles now. I cannot see them reddening themselves unless they give a top 8 side a real pasting. Simpson still living in the 2018 miracle. Sorry Simmo it’s high time to move on. Get your players running and tackling hard in contested ball all 4 quarters and working their backsides off to get the ball to the very talented forward line. If you can’t do that get back to drawing board. Richmond are going through a rough patch but they have a relatively comfy ride to the end of season. I expect them to be in finals but they are not going to dislodge Melbourne Brisbane Geelong or Bulldogs sorry. As per Eagles look at next year.

Ladder is at the moment pretty accurate on power rankings. If you did not drop Richmond you certainly should not have dropped the Eagles out of 8 because of their performance last week. They were before that game every bit a contender. Melbourne Brisbane Geelong and Bulldogs all top 4. Don’t rate the Power much they should be 6 or 7 . Agreed on Freo then not Top 4 side yet.