Who's best: the premiers or the champions?

The A-League has got off to a bad start in this year’s AFC Champions League. 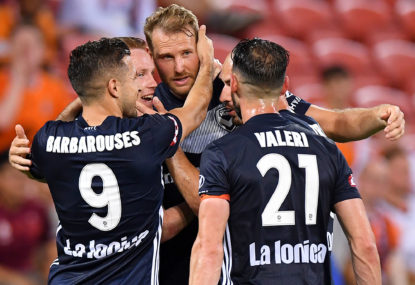 Who's best: the premiers or the champions?

To summarise – Arnie went from god to goose in 3 games.

On the subject of coaches, over the years readers here have pilloried Farina, Verbeek, Osieck, Postecoglou and now Arnold. It’s just possible it’s not the coaches who are the problem but the players (with the notable exception of Farina, who really couldn’t coach).

In this instance, Arnold took risks for the future by picking a team of promising talents and by attempting to resurrect Arzani’s career. If those gambles pay off in the future Arnie will have done us a favour. As it is we beat Argentina and held Spain for 80 minutes with a team full of A-Leaguers. That’s worth remembering.

And, at times, Atkinson, King, Arzani, Deng, Souttar, Wales, Metcalfe, Tilio and McGree all looked the goods. Glover too but goalies are harder to judge when they’re young – de Gea looked like a terrible mistake for ManU for his first season or two. Genreau, Watts, D’Agostino, Rowles and Baccus – not sure about any of them. The big Rich guy did a great impression of a tree.

Geez – I didn’t know that! Awful to know too.

It would have brought howls of indignation but Arnold really should have played a 2nd-string team against Spain. Our only hope against a team as skilful as that was to do a Mourinho, concede 80% possession, and run ourselves ragged defending. Which we did quite well but a ta huge cost – all we got out of the game was a few key players exhausted and 3 other key players out through calamitous yellow cards.

Having beaten Argentina, a better bet was to save ourselves for the Egypt game so we could play it at full bore with a full team. The first half last night was a mess, mostly down to the damage done in the Spain game. In attack, Deng was worse than useless going forward down the right and King was knackered down the left. In the middle, Metcalfe and Genreau were out on their feet and overrun. In attack, Tilio was out of position and wasted for the whole first half, and D’Agostino remains a prime suspect in the great pie heist. And those long throw-ins – both a throwback to a simpler time in Australian football and a throwback to the opposition.

All up, it was good experience for a bunch of young guys and gave Arnold plenty of insights. First priority should be to get Guillermo Amor over here to help with our underage teams. We need to learn how to do a Spanish press and how to play out of a Spanish press.

I think Plan B kicked in after about 20 minutes when Australia stopped the high press. No early goal came so they had to save energy and that meant sitting back for the remainder and hoping for a draw.

We did concede a lot of possession but better teams than ours have conceded more to the Spaniards over the years. They were relentless last night and Australia had zero space when they did have the ball.

On that point, I have no idea how the Spaniards maintain such high energy levels for so long in a game. I’d love to see the player stats.

Ninkovic might be getting old but he still runs further in a game than almost anyone else.

An Olympics tab – who would have thought!

Just out of interest…I had a look for a Roar live blog of the game when it was on last night and couldn’t find anything. I thought – bugger, nobody is interested and this is a magic performance! Turns out Mike was doing one but I couldn’t see it on the Roar football tab.

Was I looking in the wrong place?

Ditto for Mike’s article today – can’t see it anywhere unless I find an old Mike article and click through to Mike’s profile page.

Arzani has averaged 5 games a season over the last 3 years – I guess he’s a bit rusty. I certainly don’t remember his passing being a notable deficiency before.

What I loved about this win was that we could have scored more. Sure, we couldn’t hold the ball well enough but when we had it we attacked and looked good.

Atkinson, Deng, Souttar all looked very good. Glover is a keeper. Arzani’s passing was woeful but he can hold the ball well and that early slalom past several Argies was gold. King was good with the ball but a bit wobbly in defence. Tilio is a star – why Sydney FC let him go I will never understand.

The whole midfield were too easily pressed off the ball – I thought Watts settled things down when he came on.

And Duke – I’m not a big fan, but I can see why Arnie picked him. He does a great Matt Simon impersonation, which adds a hefty dollop of gung ho energy and aggression to a bunch of young guys who might otherwise be overawed.

As for the Argies, I can’t see any budding Messis or Riquelmes in this lot.

It was between Donnarumma and the ref for MOTM. I would have gone with the ref – he was superb.

For all the talk of England’s great leap forward technically, Italy is still some way ahead (as is Spain).

When England was crying out for a midfielder who could play a decent attacking pass or two, Southgate brought on Henderson, who would have fitted in nicely in an England team 40 years ago.

On the other hand, Phillips was exceptional.

Italy deserved that. For England Kane was hugely disappointing.

Italy: immobile one second, mobile the next.

Yes to all of that AG

City were excellent and are great to watch. Add Leckie and they’ll be phenomenal.

Sydney need to refresh their squad – getting too old to keep up with City and they are way too reliant on Ninkovic to control a game. They also must be regretting losing excellent youngsters like Tilio and Devlin in the last few years. Nieuwenhof’s injury was a big loss too.

Luna fouled Caceres and then fell over, so clearly a Beath penalty.

AG – Grant hasn’t been the same since he said he was looking for an overseas contract. Permanent audition nerves maybe.

One of the world’s best and she’s Australian. Fantastic athlete and getting better and better as a footballer.

If they pick Walter Zenga they’ll never live it down.