Take the grunt out of tennis 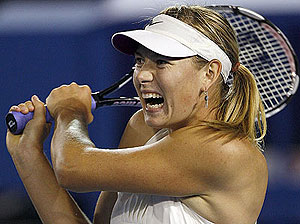 The actor Peter Ustinov, a wit and a tennis tragic, watched Monica Seles grunting her way to a victory at Wimbledon and with a sniffy hauteur said to a friend: ‘I’d hate to be be in the hotel room next door on her wedding night.’

Forget about wedding nights when grunting and groaning are presumably legitimate noise-making. Let’s just accept that watching someone like Seles play in the past, and now Rafael Nadal, Serena Williams and Maria Sharapova in the Australian Open, means subjecting a viewer to the sound pollution of grunts, groans, aaahs, ooohs, eeeaahhs-urrrrrrs, sometimes at a volume of up to 100 decibels a shot which is apparently the volume of sound that a small aircraft nearby makes taking off.

This sound pollution tactic is increasingly being adopted by players who, admittedly, put less into their shots and their racing around the courts than the star players. It’s being called ‘the counter-grunt.’ The journeyperson Russian player, Elena Dementrieva, for instance, lived up to her name by adopting a double-bang grunt, ‘oooaah- urrrring’, on every shot, whether a great effort was expended or not.

In the Rafael Nadal-Victor Troiski first-round match we had the phenomenon (first observed by Phil Derriman in the SMH in 2005) of two players grunting in a different key. In this match Nadal grunted in the key of middle C, a baritone sound. Troiski some notes higher, with a soprano pitch to his groans.

During the commentary of the Maria Sharapova-Lindsay Davenport match which saw a silent Davenport (and she’s the one who’s had a baby) overwhelmed by a grunting, stiff-backed Sharapova, Tracey Austin was asked whether she ever grunted during her illustrious career. ‘I occasionally made a little squeak,’ Austin admitted, ‘when a tremendous effort had to be made to make a return. I’m only 5 foot, 5 inches, after all.’

It was clear from the Ustinov-like sniffiness of her reply that she disapproved of Sharapova’s grunting and groaning.

There are two main reasons why sound pollution on the tennis court should be banned: first, it is used as a tactic to unsettle opponents: and second, it makes watching tennis played by grunters and groaners an unpleasant experience, which grates on the pleasure of watching a beautiful sport

The grunters and groaners deny that they are trying to unsettle opponents. But this is clearly at the heart of the tactic. The retired Wimbledon referee Alan Mills told reporters some years ago that coaches were training women players, in particular, to grunt as loud as they can.

Martina Navratilova, who despised the tactic, pointed out that tennis players rely on the sound of the ball coming off an opponent’s racket to a certain extent to give them clues about its velocity, direction and the spin on the shot. How convenient it is that the grunting denies a skillful player this basic information.

In the 1992 quarter-final at Wimbledon, Steffi Graf demanded that Monica Seles, grunting at a 93 decibel level, shut up. Seles eventually lost the match to Graf.

Then there is the unpleasant nature of the sound. For the two hours or so playing Sharapova, say, her opponent and viewers are subjected to an unceasing flow of unpleasant noise, rather like being forced to listen to a heavy metal radio station in a locked room with the sound distorted because the tuning is off-station.

Earlier this year John Newcombe called for grunting to be banned on the tennis court by the organisers of the major tournaments. This is a campaign that deserves the support of everyone who loves the spectacle and the beauty of tennis. The secrets of the bedroom should be kept to the bedroom.