An AFL team in Western Sydney? There's no market for it 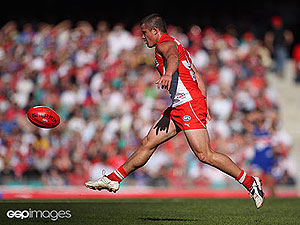 The reason the AFL wants to establish teams on the Gold Coast and in Western Sydney is because these areas have experienced rapid population growth in recent areas.

The Gold Coast has some connections to Australian Rules Football: the Brisbane Bears played their home matches there in the 90s and there are some teams from that area that play in the QAFL, such as Southport and Broadbeach.

Still, in the grand scheme of things, Queensland and the Gold Coast are very much rugby league dominated.

In the first match at Carrara stadium this season between North Melbourne and West Coast, the crowd was a dismal 6000.

If I were Andrew Demetriou, I would be a little concerned, even if fans were boycotting the match purely out of spite for North Melbourne.

It seems in some ways the AFL is going to ram the concept of Australian Rules Football down the Gold Coast’s throat. In essence, their attitude seems to be “We are going to force you to watch and enjoy AFL being played up there so we can make more profits.”

Western Sydney is even worse.

The only justification for the move into Western Sydney, apart from the reason outlined at the start, is Demetriou’s claim that 30 percent of people who watch the Swans on TV in Sydney are from the Western Suburbs. However, as a newspaper article pointed out at the start of the year, this 30 percent of bugger all.

The ramifications for setting up teams in these two areas could be significant.

I believe since there is not a massive interest in AFL in these two areas, the new sides will only be successful as a business if they perform consistently well on the field. Just ask the Sydney Swans on this pressure to perform well just to make ends meet, year-in, year-out.

Expanding the competition to eighteen teams will also make the game more competitive, cut throat and ruthless than it is now.

It will also put further pressure on struggling Melbourne teams.

At the moment, teams such as Melbourne and North Melbourne have a get out of jail free card if they are prepared to relocate. But both clubs are extremely reluctant to do so.

Once the Gold Coast and Western Sydney teams are set up, this option will disappear, which will leave struggling Melbourne teams in a precious position. If fans expect the AFL to bail their club out, my advice would be not to get your hopes up. Just ask any Fitzroy fans.

Ultimately I believe the best solution would be for the competition to remain at sixteen teams with some of the struggling Melbourne teams to relocate. But it appears that hell freezing over is more likely to happen than that scenario.