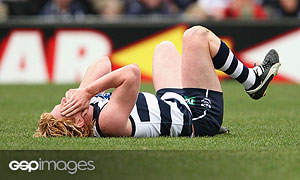 As the 2008 AFL season has panned out, Geelong, Hawthorn and the Western Bulldogs have assured themselves a spot in the top 3 for the September action.

In some ways the remaining games of the home and away season could be considered an inconvenience to these sides and so I beg the question: should they be resting their best players in preparation for September?

It’s surprising how rare it is for players to be rested. It happens sometimes when a player is carrying a niggling injury, but rarely do teams rest a fit player simply to eliminate the risk of them becoming injured.

The resting of top players is common in other sports. Top sides in soccer’s EPL will rest players if they have a champions league fixture on the same week, it also happens in the World cup and European championship if the side was assured of a place in the next stage.

The Australian cricket team also rests players during the long summer of cricket.

However in Australian Football, one of the most physically demanding games on the planet , “resting fit players” is treated as if it’s a dirty word.

History shows in AFL that whether we like it or not, injuries (or lack of them) play a major part in deciding the premiership. Sydney’s seasons in 2005 and 2006 were attributed in part to their fortunate run with injuries. Conversely injuries badly hindered Brisbane in 2004 and West Coast in 2007. In the latter example Daniel Kerr ruptured his finger in a nothing match against Richmond and West Coast were criticised for not resting Chris Judd earlier in the season.

Of course injuries are often a lot to do with luck, but also players in the top teams may feel the wrath of players from lesser clubs acting out their “jealous husband” routine. Carlton v Geelong in the final round of the 2000 season is a classic example.

Carlton was assured of second spot and Geelong was out of finals contention. Although Carlton easily won the match they suffered 3 significant injuries most notably Steven Silvani, who was knocked unconscious after being shirt fronted by Darren Milburn.

The Geelong v Fremantle game this year is another good example of lesser teams trying to stop a better side. Fremantle knew they couldn’t win so they attempted to rough Geelong up. It didn’t work, but the Cats suffered injuries in Gary Ablett (yes I know that could have happened in any game) and Cameron Ling who has his faced smashed in by Dean Solomon. Whilst talking about Geelong, last year All Australian Centre half back Mathew Egan ruptured his foot against Brisbane in the final round of the regular season, a match that had no bearing on finals

Fans may not like the concept and I concede the examples I’ve used are based on hindsight and luck.

But surely fans would be gutted if injuries in dead rubber games ultimately cost their side a tilt at the premiership. Put pride and toughness aside, and think big picture by eliminating risks.