Will AFL and NRL take a backseat to World Cup? 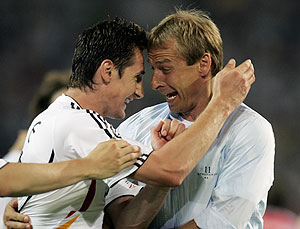 Germany coach Jurgen Klinsmann, right, celebrates with forward Miroslav Klose at the end of the World Cup, Group A soccer match between Germany and Poland, at the Dortmund stadium, Germany, Wednesday, June 14, 2006. Germany won 1-0. The other teams in Group A are Ecuador and Costa Rica. AP Photo/Murad Sezer

The “official” launch of Australia’s bid for the 2018 or 2022 Football World Cup occurred last Sunday. In being considered for hosts, a range of logistical factors will be taken into consideration.

If Australia was successful in its bid, a major logistical challenge would be how the AFL and NRL seasons could be altered to accommodate the World Cup.

The World Cup would have to be held during in the off season of the northern hemisphere club competitions, so June or July. I really can’t see Australia being able to change this. Nor would they would want to rock the boat, anyway.

Therefore, the World Cup would occur for one month right in the middle of the NRL and AFL season. This eliminates the option the AFL used in the year 2000 when they moved the season forward by three weeks to accommodate for the Olympics.

So that leaves two remaining options.

The first is that the competitions play as normal, concurrently with the World Cup. I really can’t see that happening.

I don’t believe there would be enough stadiums to go around, and the television and media coverage of all three competitions would be adversely affected.

So the only other option I can see is to simply put the NRL and AFL on hiatus during the tournament. It seems a reasonable solution, after all, it would be an incredible opportunity to have Australia host the World Cup and probably a once in a lifetime one.

So perhaps the AFL and NRL would be willing to do this.

However, this option throws up some conundrums.

For instance, will the grand finals still be played in September? If they are, both competitionss would have to start a month early as well as taking a break for a month.

Alternatively, the grand finals could be played in October. Plausible, but would this upset some traditionalists?

It may not be an issue, but I think the FFA needs to take this into consideration in its bid.

IF FIFA can see the potential for conflict between the codes, then it could jeopardise Australia’s chances of hosting the greatest show on earth.