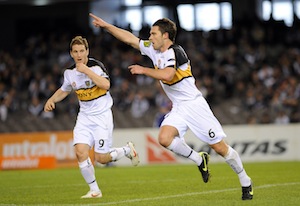 Wellington Phoenix's Tim Brown celebrates after scoring against Melbourne Victory during their round 6 match, played at the Ethihad stadium in Melbourne, Sunday, Sept 13, 2009. Phoenix drew the match with Victory 1-1 after full time.(AAP Image/Joe Castro)

After almost 20,000 fans packed out Christchurch’s AMI Stadium for last weekend’s Wellington-Adelaide clash, many pundits have been asking whether the South Island’s largest city should be a site for future A-League expansion.

Last Saturday’s brilliant crowd turn-out definitely suggests there is an appetite for football in Christchurch, and with a population of just under 400,000 people, it would be understandable for the FFA to have some interest in tapping into the market.

Indeed, the attendance figure of 19,258 at AMI Stadium, ignoring the fanatical Melbourne crowds, is the second-best in this A-League season to date, only bettered by Brisbane’s Round 1 M1-Derby number of 19,902.

I dare say, the FFA have taken notice. The figure certainly stands out over the A-League expansion hopefuls from Canberra, who only managed a pair of 5,000-odd crowds for two fixtures this season.

But, of course, the FFA will be reluctant to make any significant moves into ‘the Land of the Long White Cloud’ due to the AFC’s stance on Wellington’s participation in the Australian top flight.

And that is the lingering issue which will thwart anything being put in stone… for now at least. After all, there is hope for a resolution on this topic in the future.

In the meantime, the FFA and the Wellington Phoenix, for the good of New Zealand football, should persist with an annual pilgrimage down to Christchurch.

That would be the ideal way to test the waters in Christchurch and ascertain whether or not a club could actually be sustainable in rugby-mad Canterbury anyway.

After all, a Christchurch franchise would need their own version of Nix owner Terry Serepisos (who has been so crucial to Wellington’s success) to start up a bid, and no one in their right mind would do so without more experimentation and trial matches.

Anyway, I’ve been lucky enough to spend a fair bit of time in New Zealand’s South Island in the past and this week I got in touch with a few old folk from Christchurch who informed me last Saturday was quite the occasion around town.

Indeed, there were a number of mitigating circumstances which built up the occasion, especially following New Zealand’s qualification for their second ever World Cup and first in 28 years, which really has bolstered football’s profile across ‘the ditch’, at least for the next few months.

As well, Wellington are on the verge of claiming their first ever A-League finals berth and with an army of colourful supporters travelling down from the North Island, there was every reason to join the party.

And, of course, the novelty of the opportunity to see an A-League game, I’m informed, certainly had an effect too.

Nevertheless, Christchurch is a town with a passion for sport and their local rugby union club, the Crusaders, are almost the Manchester United of Super 14.

Whilst in Christchurch, I distinctly remember my surprise when walking the streets at the amount of Crusaders paraphernalia being sported like some kind of fashion statement. And no, it wasn’t matchday, it was an everyday occurrence!

There’s no doubt the South Island city offers a fresh market and with that opportunities.

But those opportunities aren’t just limited to the A-League, but also the Phoenix who can spread their brand, as well as NZF, who’d love another pathway for young Kiwi footballers.

Indeed, there’s plenty of vested interests in the Christchurch market, but we shouldn’t get too carried away and the sustainability of such a project needs more experimentation.

And, of course, the AFC’s stance on Oceania confederation clubs competing in an Asian league won’t go away anytime soon.

But, despite the AFC’s stance, A-League matches can still be played in New Zealand, so in the meantime it makes plenty of sense for annual games in Christchurch.

Not only will an annual Christchurch match provide a good measure for future expansion, but going on Saturday’s showing, it’ll make for quite the occasion and occasions are just what the A-League needs.