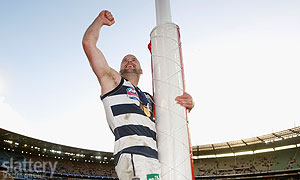 Norm Smith Medallist, Paul Chapman of Geelong, celebrates after winning the 2009 Toyota AFL Grand Final between the St Kilda Saints and the Geelong Cats at the MCG. The Slattery Media Group

As we draw closer to the start of season 2010, we look at the big questions being asked in the AFL, including the most important of them all.

Does Geelong need to win this year’s premiership to be rated with the best sides of all time?

They do. Three in four years will put the Cats right up there with the very best. While it is difficult to compare eras – some regard it as impossible – two premierships surely puts you in the ‘good’ category. To be ‘great’, the Cats need to climb the mountain again this year. Many of their stars show no sign of slowing down, and the club’s envious depth is no secret. A third flag will confirm their status as an all-time super team.

There is no definite data to suggest so, but there is no doubt coaches are more defensively minded. It’s a mantra in basketball to start from the defence to build attack. Don’t expect to see too many big bags in games involving Adelaide and Sydney. But, with the likes of Fevola, Brown, Franklin and Riewoldt running around, hopefully there are not too many low-scoring scraps this season.

Will the bench debate and player welfare resurface?

No doubt. But that doesn’t mean more numbers should be added to the bench. Four is sufficient, and it should stay that way. Coaches have often criticised the amount available on the bench after a loss – especially Mick Malthouse, who believes a team who loses a player to injury early in the match is severely disadvantaged. That may be so, but life isn’t always perfect. Back in 1993, there was just one interchange player. The game is faster today and, as a result, the numbers on the bench have been increased. But if it continues, there may as well be no selection on a Thursday night – just put the whole list out on the ground to give coaches the comfort that they have enough in reserve.

A good player versus a good clubman?

Luke Ball was, basically, made to leave to Saints after receiving limited game-time throughout the season and in the Grand Final. St.Kilda then recruited Andrew Lovett to give the side some added speed in the midfield. Lovett is now gone, pending appeal, and is facing charges and a court date while Ball, a player with no prior disciplinary issues, will be looking to help Collingwood have a successful year. Ball, in his own right, is a fine player. But the Saints thought Lovett would add more to their set-up when they recruited him from Essendon and it has backfired. Do clubs simply consider ability? Or is there more to it? How important is ‘character’ when you are aspiring to win the premiership?

Finally, and most importantly: Who will win the premiership?

No one knows the answer to this question at this stage of the season. But we all like to have a guess. St.Kilda and the Dogs have two flags between them in their respective histories, so no one, I’m sure, would begrudge success for that pairing when it arrives. But, Geelong, in my opinion, remains the best of the best. The Cats have the best player in the competition, Gary Ablett Jr, and another five who would comfortably rate in the league’s top-20 players – Paul Chapman, Matthew Scarlett, Joel Selwood, Jimmy Bartel and Corey Enright. It is a star-studded team.