Roger Federer is merely in transition 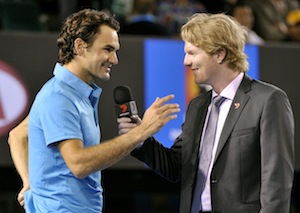 Following his semi-final defeat at the hands of Novak Djokovic, critics and fans alike have begun to wonder if the end of the Roger Federer ‘Federa’ is coming to an end. Of course, this is not the first time such a prediction has been made by those brave enough to write him off.

Following defeats to Djokovic (again at the Australian semis) and Nadal (Roland Garros & Wimbledon) in 2008 many thought Roger Federer was a goner.

He had suffered a heavy defeat at the hands of Nadal as he tried to win Roland Garros for the first time in his career. But worse yet, his run of five consecutive Wimbledon titles had come to an end, following a 4 hour 48 minute epic, widely thought of as the greatest match of all time.

The following year, Federer once again lost to Nadal in five sets, this time in Melbourne. The tears that ensued seemed to be symbolic to many critics in the media. Federer was done. He would not win another Grandslam.

The response was fairytale-like. After three consecutive final losses at Roland Garros, Federer battled through some tough earlier rounds to the final, where he dismantled Robin Soderling, attaining the career Grandslam.

At that stage, it was hard to find an expert who didn’t consider Federer to be the greatest male singles player of all time. He assured any doubters with a sixth victory in Wimbledon and a fifteenth Grandslam title.

How Federer came back to dominance cannot be fully known. Partly perhaps, because his game was more complete, although that is a hard thing to imagine.

He added the drop-shot to his arsenal, proving a killer blow on the clay. It was his willingness to make necessary changes in his game that saw him rise to power once again. We saw hints of it during the American hard-court swing, but he was still not consistent enough with his strokes.

As his new game became second nature, everyone witnessed the devastating effects.

More recently, challenged with quarter-final losses at Roland Garros and Wimbledon, again Federer faced criticism and predictions of an “imminent fall from the top”.

In New York, at the U.S. Open, having hired new coach Paul Annacone, we saw a different Federer who had been beaten by Thomas Berdych in straight sets on the All-England Club’s lawns.

An attacking, aggressive style which overcame all of his opponents until he reached the semi-finals with two match points. Federer lost, but he was showing signs of great improvement. He was in transition.

Following the U.S. Open, there was no doubt who was the dominant player on tour. Not Rafael Nadal, who had just become the eighth man to complete the Career Grandslam, nor Djokovic, who had played some of his best tennis at Flushing Meadows.

Federer reached the final of all but one of the last five tournaments of the year, winning three titles, including a victory against Nadal at The O2. But despite this great success, Federer found little in the way of challenge, his improved “all-out attack” mentality had proved good enough to overcome nearly every opponent.

A challenge did not arise until the Australian Open, this year. In the second round, he met Gilles Simon, the Frenchman on his return from injury, and whom Federer had failed to beat in their two previous encounters.

With a comfortable two sets to love lead, Federer looked as if he was about to beat Simon for the first time with relative ease. But Simon stepped it up as Federer lulled in the third set, his speed and ability to absorb Federer’s power proved too much to handle, and took the next two sets, with Federer looking in deep trouble. He managed to pick up his game at the right time and take the fifth set.

The real challenge however, arrived in the semi-finals, with Novak Djokovic at the opposite side of the net. For the first time in years, the Serb’s serve was a weapon to be fearful of, and he was coming into this match hot.

He also had the knowledge of having beaten Federer at the very same stage three years earlier. Djokovic was a daunting opponent. He took the match in three close sets, blowing Federer away with a newfound agression.

What proved vital in Djokovic’s win was Federer’s obstinate view on his new game. This was mainly adopted to take on the likes of Nadal, a defensive, almost passive player, not the new and improved Djokovic. His aggression from the back of the court as well as incredible defense was to be admired.

Federer was not quite comfortable enough with his new style to implement the necessary changes. But he is getting there; he is in transition. And when he does get there, he will be a very difficult force to contend with.

For the first time in over six years, Roger Federer does not hold an active Grandslam title.

Immediately after his exit from Melbourne, critics once again predicted the demise of Federer, with headlines like “Federer will never win a Major again” reappearing, and a strange feeling of déja vu along with them.

A gripping tale: Why Federer vs Nadal at Wimbledon 2008 was the greatest final ever