Saving Private Rondo: How the NBA left Rajon Rondo behind

Since LeBron James entered his prime in the 2008-09 season, he has played 21 playoff series.

In those series Kevin Durant, Russell Westbrook, James Harden, MVP Derrick Rose, Paul George (three times) and many others have come up against King James and been readily dispatched.

Only two players have ever outplayed prime LeBron in the playoffs. The first, and most famous, is Dirk Nowitzki, one of the 25 greatest basketball players of all time who caught fire in the 2011 Finals.

The second is Rajon Rondo.

In the 2010 Eastern Conference second round Rondo put up 21 points, 12 assists and 6 rebounds with 54 per cent shooting on LeBron’s Cavs. When his Celtics trailed 2-1, Rondo played the game of his life in Game 4, forever endearing himself to New England with a remarkable 29-13-18 in the victory that changed the series.

After a hot start, over the final three games of the series James averaged 21 points on 34 per cent shooting with over six turnovers a game. The Celtics won in six and it was four years before LeBron wore another Cleveland jersey. While LeBron and maniacal egotism played a large part in The Decision, Rajon Rondo was its secret instigator.

He outplayed the most talented basketball player since Michael Jordan and literally sent him south.

This Rondo, Playoff Rondo, has become something of a mythical creature. Who is Rajon Rondo? Is he the aggressive superstar who averages 14.4 points, 9.1 assists, 5.9 rebounds and 13.2 shots in 92 Boston playoff games?

Is he the supernova who somewhat heroically drops a 44-10-8 in Game 2 of the 2012 Eastern Conference Finals on LeBron, Dwayne Wade and the Heat? Or is he the player who sleepwalks through regular season games against Charlotte?

The former is one of the most dynamic talents in NBA history. The latter is just a guy.

With Rondo on the court that rating plummets to 25th. It’s remarkable to think that a player who was justifiably considered one of the eight to ten best basketball players in the world just three years ago may not even be a ‘good’ NBA player anymore.

How did this happen? In essence, the NBA changed and left Rondo behind. In 2015 the NBA is about shooting threes and getting to the rim. The top four seeds in the league this season (Golden State, Houston, Atlanta and Cleveland) all rank in the top seven for three point attempts.

Golden State and the Clippers (the two best teams in the league according to point differential) lead the league in field goal percentage around the rim.

Shooting threes (the most valuable shot) and layups (the highest percentage shot) is where the NBA is at and will continue to head for the foreseeable future.

That’s a problem for Rajon Rondo.

Rondo has never been able to shoot threes, with a 26.3 per cent mark from downtown for his career that makes Dion Waiters smile. Rondo is actually highly efficient shooting at the rim (at 60.7 per cent he shoots at a better mark than James Harden) but he’s afraid to go there these days.

Which brings us to the biggest problem: Rajon Rondo cannot shoot free throws. He has never topped 64.5 per cent for a season from the line (his career average is 60.9 per cent) and this season he shot a ghastly 39.7per cent from the stripe.

That’s more than ten percentage points worse than Josh Smith. He’s seemingly adjusted to this ineptitude, at the expense of his offence, by never getting fouled. Rondo shot 1.1 free throws per game this year, less than half as many as Luc Mbah a Moute.

So, what exactly is Rajon Rondo? He can’t shoot, which kills his team’s spacing. He can’t collapse the defence because he’s petrified of getting fouled. When engaged he’s a decent defender, although Boston was worse each of the past five years on defence with Rondo on the court (Dallas admittedly improved with Rondo on the defensive end).

He’s an above average rebounder for a guard, although his rebounding prowess has always been overrated (for his career he averages 4.7 boards per game – this year Steph Curry averaged 4.3).

His best skill will always be his passing, which still ranks somewhere between elite and transcendent. But the tragedy of 2015 Rondo is that he kills his team’s spacing so much with his inability to shoot to the point where a lot of the guys he could be passing to are well covered.

Rajon Rondo is one of my favourite basketball players of all time. His passing gene, vision, spatial awareness and timing are extra-terrestrial, echoing Steve Nash, Jason Kidd and Magic Johnson.

Rondo’s 44-point explosion against Miami is one of the most remarkable basketball performances I’ve ever seen, the perfect juxtaposition of his supernatural skill and maniacal, defiant competitiveness.

He was a warrior for Boston, someone who always rose to the occasion and was never afraid. While nobody remembers it, Rondo was the only Celtic who truly showed up in Game Seven of the 2010 Finals against the Lakers, playing 45 minutes and delivering a 14-10-8 while Pierce and Allen combined to miss 21 of their 29 shots.

He was the starting point guard for an NBA champion and he led another team to the Finals as its best player. It’s hard to call his career a failure. And yet, at 29-years-old when he should be in the midst of his prime, we’re already talking about Rajon Rondo in the past tense.

I still think that Rajon Rondo might be one of the 30 most talented basketball players on the planet. But in this era of James Harden Moreyball, it’s not clear whether Rondo is even one of the 100 best players in the NBA anymore. His time with the Mavericks (likely finished after a dubious and convenient ‘back injury’ has him out indefinitely) has been a downbeat disaster.

He’s not a max player, and his pending free agency should terrify Lakers and Knicks fans.

The NBA is in the best place it’s been since Michael Jordan retired. The talent stocks are deeper than ever and the product is majestic. Threes and dunks are eminently more fun to watch than post-ups and contested mid-range fadeaways.

We’re in the Steph and Klay age now, and that’s a good thing. But inevitably the winds of revolution leave casualties.

So next time you’re watching Curry drain threes, Atlanta create layups through their pristine spacing or Harden drive to the hoop with men positioned in the corners, spare a thought for Rajon Rondo; a champion, a warrior, and seemingly a soldier that got left behind.

Celtic bodies whir around on defence, arms make angles disappear, and everyone is where they’re supposed to be. 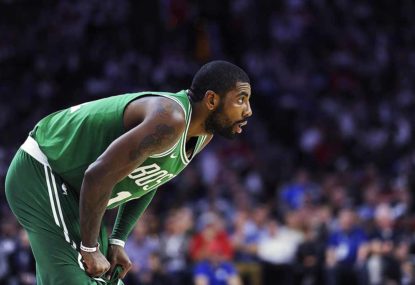 There are some exciting match-ups in the east. Here are my predictions for the first round of the NBA play-offs.

Danny Ainge. The General Manager who ripped off the Brooklyn Nets to get Jayson Tatum and Jaylen Brown for some old super stars. 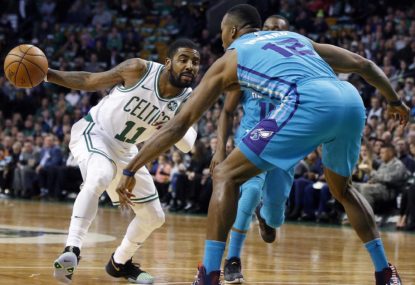