After two Friday games, we’re back for another Thursday Forecast – tonight it’s the Brisbane Broncos vs Canberra Raiders.

Yes, that’s right – the end of days is near, because the Raiders are once again on free-to-air TV.

In fact, it’s the Raiders third free-to-air game in row, after they got a Sunday afternoon victory against the Canterbury Bulldogs and escaped a spirited Manly Sea Eagles fightback last Friday night.

Can they make it three free-to-air wins in a row?

Recent form
The Raiders enter this contest in much better form that the Broncos. One month ago that would have seemed impossible.

The home side enter this contest after three consecutive losses, something they haven’t done since mid-way through the 2014 season. Coach Wayne Bennett, who as we all know doesn’t like speaking to the media, has commented at length on the unfair effect of the representative period on his team.

Whether or not Bennett is correct about the fairness of the draw is largely irrelevant for our purposes, but the effect on the field have been huge.

Against both the Tigers in Round 12 and the Warriors last week, the team was limp in attack and relative push-overs in defence. For the Tigers, Bennett was forced to draw upon three reserve forwards with a combined five appearances, while against the Warriors Sam Thaiday and Corey Parker were asked to back up on three day’s rest.

The team is back to full strength so it will be fascinating to see if they show more gusto or if the malaise runs deeper.

Canberra meanwhile, have a three-game winning streak after they defeated a lacklustre Warriors team in New Plymouth in Round 11 before hanging on for solid wins at home to the Bulldogs and Sea Eagles. However, while the team now sits in (effectively) fifth position on the ladder, there was much to dislike about the performance against the Sea Eagles as they almost have the game away.

Still, even with that frustrating fadeout against the Eagles, the Raiders will bring plenty of confidence to their first game at Suncorp since 2012.

The Broncos have made a number of changes, with their remaining Origin representatives Corey Oates and Matt Gillett to re-join the team after they skipped the trip to Auckland.

Josh McGuire has been returned to the front row after the experiment of playing at dummy half.

While McGuire had some experience in the role it was not successful and Travis Waddell, a former under-20s premiership winner with the Raiders, will take his place. Meanwhile, Adam Blair has lost his starting spot to Sam Thaiday and Joe Ofahengaue has been omitted altogether.

There has also been a late change with Jack Reed ruled out due to a shoulder injury. Jordan Kahu will shift to the left centre, with Greg Eden to come in on the right wing.

For the Raiders, there is another re-shuffle of the forward pack, with Shannon Boyd serving a one-week suspension for a silly, late shoulder-charge on Jake Trbojevic. Replacing Boyd will be Country prop Paul Vaughan, who joins Junior Paulo after he made a big impression during his first game in green – Jamie Buhrer is still waiting for his insides to settle after attempting to tackle Paulo.

Luke Bateman retains his starting position at lock, with Shaun Fensom given a second week off to recover fully from a hip injury – an explanation I will take at face value.

Meanwhile, Josh Papalii, who was excellent off the bench backing up from Origin two days earlier, will resume his starting role on the left edge, with halfback assassin Sia Soliola returning to the bench.

The other change for the Raiders is at fullback, with former Cowboys under-20s player Zac Santo named to replace Jack Wighton who has been suspended for a vicious high tackle making fleeting contact with an official.

Wighton’s suspension is a shame after a much-improved game against the Sea Eagles followed a disastrous outing against the Bulldogs.

What to watch for
As we’ve noted, the Broncos have lost three games in a row (though one was a brutal away trip to North Queensland) and looked more than a little lethargic in the last two appearances.

Whether or not you think Brisbane are unfairly disadvantaged by the Origin period or subscribe to the ‘Wayne should just get over it’ school of thought, it is clear they are struggling to adapt to the omissions and heavy workloads.

Those effects were as pronounced as they were damaging on Saturday. In particular, the forwards struggled badly both in attack and defence, making only 897 metres on the ground, while allowing the Warriors to make 1343. Those are awful numbers, however they fail to demonstrate just how poorly the Broncos played.

These maps show the location on the field where and how the set ended. For our purposes, a yardage set is one which begins from either a kick off or after an opposition completed set. So, put another way, these maps do not include sets that begin with penalties or from opposition errors.

Yardage sets are the absolute bread and butter of a football team. While it is all well and good to capitalise on opposition errors or penalties you receive, it is rare a team will win a match without at least drawing even in the field position battle that is reflected in yardage plays.

The first map we will look at is the Broncos map from the game against the Warriors. Brisbane are running left to right and they did not enjoy much success getting out of their own end. On only four occasions were they able to get the ball over halfway way without assistance from a penalty or a Warriors error. 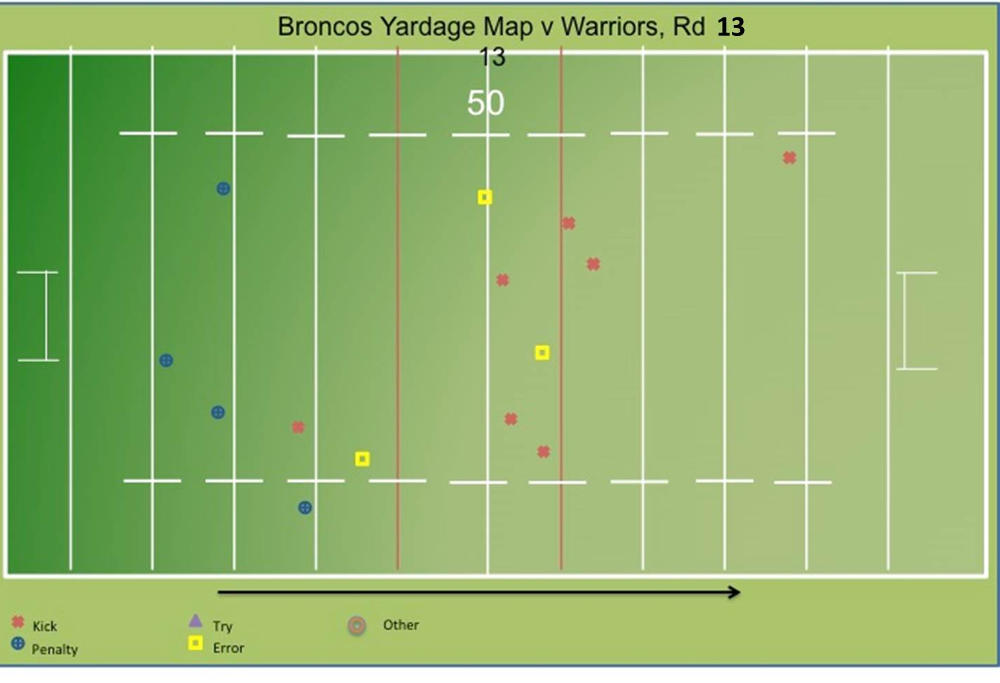 Contrast this with a map from their game earlier in the season against the Knights (note that on this occasion the team is running right to left). Now while Newcastle are not the ideal team to compare, given their current struggles, the difference is apparent, with 16 yardage sets resulting in a final play over half way and ten inside the 40-metre line. 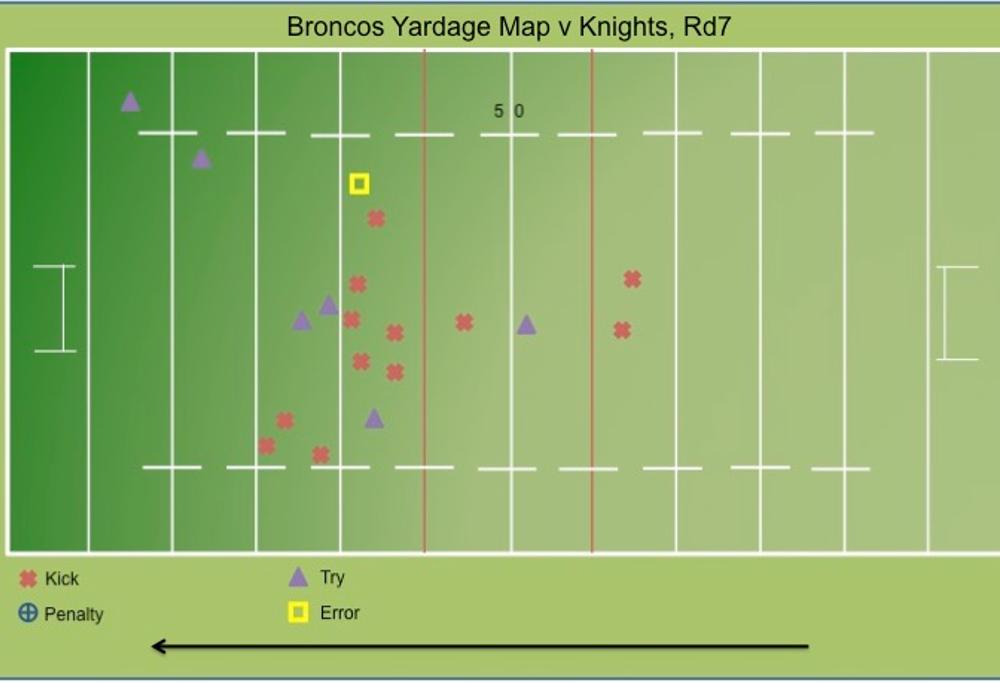 The difference is marked and reflects a substantial lack of go-forward, which is essential for creating scoring opportunities.

However, the truly concerning thing for Brisbane wasn’t the attack but rather the atrocious performance in defence. This next image demonstrates the Warriors, again running right to left, plundering the Broncos for huge gains time and time again. 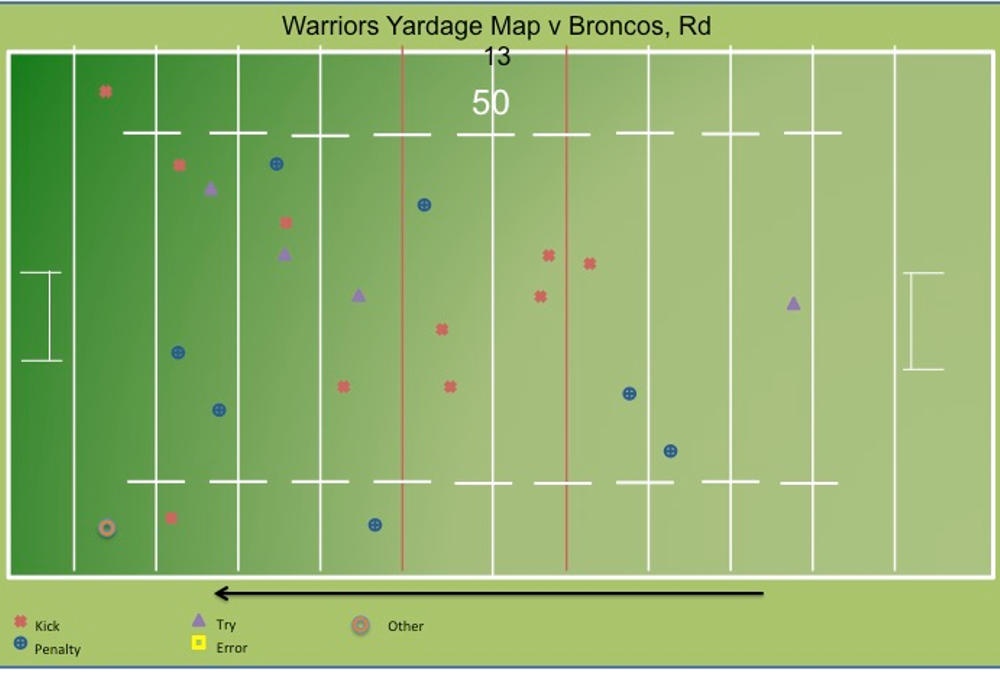 The Warriors were able to get into Broncos territory on 16 occasions, with ten of those reaching inside the 30-metre line. This is a horrible performance from Brisbane and whether it was Origin-related lethargy or otherwise, in the NRL you simply cannot give any team this much field position and hope to survive.

Canberra thrived, nay dominated, against Manly for considerable stretches, only to fall into bad habits once the game was effectively won, even to the point of actually giving the Eagles a sniff of an improbable comeback.

With a 24-point lead with 25 minutes remaining and a second stint from giant starting props Shannon Boyd and Junior Paulo still to come, the Raiders should have racked up a big score, similar to that which they put on the Wests Tigers in Round 9.

Instead, the team made errors on four of their final eight possessions and made bad choices with the ball, showing poor personal discipline. The following collection of images shows four instances of Canberra failing at the sorts of little things that separate the good teams from the great teams. 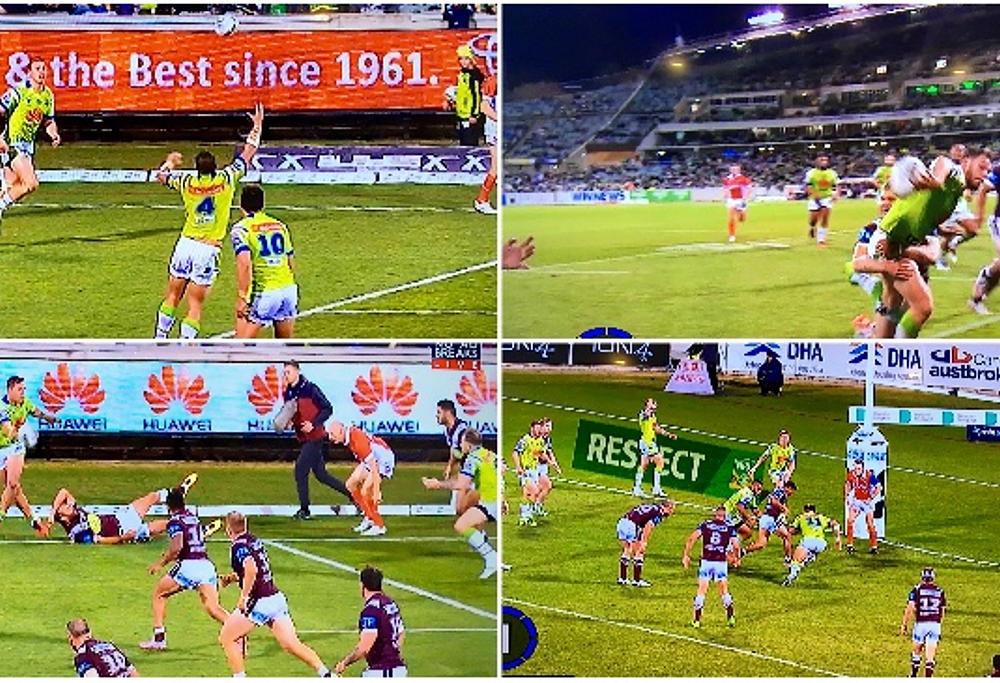 The image in the top left shows a careless pass from dummy half that sailed over Joey Leilua’s head, ruining any chance to apply pressure.

The image in the top right shows second rower Elliott Whitehead attempting an improbable flick pass to Jordan Rapana, who was well covered.

In the bottom left we see Rapana attempting hos own Hail Mary pass back inside to Blake Austin just moments after collecting an errant Manly pass near his own line. While a runaway try would have sealed the game for the Raiders, taking the tackle and playing out the set of six would have been just as effective.

Finally, in the bottom right we see several Canberra players showing a distinct lack of urgency as Apisai Koroisau chases his own grubber kick. This is a still shot, so everyone is motionless, but body language shows how uninterested most of players in the vicinity are.

The Raiders have the capability to beat anyone. They have a colossal and skilful forward pack with more impact off the bench than perhaps any team in the competition, talented players through the spine, and some big powerful outside backs.

But until they demonstrate that the can maintain focus for 80 minutes they won’t be a threat to the top-tier sides.

First try scorer – Corey Oates
Regular readers will know I have previously pledged that any time Corey Oates is playing wing I will be tipping him for first try.

However, last week I foolishly made the same pledge about Jordan Rapana, who is currently equal second on the try-scoring list.

I’m sticking with Oates, as the home-town player has the better first try record this season, with three so far.

Prediction – Broncos in a close one
Brisbane are in a slump, after struggling to find their rhythm against the Tigers and being blown off the park by the Warriors.

But even with the awful form line, it’s still hard to tip against them at home, particularly against a team as inconsistent as Canberra.

Shoe-in of the week
Anthony Milford is very, very good at rugby league. He also used to be a Raider.

Canberra fans are now doubt looking forward to someone on the broadcast team inevitably talking about how the team “let him go” two years ago.

Brisbane captain Alex Glenn will be sidelined for up to two months with a knee injury after he fell victim to a cannonball tackle in the Broncos’ win over Canterbury. Bulldogs centre Reimis Smith was on Sunday hit with a grade-one dangerous contact charge over the incident, leaving him facing a one-game ban. But that […]