Rejuvenated Phoenix need a nine to stitch up attacking woes

Ernie Merrick’s touchline demeanour is typically mild, but when it has come to speaking publicly about his side this season he has been unexpectedly buoyant.

Every coach feels optimistic going into a new A-League season but Merrick’s enthusiasm felt particularly genuine after an off-season characterised by fresh rejuvenation in Wellington.

The two biggest new faces arrived from the Victory. Kosta Barbarouses and Guilherme Finkler were exciting upgrades in attack. The former, in particular, was a high-profile coup given he had been at the top of his game in Melbourne and was lured home by the promise of the Phoenix project. Unsurprisingly, Merrick has chosen to build his side around the two new attackers.

Merrick’s footballing ideal
Merrick is not shy about his footballing ideals. “I like to have a key decision maker up front supported by two very quick strikers,” he revealed in a fascinating interview with The Guardian‘s Richard Parkin.

“I like to give them a lot of freedom, and not turn them into defenders.”

As Parkin extrapolates, this philosophy was best espoused by Merrick’s great Melbourne Victory side of 2005-06, featuring the twin terrors of Danny Allsopp and Archie Thompson upfront supported by the wonderfully creative Fred. Fred was one of the A-League’s first genuinely great ‘unknown marquees’ – an import that didn’t come with great pedigree but proved his worth on the pitch.

Fred was your typical traditional no.10 – enjoying great freedom in attack to find space to play clever passes into the front third.

Finkler is cut from the same cloth (and not just because he is Brazilian, either). Not exceptionally fast nor positionally versatile, Finkler is a cut-and-dried no.10 – always moving into pockets of space, getting between the lines, and linking the play to wingers and strikers. At the Victory, he thrived first playing as one of the dual 10s in Ange Postecoglou’s 4-2-2-2, before becoming the main man behind Besart Berisha in Kevin Muscat’s first full season.

While his form dipped last season, it is not hard to see why Merrick was so keen to sign him as his ‘key decision-maker’.

McGlinchey and Bonevacia
Interestingly, the arrival of Finkler suggested role changes for two players who were once the stars of the show in New Zealand. Michael McGlinchey and Roly Bonevacia arrived together in the 2014-15 season. Merrick changed tactical systems throughout the season but always with the intent of getting the best out of his two talented midfielders.

McGlinchey was initially used as a false nine, dropping deep from an advanced starting position into midfield, dragging away central defenders to create space for other attackers, such as Fijian flyer Roy Krishna, who blossomed in the system.

So did Bonevacia, who was a revelation driving forward into goalscoring positions despite originally signing as a defender.

Later, Merrick started using McGlinchey and Bonevacia the other way round – so the latter became a #10, freeing up McGlinchey to operate from deeper zones where he could control the tempo of the game. 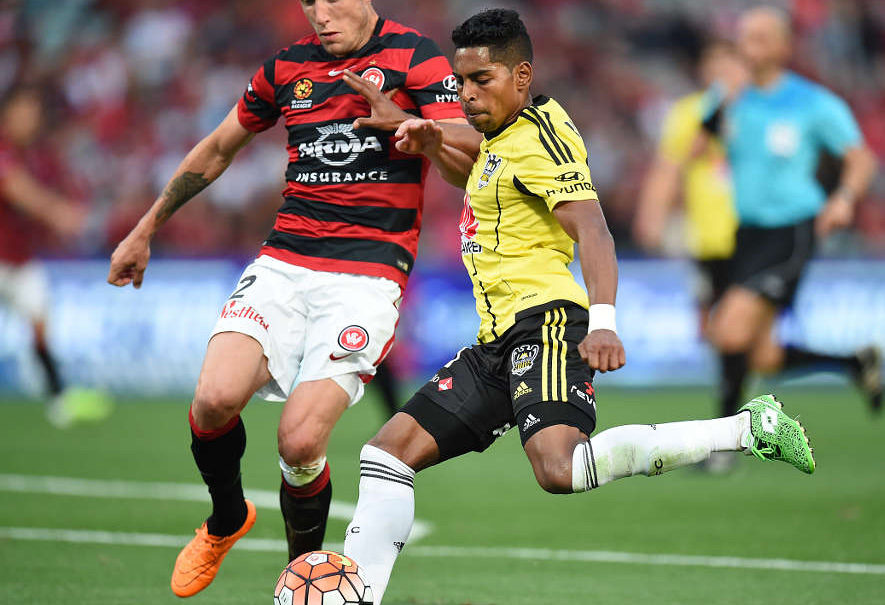 Then, Merrick moved McGlinchey into a left-wing position, but again with the remit to drift inside into #10 positions. In some ways, the actual zones in which McGlinchey operated in never changed – just his starting position.

Bonevacia, too, was encouraged to move across the pitch to find space, with Krishna charged with making runs in behind. This created space between the lines as opposition back fours dropped deeper, wary of Krishna’s pace, and helped create that necessary target for through balls.

Against teams that defended man-to-man, they could cause problems by creating overloads in different zones. However, the biggest issue was that the system defaulted to excessive narrowness, which even attack-minded full-backs could not compensate for. Coupled with off-field licence issues and player troubles, it resulted in a difficult ninth-placed finish.

Wellington’s identity
Results may not have been ideal, but you could not say Wellington had not been built in Merrick’s image. This season has seen yet more tactical intrigue, with the addition of Finkler and Barbarouses to the puzzle.

Wellington’s starting formation has been a 4-4-2 diamond. True to his word, Merrick has utilised Barbarouses and Krishna together as strikers, albeit with unusually wide starting positions. From there, though, they have freedom to move inside, making darting diagonal runs into the channel between opposition full-back and centre-backs.

With Finkler as a #10 rather than a false nine, there is no-one dragging away central defenders, so Krishna and Barbarouses need to position themselves and time their runs to be able to occupy an entire back four.

Helping them that out with that task has been McGlinchey and Bonevacia, playing from the two ‘shuttler’ positions of the midfield diamond. When the ball enters the final third, particularly when Krishna or Barbarouses receive on the outside of the full-back and are looking to cross into the penalty box, both midfielders have been encouraged to dart forward into goalscoring positions. McGlinchey, for example, scored with one such run against Sydney FC, but was correctly ruled offside. Bonevacia aside, however, this is not a natural attribute of McGlinchey or Finkler, which helps explain Wellington’s poor goal return so far this season. They are yet to score in open play after four games.

Wellington’s midfield is also fluid when building up from the back. Bonevacia drops back into the same receiving line as Vince Lia, the holding midfielder at the base of the diamond, with McGlinchey making the opposite, asymmetrical movement, pushing higher into the same receiving line as Finkler. That creates a box in the centre of the pitch, making the formation appear a 4-2-2-2. To create width otherwise absent, full-backs Jacob Tratt and Tom Doyle are encouraged to push forward in support.

Narrowness, though, is the biggest issue of the diamond defensively.

The most glaring issue of the 6-1 mauling in Melbourne was how much freedom Victory left-back Daniel Georgievski had to get forward. With Merrick encouraging his front three to stay high up the pitch – “I want him to cheat a little bit and not track too far back into our back third… I’m trying to get him to work less in defence” says the coach – opposition full-backs have no direct opponent.

Georgievski won the first penalty on Monday night; Zullo crossed for Sydney FC’s late winner and Josh Risdon provided the assist for Perth’s second goal. This is a recurring theme and a direct consequence of the formation, and Merrick’s strategy.

While playing without an out-and-out #9 is of great tactical interest, the reality is so far it has not worked.

On paper, it suits Wellington’s key players, but on the pitch they currently lack balance and solidity both structurally and strategically at both ends of the pitch. There’s no reason it can’t succeed, but more work is needed for the Phoenix to improve their results and performances.

A-League officials have admitted the decision which led to Wellington midfielder Alex Rufer being sent off in the 1-1 draw with Macarthur was wrong, Phoenix boss David Dome says.