I started to notice a weird trend in my games of Overwatch recently, especially when playing Mystery Heroes.

No longer am I dead weight unless playing a support role in games. Maybe, just maybe, I might be okay at Overwatch.

Suddenly I’m decent on heroes I never stood a chance with, racking up gold medals and even some Play of The Game honours with more than just dumb luck.

I play differently. New ideas and tactics have been introduced to my brain and I know that watching Overwatch League is almost entirely responsible for this sudden shift.

These new tricks I’ve picked up as a benign spectator may be obvious to some but I thought I could share some of the most helpful things I’ve put into play that I learned watching Overwatch League.

General positioning
It’s one thing to know the various maps in Overwatch but another entirely to know which routes are more viable than others. Watching the pros and seeing which routes they take to avoid Widowmaker’s line of site or being cornered by an onslaught of Pharah rockets has dramatically brought down the number of random feeling deaths I’ve encountered.

Nothing feels good about being picked off by an enemy halfway across the map and learning how to avoid it makes games against these heroes much less frustrating.

When I roll Tracer or Genji from the RNG I’m much more aware of health pack locations and good flanking routes. I can take a side route in and hassle the backline with the annoying persistence expected of my roll, rather than the rush in and die tactic I used to be so fond of.

Conversely, I have a better idea of where these heroes are likely to come from when pitted against them and am caught by surprise far less often.

Perhaps the most important lesson when it comes to positioning is to always have the high ground. Any Star Wars fan should, in theory, know how crucial having this upper hand can be but before seeing some the pros set-ups I didn’t understand the true extent.

This was especially true on maps like Dorado and Hollywood where setting up on the church or the buildings in Westworld can allow a defending team to collapse on the enemy team and stop payloads in their tracks.

Group up
There’s even a dedicated button mapped to calling for it but anyone who’s played a match of Overwatch knows how hard it can be to get a team of randoms to group up. Watching the top teams, they go in together and if they’re lucky they also try to die together.

This method of play not only takes better advantage of things like Lucio’s area of effect healing but also keeps the battles even.

Overwatch is largely a numbers game and which was why Mercy’s ability to res two teammates before her patch was a must see in the league. As players die, the team with the most left alive can usually steamroll the other team and having individuals trickle in from spawn is a sure way to lose a fight.

League teams know when to back off and wait for the rest of their heroes to return after death to push in together. Learning to know when a fight is lost, save your ultimates and group up for a proper push is essential to capturing points and remembering to do this will always generate more wins. 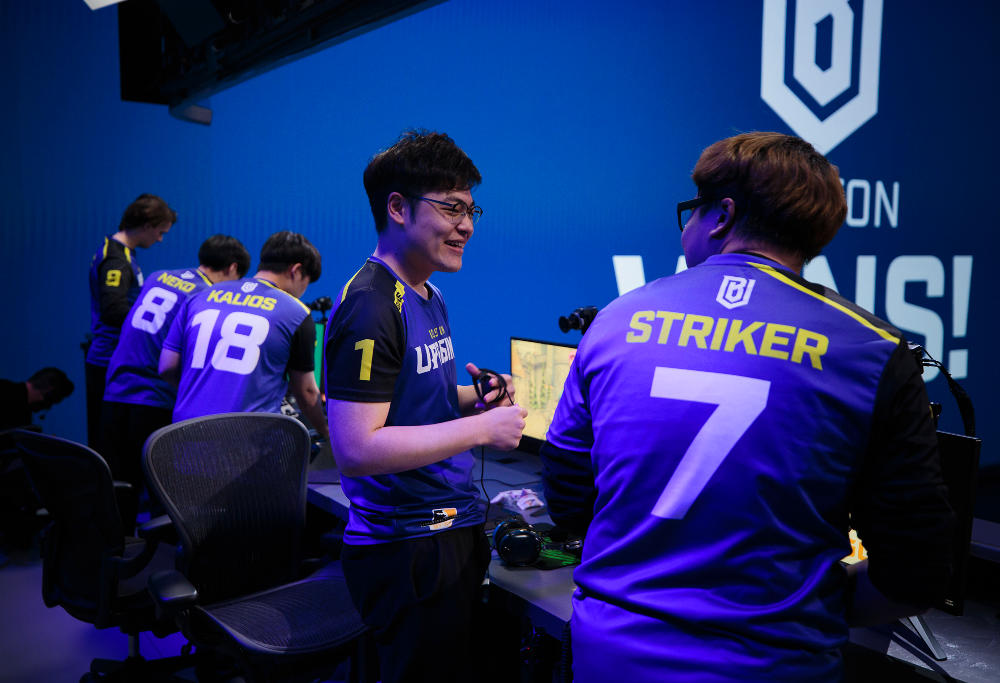 Communication
Most players know they should be grouping up but without communication, it doesn’t mean much. In between games, broadcasts of the Overwatch League will often show snippets where you can hear the teams during the previous match.

It’s usually during a particularly intense battle with a cacophony of voices all calling where to focus and what the major threats are. Additionally, teams will often have one or two members be callers who are deciding the plays and funneling information to keep everyone on the same page.

As a gamer, I am often silent. Shouting things mid-game doesn’t exactly come naturally to me but sharing information with my team has helped make a significant difference to our overall play.

On support roles telling my team when I’ve died or where I am when I need help has saved many lives. Specifically, when playing Zenyatta I make sure to let the entire team know which enemy my orb of discord is attached to make for faster, more focussed kills.

If flanking, I can give my team a heads-up about what to expect in the coming fight or when tanking I can make sure we are ready as a team before charging in.

This is perhaps my biggest change in play-style and one of the hardest challenges for me, but calling a game positively has had the most dramatic and helpful impact on my overall game and those that I play with.

Watching Overwatch League may not be as good a practice as playing the game itself, but if you’re looking for tips to improve there’s much to be gained from studying the pros. Most of these tips I gained organically through watching what worked in various matches and only realised I was implementing them when my game improved.

I’m not saying that I’m going to make my way up the ladder to Grandmaster anytime soon but watching the game played at its highest level with insightful commentary from casters and analysts has genuinely made me better at almost every aspect of playing Overwatch.