Dissecting some of Hearthstone's notable new legendaries with Mike Donais

In part two of our interview with Hearthstone senior designer Mike Donais, we discuss some notable legendaries, controversial cards and impacts on the meta The Boomsday Project has brought to the game.

You can find part one of our interview, where Donais discussed the origins of new keywords and mechanics, here.

The Roar: I wanted to talk about a handful of this set’s legendaries and, just speaking on class identity, when Crystalsmith Kangor and Zerek, Master Cloner were revealed, I know lot of people on social media thought they were, not in the wrong class, but they would’ve made sense for opposite classes. How did those cards end up in the classes that they did?

Mike Donais: So, they certainly could, like the idea of healing and lifestealing is in both Priest and Paladin, so they could’ve been in either class. Cloning was more Priest than Paladin. Paladin never really any kind of cloning going on.

The Roar: I think it was more so because if you cast a spell on Zerek, he would be resummoned?

Mike Donais: Sure. Yeah, they both have buffs, and they both have healing as part of their class identity. I think the Paladin class has used buffs a lot recently, so we didn’t want to continue going heavy on that right now.

Priest has two themes with him, one is buffing. I think that it was a good time for us to go and put a bunch of cards in that direction, and we did prefer [buffing] in this set.

There’s a whole bunch of different buff cards – some of them were very complex and weird, and do like weird things when combined together in cool ways.

One of the Priest’s identities, is that they have a lot of tricks going on, and there’s a lot of different tricks. The Priest decks are pretty hard to play right now, they’re still testing I’d say.

The Roar: Very much so. Another legendary that has made a bit of a splash is Mecha’thun. What was the thought process behind that card? Have you been surprised with how quickly people have figured out ways to reliably win games with him?

Mike Donais: Yeah, we love Mecha’thun. He’s got this great fantasy theme about ‘oh wow, just like the most badass thing ever.’ And, of course, Dr. Boom made a mech out of him, that’s exactly what Dr. Boom would do.

Mike Donais: The art, the artist did a great job, the same artist who drew C’thun, and it makes a lot of sense to have the same giant eyeball but mechanized.

We knew that a lot of people would experiment with him. We thought some people would have success. The ideal is people have a lot of fun experimenting and he ends up to be a card that like, has a low fifty per cent win rate.

So far it’s been that, so that’s great.

I think the fact that people have tried him out in five or six different classes and come up with ways to kill himself on the turn you play him in all those classes – I think that’s amazing.

As long as he doesn’t end up being a dominant part of the meta, I’ll be happy.

The Roar: The last legendary I wanted to touch on was Dr. Boom. More so because this is the second set in a row where we’ve had a new hero card added for just one class.

Was it deliberate that he and Hagatha the Witch were given to the two classes most regarded as struggling lately?

Mike Donais: I think the classes these new hero cards ended up in was more of a flavor thing. We designed the whole set, we decided Hagatha’s the one who owns the woods and she’s the most important character, in The Witchwood, so she became the hero card.

Again with Dr. Boom, we tried to figure out what class he was and there was a lot of debate and discussion. At first his hero power was to summon a boom bot, like one of his old boom bots.

But then we came up with the idea that he’s invented a mech suit for himself, because the expansion’s about mechs he’s taken to the next level.

That really rang through with us and that made it more obvious that he would be a warrior.

In either case, it was just kind of a coincidence that it went into those classes. It wasn’t driven. We make these kind of decisions like, six to eight months before the expansion comes out, so it’s hard to know what will be different.

The Roar: Can we expect to see more sort of individual hero cards in the future?

The Roar: The last specific cards I wanted to talk about from the set were a couple of Druid cards that people freaked out on social media upon reveal, they were Juicy Psychmelon, Dreampetal Forest and Gloop Sprayer. Did any of those cards have a particularly notable or difficult testing phase?

Mike Donais: Juicy Psychmelon and Gloop Sprayer, those were all cards that changed all through design. They’re cards that have a lot of power in them, and they’re high risk cards.

The thing about high risk cards is they also tend to create the most experimentation. They tend to maybe be discovered at the beginning, or maybe no one figures it out and, maybe four months or eight months later, people discover a new deck with the new cards that uses them better.

I know a lot of cards, like Juicy Psychmelon, people thought ‘this is the best card in the set’ and I’ll be like, ‘maybe, maybe don’t run it’. So that’s pretty interesting to see that.

But yeah, those are cards that changed all through design, to try to get the exact right power.

The Roar: Do you remember any of their specific earlier iterations?

Mike Donais: Not off the top of my head. I remember one card that I was following the changes to was Dr. Morrigan. At one point she swapped the cost and attack of cards in your hands when you played her. It was crazy, all kinds of combos were being built. You’d like look for low attack cards, and high cost cards. 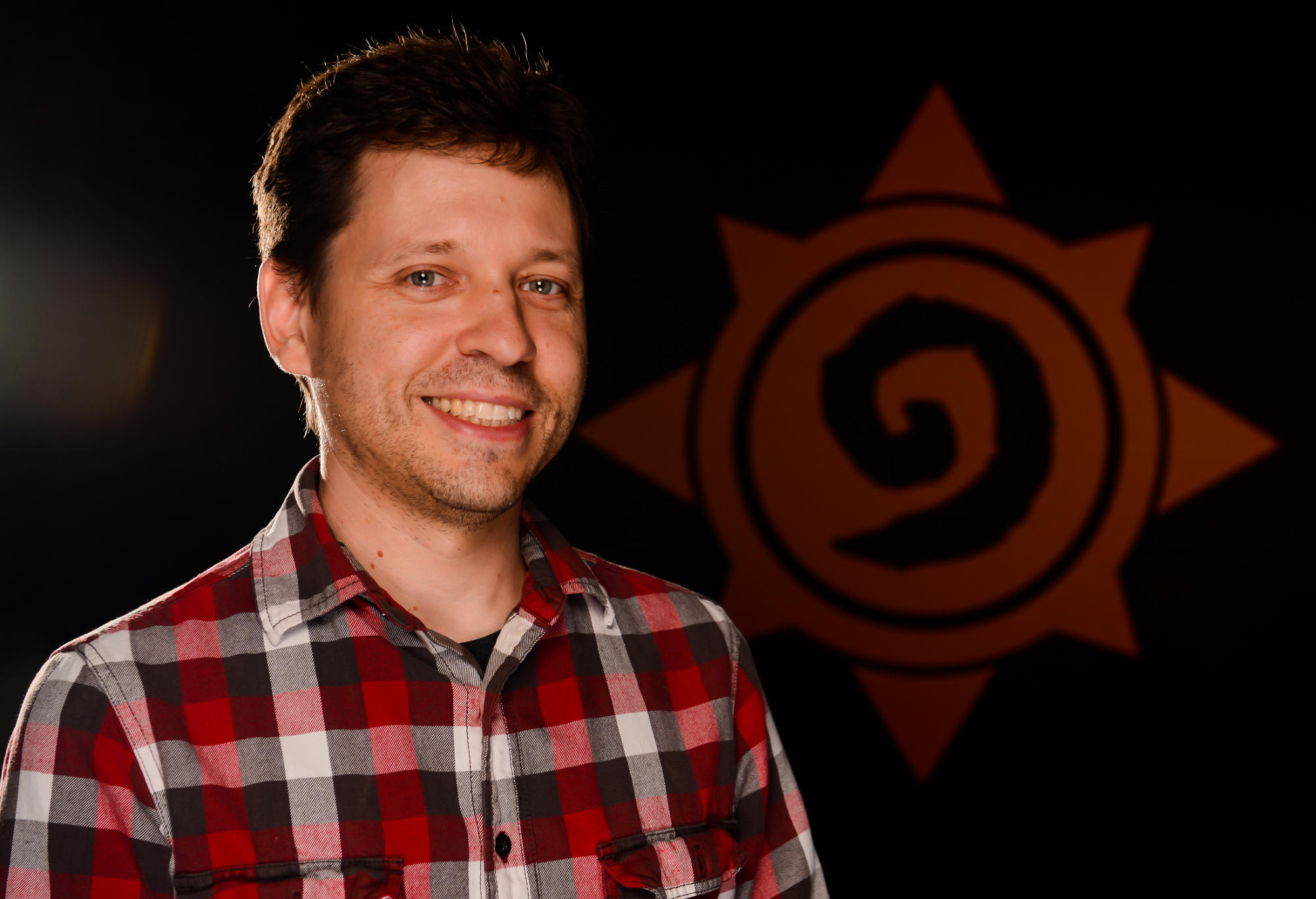 Mike Donais: Yes, that happened several times. Dr. Morrigan was, at one point, cards cost health instead of mana this turn. That was pretty fun, lots of things happened.

People died on both sides.

The Roar: I can imagine. That’s a very elaborate way to concede a game as well, if you wanted to be that way. That’s pretty funny.

So we’ve only had two weeks to observe this set’s impact on the metagame. But how has what you’ve seen so far, matched or strayed from your expectations?

A lot of different control warrior decks. I think Giggling Inventor’s slowing down aggro decks a lot. Which, the more control decks you have, the more combo decks are going to do well.

So, that’s kind of a vicious circle there. People try to figure out what the right call is, in that.

A lot of Egg decks and people are still learning how to play against eggs, do they kill them right away? Or do they leave them there and hope there’s no activators? Generally there’s activators, so you can get away with hitting them.

The Roar: Well it sounds like a varied meta game since launch then?

The Roar: It’s what you want. Just lastly, I just wanted to touch on Warlock a little bit, as obviously it’s still one of the flavours of the month as far as balance discussion goes.

Coming into Year of the Raven, Warlock was, at least regarded as one of the strongest classes around, and the “educated” word on the street is that Warlock is still one of the most powerful classes – it’s just more Zoolock now than Cubelock.

Does the fact that it’s a seemingly different archetype within Warlock mitigate that perceived domination? Or does it still bother you that one class has seemingly ruled the roost for such a time?

Mike Donais: I like seeing new decks. Three months ago no one was playing Zoolock, it hadn’t even been discovered yet, so it’s cool when new decks are invented and they stick around for a while.

I think Giggling Inventor’s going to slow down Zoolock a lot, and I think there will be less of that as we move forward.

But there’s a lot of other Warlock decks people are playing. Even warlock, you can still see playing different control decks, Demon Warlocks.

Hopefully there’s a whole bunch of different decks like that. When there’s three different Warlock decks, and you know, five different Druid decks, and one single Priest deck, its like a nice variance.

A couple of new decks you can play, I think there’s a huge variance though. I’d give it a couple more weeks before we worry too much about one class.