George Bailey will captain a Prime Minister’s XI side to face South Africa in the tourists’ only warm-up match before next month’s one-day series against Australia.

Bailey is one of four players with international experience picked in the host’s side for the October 31 day-night clash at Canberra’s Manuka Oval, alongside Nic Maddinson, Jason Behrendorff and Gurinder Sandhu.

Teenage NSW batsman Jack Edwards’ dream rookie summer will also have a chance to continue, named to play his first match against a senior national squad in the Chris Rogers-coached side.

It comes just a month after he became the youngest player to notch up a century in the domestic one-day cup at age 18 against Queensland, scoring 116 off 112 balls.

“It’s pleasing to have a number of players who have represented Australia, led by George Bailey, and as in recent years there’s a good blend of experienced cricketers and some of the country’s best young players,” selector Greg Chappell said.

“On the batting front, there are four players aged 21 or under in Josh Philippe, Jack Edwards, Max Bryant and Jason Sangha.

“Josh, Jack and Max impressed with their performances in the JLT One-Day Cup and this is a great chance to test them against an international line-up.”

South Africa will travel from Canberra to Perth for the first of three one-dayers on November 4 then play Australia in a one-off Twenty20 match on the Gold Coast. 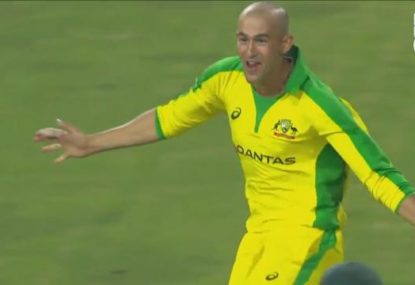 Australia made a dominant start to their tour of South Africa last night by thrashing the Proteas in the first T20I on the back of an Ashton Agat hat trick and a solid batting performance. On a Wanderers pitch that was two-paced in nature, Australia batted well to make an above-par score of 196 before […]