Wallabies scrum cornerstone Allan Alaalatoa has signed a four-year contract extension, keeping him in Australian rugby through to the 2023 World Cup.

The 24-year-old tighthead prop says he rejected interest from overseas clubs to stay long-term with the Wallabies and Super Rugby’s Brumbies.

Big and mobile, Alaalatoa has amassed 30 Test caps since his debut in 2016.

He is currently holding off the challenge for the Wallabies starting spot from rising star Taniela Tupou and 100-Test veteran Sekope Kepu as Australia prepare for their Spring Tour of Wales, Italy and England.

“I was already contracted for next year but when the opportunity came up to stay until the next Rugby World Cup, I discussed it with my family and the decision was a pretty easy one,” he said.

““The fans have also been very good to me and I appreciate their support and am looking forward to creating more memories with them with what is a strong squad pushing for a Super Rugby title,” he added.

Coach Dan McKellar said he was “very excited” by the prop’s decision to re-sign.

“He’s the cornerstone of our set-piece,” McKellar said.

“His numbers each week with ball carry, tackles made, and breakdown involvements are consistently high and his work off the ball is outstanding.

“On and off the field Al is highly respected by all at the Brumbies and he has already shown strong leadership qualities. Without doubt over the next few years we will see Allan become an important leader of our club,” he added.

Melbourne have blown the Super Rugby AU competition wide open after handing the Brumbies their first defeat of the season in a thumping 30-12 victory.

Matt To’omua has been moved to the centres for the Rebels’ Round 6 Super Rugby AU clash with the Brumbies.

Do we want Mark Ella or Michael Lynagh? Andrew Mehrtens or Carlos Spencer? The genius or the general? The Australians had the best solution of all: they picked both of them in the same team!

Fresh out of quarantine and having returned to the loving arms of avid Australian rugby fans, Nic White is set to leave his mark on Australian rugby, both domestically and internationally. 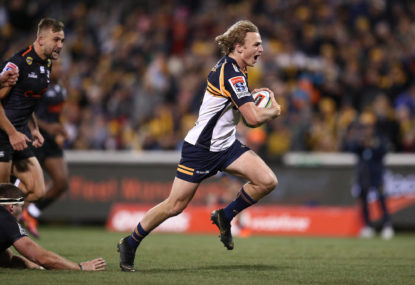