The AFL 360 show was on last night and David King made an interesting observation about Gary Ablett.

He made the assessment that the football public doesn’t celebrate Ablett enough for what he is doing.

And he is spot on. For a man in his 18th football season, he is producing amazing football in a foreign role.

When Ablett returned to the Cats at the start of last year, there seemed to be uncertainty to how to best utilise him. Some people thought he would become a Leigh Matthews-type forward, and others saw him as being the icing on the top of a Geelong premiership push. In reality, none of those things was ever going to happen.

Geelong last year didn’t use him in the right position. Having Patrick Dangerfield, Joel Selwood and Ablett hunting the ball isn’t really productive because only one can win it. And it didn’t help that he was injured for part of the year when he was still working out his place in the team.

I also think our want to dismiss Ablett as a footballer in 2019 is due to our crazy expectations on him. We still see him as that superstar onballer that can gather 35 disposals at will every game. But he’s not that player and right now Geelong doesn’t need that to be a contender. They need proper clean ball inside 50 and Gary is providing that in spades.

His first quarter, for example, last round against West Coast was probably the most influential quarter so far this year. He had ten disposals with 100 per cent efficiency and four direct score involvements that resulted in four goals.

And this wasn’t against any team, it was the reigning premiers. So you can see exactly where David King is coming from.

I also think we don’t fully appreciate just how hard it’s been for Gary to get back to full fitness. Before injuring his shoulder in 2014 he had put the best seven and a half year body of work of any footballer in history. Since that season he has played 58 out of 95 games.

He has never been an All Australian since and has never kicked over 20 goals in a season. So for the last four seasons Gary Ablett hasn’t been Gary Ablett. And the football public has craved for his magic to return. They want the running, smooth moving player to materialise.

He had also been questioned constantly over his commitment to the Suns, which I thought was quite unfair. The man literally carried the team on his shoulders for the best part of four years and once he left the field they collapsed. He would’ve felt distraught over the events. But to question his love for the club is just spiteful.

So after a disappointing 2018 by the Cats’ standards, they decided to shake things up. They made a few positional moves around their superstars. They said to Selwood, play on a wing. And they told Ablett to become the best half forward you can be.

And so far both moves have allowed the team to spread their talent stocks around the whole ground better. They seem a team that’s sure of everyone’s roles.

Watching some of Geelong’s games last year felt very straightforward. You knew they style of play and who had to do it for them to have a chance. Now you watch them play and you’re intrigued with who will stand up and how they will do it.

So I have to congratulate Gary Ablett. For realigning his football career and his standing in the game. I pray that this year is the crystallisation of Ablett’s legendary status as the greatest footballer of all time.

The man has done it all in the game and then some. Wouldn’t it be fantastic to see him go out with a bang? Enjoy his magic while it’s happening, because the end is nearer than we think. 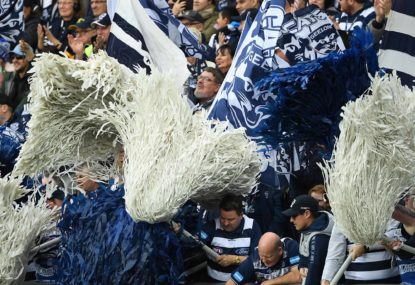