The SANFL stars deserving of a mid-season opportunity

With the mid-season draft fast approaching, 308 players are hoping their dreams will become a reality.

Many of the hopefuls currently ply their trade in state competitions across Australia, where they have played senior reserves football in the hope of catching the eye of recruiters.

Last week, I looked into the WAFL and which players deserve to be looked at.

This week, there are six SANFL players in particular that are worth consideration by AFL clubs for either an immediate impact, or to help shore up their future stocks.

Cory Gregson (Glenelg) – 22yo, 175cm, 78kgs – 15 disp, 6.2 tcks, 3.2 i50s, 5 goals, 1 behind
There is a lot of talk of clubs being interested in Gregson ahead of the mid-season draft, as arguably the best pressure forward in the SANFL in the early stages. Having played 39 AFL games for Geelong, the 22-year-old’s experience at the highest level only further adds to his value as a mid-season recruit.

Gregson’s fitness perhaps limits him to become a midfielder at any stage, but with forward pressure still a highly effective way of approaching the game, his efficient tackling and ability to find teammates in goal-scoring positions make him the ideal target for a team like GWS or Port Adelaide.

Lachlan Hosie (Glenelg) – 22yo, 189cm, 78kgs – 15 disp, 5.5mks, 2.3 tcks, 16 goals, 6 behind
The leading goalkicker after six rounds in the SANFL, Hosie is one of just four SANFL players who is due to undergo medical testing ahead of the mid-season draft. The 22-year-old has been a livewire in attack this season, with no less than 20 scoring shots in his last four matches.

Hosie has played a strong role for the Tigers this season in their strong start to the season, and AFL teams may be interested in selecting Hosie as an insurance, stay-at-home forward option. Hosie averages 15 disposals, but doesn’t need many to have a big impact. In 2018 he kicked 24 goals in 13 games, averaging just nine disposals per game.

The mid-sized forwards tend to be overlooked, but sustained attacking consistency may help Hosie’s value.

Jack Hayes (Woodville West-Torrens) – 23-year-old, 194cm, 93kgs – 15.2 disp, 6.7 mks, 3.8 tcks, 12 goals, 13 behinds
If teams are searching for some mature-age x-factor in the mid-season draft, Jack Hayes should be on the list. Once touted as a potential first-round pick in 2014, Hayes has really come into his own over the past two seasons in the SANFL, playing as a tall half-forward flanker with good marking and a constant ability to hit the scoreboard.

Again, it’s the size and athleticism that make Hayes an intriguing option that won’t be spoken about too much in the lead-up to the mid-season draft. In fact, despite his clear ability in front of goal, Hayes looks the type that an AFL club would want to throw straight back into defence to play a James Sicily-type of role, given his ability to read the play. Hayes warrants some attention for a draft this season, whether it comes in May or November. 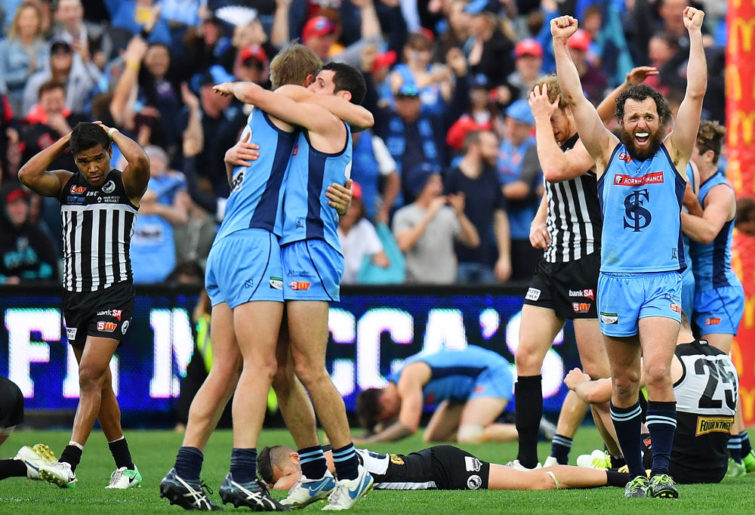 Will Snelling (West Adelaide) – 21yo, 175cm, 70kgs – 29.5 disp, 8.7 tcks, 5.8 clearances, 5.2 tcks
Without the shackles of an AFL directive dictating where players play in the reserves, Snelling has been able to star for West Adelaide in 2019. After just one game for Port Adelaide, the small midfielder has been a dominant force as a contested bull in the early stages of the season.

Snelling was a rookie-listed player at the Power and, despite being well-credentialled as the captain of the South Australian u/18 team, he never really stood out in his time at the Power. Put simply, Snelling is comfortably The Bloods’ best player and has ample opportunities to shine this season.

Clubs will take note of younger players posting big numbers in the reserves and Snelling is definitely one worth looking into. If Gregson is going to be a sought-after commodity come the end of May, Snelling deserves to be as well.

Abe Davis (South Adelaide) – 2three-year-old, 194cm, 99kgs – 21.2 disp, 5.5 mks, 4.2 clearances, 9 goals, 7 behinds
The SANFL, more than any other league, produces star midfielders out of big-bodied, former AFL-listed players who were pigeonholed into one spot. Davis ended up settling in the defensive half while in the NEAFL at Sydney but was never able to break into the senior set-up.

Since moving to the SANFL, he has established himself as a strong type in the midfield while having the size and skill to hold down a key position in attack at different times. 2018 in particular, gave Davis the opportunity to highlight his tackling and athleticism, spreading from contests and averaging five marks and five tackles.

In 2019, Davis played the first three games in the midfield, producing solid numbers, but from Rounds 4-6, the 23-year-old moved forward and has averaged 19 disposals and seven marks, while kicking 8.6 in those three games.

It may be unlikely Davis gets an opportunity in the mid-season draft, but it’s another chance for a club to make a shrewd move that immediately offers them something completely different with his size and genuine versatility.

Seen as a genuine chance to be taken in the 2018 National Draft, Munn has made the adjustment to senior footy at SANFL level and has kicked four goals in his three games to date. Of course, young key position players are raw talents that need to be given time, and Munn wouldn’t have an immediate impact at all.

However, with his contested marking and ability to play as a genuine second ruckman, a lower-ranked team could see value in securing Munn’s services earlier than the 2019 National Draft. Again, the raw attributes Munn possesses could see him as a potential key defender in the future, particularly if he is drafted into an AFL system.

Professional women’s sport is dynamic, inspirational, and has the ability to be an easily viable product in the tough Australian sporting market. However, this high perception often struggles to be maintained. Throughout social media, every moment is met with heavy criticism and the media coverage is often lacking the wider impact that men’s sports may […]