Another premiership will give Chris Scott the recognition he deserves

When Melbourne defeated Geelong in the elimination final last year I had my concerns on what the 2019 season had in store for the Cats.

Geelong won 13 games in 2018 but the manner of the loss to the Demons – in which they managed only six goals – remained at the forefront of my mind. I jumped the gun and predicted Geelong would struggle to make the eight this year.

Nine rounds into the season and sitting top of the ladder with an 8-1 record it would seem that slide down the ladder is not on the radar.

Barring a catastrophic finish to the season the Cats will play finals football for the fourth consecutive season. Remarkably for the eighth season out of nine that Chris Scott has been at the helm.

New look Cats
The Geelong hierarchy obviously have full faith in the direction of the club under the tutelage of Chris Scott. This is evidenced by the club re-signing the 43 year-old last year until the end of the 2022 season.

After exiting the finals last year, Robert Walls was not surprisingly one of the first to come out and question the wisdom of this contract renewal.

“I think it’s a wrong call. To extend the coach by four or five years, it can invite trouble because things can change pretty rapidly in football. If Geelong have another disappointing exit from finals in the next year or two, there’s going to be question marks on Chris Scott.There’s no need to do it” 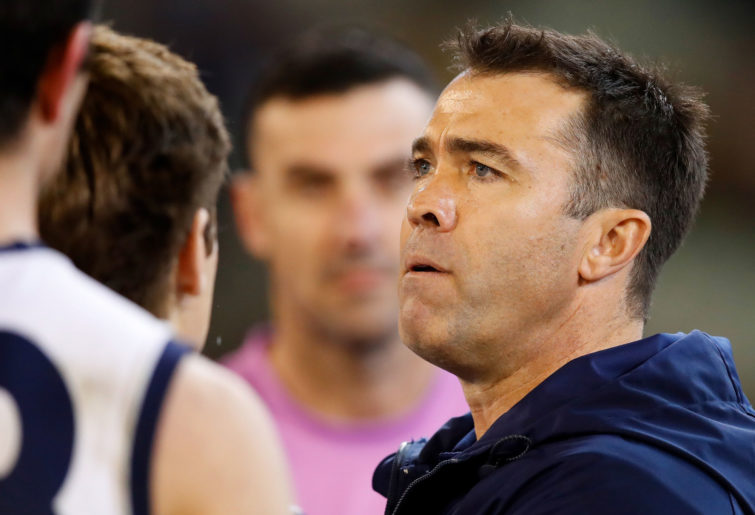 The Geelong coach has certainly divided opinion at times among the Cats faithful on whether he is the right man to take the club forward, but he remained optimistic for the upcoming season despite the disheartening finish to 2018.

“There hasn’t been a year in my time at Geelong where we haven’t shifted some aspects of the way we play. And I can guarantee we’ll be a little bit different next year.”

While there has been tweaks to the game style it has been the change in personnel which has made as much a difference as anything and importantly you can see the strong bond between players and coach.

The trade period saw the arrivals of Gary Rohan and Luke Dahlhaus who have integrated seamlessly.

The experienced players at the club are performing admirably and youngsters such as Gryan Miers, Charlie Constable and Jordan Clark have had significant impacts.

The coaching record
When you analyse the overall record of Chris Scott as senior coach then maybe I should have had a bit more faith.

Remarkably the 2011 premiership transpired when the two-time premiership player was in his first season at the club as coach.

This feat has somewhat been dismissed with a popular view he took over a highly successful team that did not require much intervention from the new coach.

This is extremely unfair and no premiership is easy to win. The Cats had been a wonderful team but they were not invincible. They lost five regular season games in 2010 and finished the season with a 41-point loss to Collingwood in the preliminary final.

Perhaps the only question mark around Scott is his overall record in finals. He is currently sitting at six wins and nine losses but this does include qualification for three Preliminary finals. That’s a return many other clubs would happily take.

A top-four finish which the Cats are currently well placed to achieve will carry the expectation of playing in a grand final. This in itself would represent significant improvement from recent seasons.

A successful finals campaign and a second premiership added to the coaching CV would elevate Chris Scott alongside some of the great coaches in our competition and undeniably silence the critics.