Sifting through the computer projections

Now we’re going to combine those numbers with the various computerised predictions from around the footy globe and see if there’s a consistent readout on the subject.

‘Following Football’ is mostly a meta-service that takes data from the different sports we cover and combines it to produce a consensus opinion on outstanding players and teams in order to honour the past and predict future performances.

Along these lines, we’ve begun keeping not only our own ‘ELO-FF’ rating system, which has been in place for the better part of a decade now, and also a meta-rating that combines nine of the most reliable and mathematically consistent systems we’ve found with the ladder percentage:

As of right now, here are the ratings for the 18 teams in the AFL from each system and their combined meta-rating and ranking after Round 11, the halfway mark of the season.

For clarity, I’ve left out all the ratings and modulated ratings from the other systems – you can always go to their websites to track those. The modulated ratings are what are combined to create the meta-rating. We translate their systems into ones like ours – a median of 50, with approximately the same range and variance.

To go maths geek on you for a moment, a team that’s one standard deviation above normal should land just below 70 when modulated to match ours. Think bell curve and you’re darned close. Non-maths folks may resume reading now.

Some of the systems are more resistant to quick change than others. For example, when a team like Melbourne started in everyone’s top five and immediately showed themselves to be far weaker than we all expected, they fell overall in the meta-rating from third to sixth to eighth to 11th over the first three weeks of the season. But in that third week’s ratings FMI and GRAFT still had them sixth and seventh respectively, while Massey and plussixone were the ones pushing the Demons down to 11th.

The variety of principles that go into the formulas create a balanced evaluation of where the teams are both at the moment and over a range of time leading up to this moment. For the record, all of these systems are predicting well above average for the year and all but one are ahead of the oddsmakers themselves.

No more talk. Here are the predictions for each club’s finish this season from those systems above that are offering current forecasts.

Pretty universal: Geelong walks away with the minor premiership, the Giants should secure second, and the Magpies and the Eagles get the double chance. Richmond is universally seen in fifth place, with Brisbane comfortably in the top eight. Adelaide should hold onto a finals spot, and Fremantle and Port Adelaide are neck and neck for the eighth and final spot.

Essendon and Hawthorn generally figure to be in that close-but-no-cigar territory, and North and the Saints look like they have a slim chance if all goes right to make a run at finals.

Then there seems to be a gap down to the bottom five, universally figured to be (in some order) Western Bulldogs, Sydney, Melbourne, Gold Coast and Carlton.

Out of curiosity let’s line all of these predictions alongside each other and see what they tell us. We’ve lined up the percentages from all three articles for comparison purposes – it shows up more as the change in probability over time rather than three equal factors or any such thing – and on a lark we’ve also combined the three percentages with a weighting towards the more current and future probabilities. This means Melbourne’s 64 per cent chance of making finals based on their fifth-place finish last year doesn’t mean all that much when they’re 3-8 today.

You can take or leave the chart as you see fit of course. It’s a curiosity, nothing more.

It says Geelong fans can relax for the next couple of months – unless they’re charting Tim Kelly’s 2020 realty searches; Carlton fans can focus exclusively on the future (as always); and Giants, Magpies, Eagles and probably Tigers fans can look at the troublespot games between now and the end of August as they relate to seeding, not whether they make finals or not.

It says that Brisbane fans really can start to get their hopes up of not only watching their team play in September on the television but also watching them at the Gabba if things go right for them.

It says that anything else that Gold Coast can manage this season will be gravy.

It says that the Sydney and Melbourne football clubs can look at the long-term condition of their rosters without stressing over what it might cost them this September. Bulldogs, Saints and Kangaroos fans can probably do the same.

It probably ramps up the stress for the faithful of the Dockers, Crows, Power and Hawks and might pique the hopes of the Bombers faithful who had given up the ghost a few rounds ago. Last summer their chances would have been about 37 per cent of making finals this year, but according to their current position and projections their chances are still about 37 per cent. Despite another horror start they’re still in a fighting position to play finals footy.

And that’s what it’s all about.

In the history of AFL drafts, none quite compare to the super draft of 2001.

Injuries are a natural part of sport, and for all the positivity and celebration in the AFL, there have been countless players who have had their careers ended through no fault of their own. 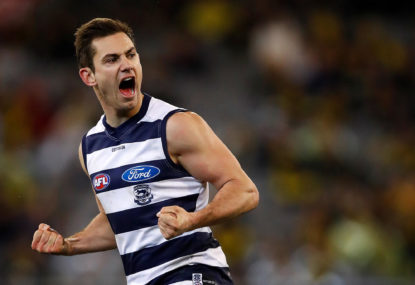 Nobody knows what awaits the AFL once COVID-19 is gone.