And so the Blues have two in a row! In one of the most thrilling finishes to a State of Origin series ever, New South Wales came away with a try on the buzzer to get the job done. Here are my player ratings for the home state.

1. James Tedesco – 9.5/10
If anyone reckons Tedesco didn’t deserve man of the match and player of the series, I’d be quizzing which game they were actually watching.

It was an unbelievable performance. Outside of scoring the game-winning try and another as he took matters into his own hands, the fullback had another trademark Origin performance with 220 running metres and only a single error to his name.

Just an unreal effort from a true star of the game.

2. Blake Ferguson – 7.5
Ferguson, despite the jokes about his nose and errors with the footy, was rock solid. Didn’t make a single mistake with the footy and was strong in defence throughout.

Of course, he also played a heavy hand in the game-winning try, tip-toeing down the sideline like he was on a balance beam at the gymnastics, but with that in his game and consistent strong starts to sets, you can’t fault the big winger.

3. Tom Trbojevic – 7
Not nearly as much involvement as he had in Perth, but then, it was a fairly different game.

Trbojevic did miss a couple of important tackles, but other than that, had a pretty spotless game.

4. Jack Wighton – 6.5
Wighton has really impressed me in the centres. As sceptical as I was (and I wasn’t alone), he has gone looking for work, been solid in defence and done a job for the Blues out wide.

Unfortunately, three errors, including a dumb forced pass with tackles up the sleeve, drag his mark from Game 3 down slightly.

5. Josh Addo-Carr – 6.5
Addo-Carr may have only made 90 metres, but it was the quality of those metres – 23 were post-contact – which stood him out on the edge.

What the Blues did so well in Game 2 – starting sets – was on display again as they tried to batter the Queenslanders, and while it wasn’t quite as good as it was in Perth, there is no question the Foxx’s efforts played a fair role in that.

6. James Maloney – 6
While it might be hard to fathom some of the plays Maloney put together in the final quarter, when the Blues were seemingly playing as if they already had the game in the bag, it’s hard to deny the Panther’s overall quality.

His kicking game was mostly accurate, his attacking decisions sound, and his goal-kicking good.

Unfortunately, missing ten out of 25 attempted tackles doesn’t really cut the mustard, although his ball control and discipline in a penalty-filled first half was strong.

7. Mitchell Pearce – 6
Ah Pearce. The man finally has an Origin series under his belt.

He didn’t do a hell of a lot wrong last night either. Like Maloney, some plays at the back end of the game made no sense, rubber stamping an invitation for Queensland to come back into the game.

But he took a back seat, didn’t overplay his hand, and came up with the cut-out ball which sealed the deal.

8. Daniel Saifiti – 5
Hard to really assess the Knights prop fairly. He started the game and had some really strong charges in the minutes he was afforded, but then didn’t come back on after his opening 21-minute stint.

A shame for Saifiti, but he helped build the platform which saw the Blues be first on the board, and wasn’t involved in any mistakes.

9. Damien Cook – 8.5
Cook continues to impress in the toughest arena of them all. The best aspect of his game was the way he was able to learn from the previous two matches.

Whereas maybe he did too much ball running early in the series, his mixture of control and creativity was spot on last night, assessing each situation perfectly.

One of the Blues’ best, he also had more than 100 metres and 44 tackles across the 80 minutes.

15. David Klemmer – 7
Shook off his initial selection drubbing like an absolute star. Was fast out of the gates and maintained the rage every time he was called on.

While he was a fraction slow in the play-the-ball department, it was a typical Klemmer game as he cleared 100 metres and just played good footy. 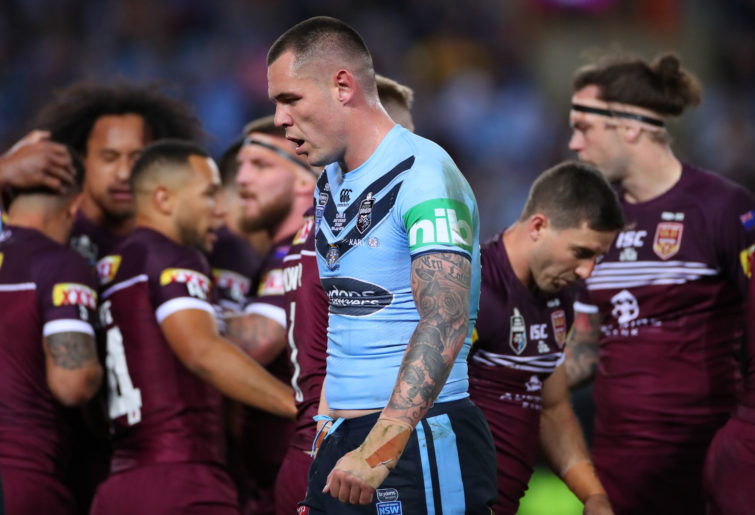 11. Boyd Cordner – 8
If the Blues could have a second man of the match from the non-spine positions, then Cordner was it. The captain put in a performance which you’d expect from a leader such as himself, and just never stopped trying.

Whenever the Blues needed a big run out of their own end, he provided it. Whenever a tackle needed to be made, Cordner was there.

He may not get the wraps he deserves, but without his work ethic and leadership, the Blues would not be waking up with the shield this morning.

12. Tyson Frizell – 6.5
The Friz played a majority of the game and was strong throughout. He struggled a little bit at the back end of the first half, but then, most of the Blues did.

Outside of that, his runs all looked like they had the potential to inflict damage and his tackles were jarring. In the end, he made 44 of those at a fairly high percentage and work rate.

13. Jake Trbojevic – 7
I wonder if Trbojevic has ever let anyone down. In a game where the Blues missed 36 tackles for an efficiency rating of 86 per cent, Trbojevic made 39 and didn’t miss a single one.

He was also dangerous with the ball and often looked like breaching the Queensland line.

10. Paul Vaughan – 7.5
Vaughan had a really strong game off the bench. Provided spark to get the Blues going against the run of play late in the first half, and continued strongly early in the second half.

Had seven tackle busts in seven runs, bending the line every time he got his hands on the footy, and also came up with his team’s first try.

14. Dale Finucane – 6
Finucane is a player who should have been picked for Origin years ago. He won’t get the credit he deserves, but he will produce the same crucial performance game in and game out.

16. Cameron Murray – 6
Murray had a strong impact when he was introduced in the second half. Fresh legs obviously helped, and while he didn’t nail everything 100 per cent, he had Queensland back-pedalling at points.

17. Wade Graham – 4.5
Unfortunately, Graham appears to have torn his hamstring after being pulled out of the game during the second half. It limited his minutes and impact, but still a strong performance.