Vale James Small, a hero of the greatest ever World Cup final

The rugby world was rocked last week by the passing of another icon from the epic 1995 Rugby World Cup final, when former Springboks winger James Small suffered a suspected heart attack, aged 50.

He is the fourth player from the match to have departed this world much too early. Team-mates Ruben Kruger (cancer) and Joost van der Westhuizen (motor neurone disease) died in 2010 and 2017, respectively. Giant All Blacks winger Jonah Lomu succumbed to a rare kidney disorder in 2015.

Much has already been written of this, of course, and it is not my intention here to pen the obituaries nor recap the Test careers of legendary players whose exploits on the rugby pitch are well known by all true fans of the game.

But such tragic news does give cause for reflection. Kruger, Lomu, Van der Westhuizen and Small all played a central role in that epic final at Johannesburg’s Ellis Park 24 years ago. Those of us old enough to recall the match are unlikely to ever forget it.

The match had everything, pitting the two greatest teams in international rugby history against one another on the biggest stage of all.

South Africa were the hosts, playing at their first World Cup after political isolation had ruled them out of the first two. They had the full support of president Nelson Mandela and, by all accounts, much of the nation’s non-white majority.

The All Blacks had won the inaugural tournament in their absence, then beat the Springboks in their first three encounters of the post-Apartheid era, thus closing the gap between the two age-old rivals to 20-18 in South Africa’s favour over all time.

But there is no question New Zealand were the form team and widely tipped to lift the trophy again after sweeping all before them. And it was the youthful Lomu – virtually unknown prior to the tournament – who grabbed all the headlines, running amok against the Celtic nations, then pulverising England with four electrifying tries in the semi-final.

The Springboks, conversely, were lucky to be there, after holding out France by the skin of their teeth in a rain-drenched semi-final. The team that had gone unbeaten in a home series throughout the entire first half of the 20th Century had lost its air of invincibility.

From the opening kick-off it became apparent the final was not going to follow the script, however. South Africa’s defence had somehow figured out how to contain Lomu. Not that the big man didn’t terrorise them with a few of his trademark storming runs. Only, the Springboks tackled like demons.

Small was assigned the unenviable task of marking Lomu that day and performed the role admirably. 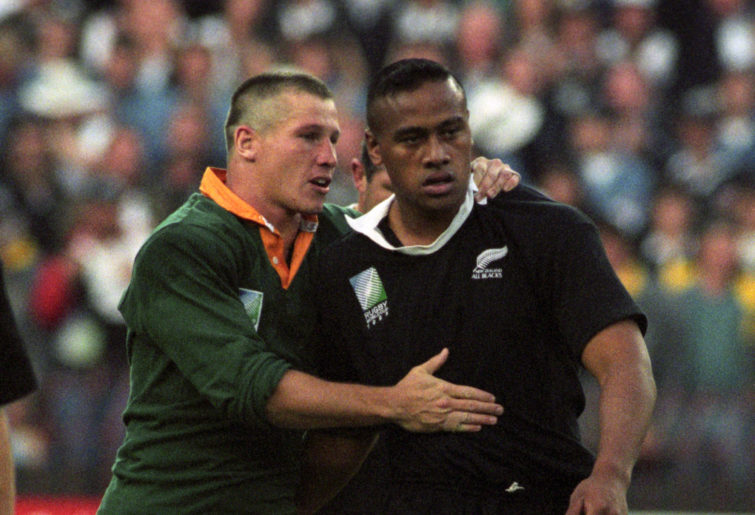 But if one moment exemplified the Springboks’ effort that day, it was when wiry halfback Joost van der Westhuizen stopped the All Blacks colossus in his tracks.

In Lomu’s moving documentary Back to South Africa, produced two decades after the event, he pays a visit to Van der Westhuizen at his Pretoria home. It was the tackle which “prevented us winning the World Cup” he told the former Springboks legend, by then using a wheelchair.

There were plenty more heroes in green that day, including a couple of others whose first names began with J. Joel Stransky kicked all the home team’s points, including the winning drop goal deep into extra time, while stocky centre Japie Mulder was another to the fore of a mighty defensive effort.

Of course, I haven’t even mentioned the forward pack, with Kruger right there alongside captain Francois Pienaar and No.8 Mark Andrews in the Springboks back row. The tight five also produced a super human effort against a formidable All Blacks unit.

But it has always been the back line stars that have captured my attention in rugby and left an indelible impression on my memory. For that reason the reference in my title for this piece is to the late back line heroes Jonah Lomu, Joost van der Westhuizen and James Small – the three Js of the third World Cup final.

It was a game I personally wanted to see the Springboks win, despite my New Zealand origins. I even won the office sweepstakes with my prediction – but perhaps lost a few friends in the process! My rationale was simple enough: international rugby and its showpiece event needed a strong South Africa back in the frame.

It certainly got that after a riveting 110-minute final that had the 63,000 spectators and millions of TV viewers around the world on the edge of their seats from start to finish. At the end of it all President Mandela was there to award the trophy to Captain Pienaar.

This was the tournament at which rugby truly shed its elitist image and became a sport for all. South Africans of all backgrounds cheered for the Springboks, Lomu made international headlines, and Clint Eastwood even made a movie about it. 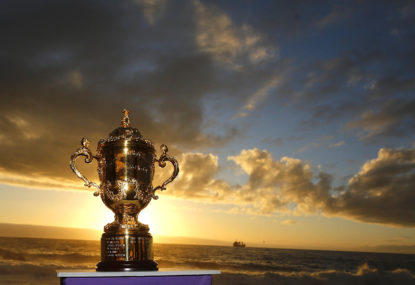 I suppose it is natural that after every Rugby World Cup there will be analysis and speculation over what worked, what didn’t work and suggestions coming forth on what World Rugby can do to improve the game. 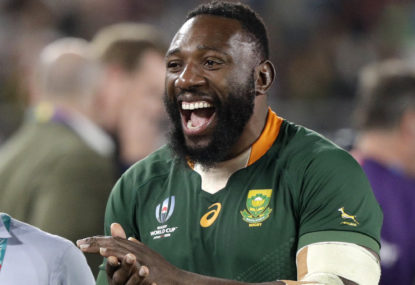 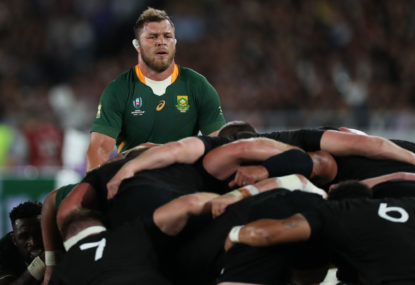