The Brisbane Lions are one of the feel-good stories of 2019 with the club sitting third and primed to play finals football for the first time since 2009.

Amongst many of the Brisbane success stories is the form of Charlie Cameron, a man who celebrated a significant milestone by playing his 100th AFL game against Port Adelaide on Sunday.

The 25 year-old has had an outstanding year to date and I have to put my hand up, he has developed into a much more valuable player than what I predicted when the Crows picked him up in the 2013 rookie draft.

From a Crow to a Lion
When the forward vacated Adelaide at the end of the 2017 season I felt the Crows would comfortably cover his absence. Whoops.

We always saw that glimpse of class and speed with the ability to put great pressure on the opposition but I felt he still wasn’t doing enough to put his selection in the senior team beyond doubt.

During the 2017 season the form of the dynamic forward was sporadic and very well could have been dropped back to the SANFL.

After kicking three goals in Round 10 the forward failed to kick more than a single goal in the next 12 games.

Finishing with six in total during this period along with six games registering ten possessions or less.

Don Pyke showed plenty of patience in Cameron and this faith was rewarded when the forward played the best game of his career.

Five goals in a best on ground performance in the preliminary final against Geelong as the Crows made it to the last day in September.

The less said about the grand final for Adelaide fans the better but this would be the final game Cameron played for Adelaide and he was traded to Brisbane for pick 12 after a total of 73 games.

I was adamant at the time this was a trading masterstroke for Adelaide. Two years later and the pendulum is swinging in the Lions favour. 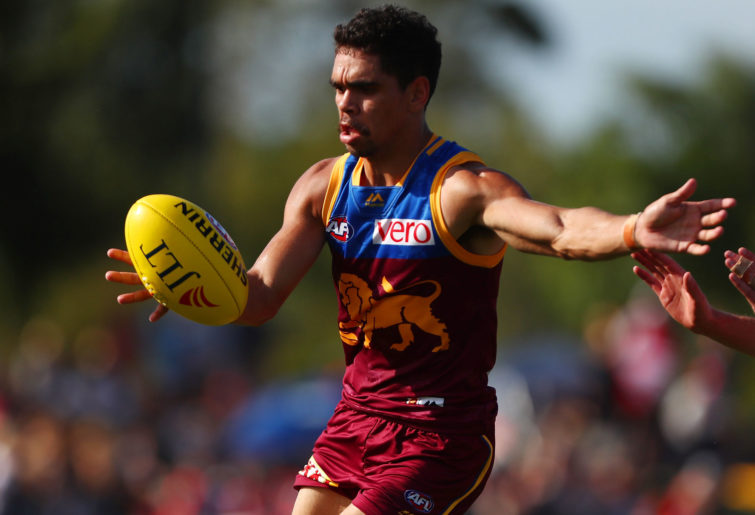 All Australian form
The stats in 2019 confirm what a vital cog the former Crow is in the Brisbane team. Currently ranked sixth in the league for goals and top twenty for goal assists and tackles inside 50.

The form line tells the tale. 12 goals in the last four matches and Charlie Cameron is rightfully in the mix for All Australian selection as the in-form small forward of the competition.

Yes I am late to the party but Charlie Cameron is a star. It only took two hours sitting in the outer at Adelaide Oval watching him pull down the pants of the team I support to see the light.

The AFL has delayed the start of Friday night’s clash between Richmond and Brisbane because of heavy traffic.

Brisbane Lions are ready to take the next step

As one king of the jungle has roared its last, another is perfectly placed to take their place.

Brisbane Lions are ready to take the next step

Star Brisbane forward Joe Daniher has been fined for staging during the Lions’ comprehensive AFL win against Geelong.