On Tuesday I hypothesised on the potential positives for 2019-20 of those A-League clubs looking to return to the top six.

Wellington Phoenix will be hoping for one thing; that the massive losses they have suffered in the off-season can indeed be overcome. Put simply, the Phoenix have been whacked.

The departure of exciting new A-League manager Mark Rudan is a blow and Ufuk Talay takes on an enormous task in attempting to continue the work down last season in windy Wellington.

Western United have poached Filip Kurto from the Phoenix goal mouth as well as veteran Andrew Durante. Roy Krishna, Max Burgess and Tom Doyle also leave huge holes in the squad and Sarpreet Singh’s exciting move to Germany robs them of their most promising player.

For Wellington fans, being able to effectively replace such quality will be their main hope.

Melbourne City, for all their promise and potential, again failed to deliver in 2018-19. Fans continued to call for the head of Warren Joyce and finally, after much stubborn resistance from the owners, can now wallow in positivity and optimism with the arrival of Erick Mombaerts in Melbourne.

Will City fans be optimistic? (Photo by Daniel Pockett/Getty Images)

The 64-year-old brings a wealth of experience and will be given the tools to succeed, with a pair of Uruguayans in Adrian Luna and Javier Cabrera arriving to boost City’s attacking stocks and the valuable Josh Brillante joining the holding midfield.

The A-League surname of the season belongs to their new 28-year-old Austrian defender Richard Windbichler and he arrives with a reputation for quality, while Scott Galloway is a shrewd pickup after a break out season in Adelaide.

More disappointing than any loss has been the style of football and ponderous play that City produced with Joyce at the helm. Fans will hope for anything but under the Frenchman this season.

Adelaide United are a very consistent football club, usually there or thereabouts. Yet the Reds’ fans will be hoping that the departure of inspirational captain Isaias will not have a negative impact on the squad.

The Spaniard has been the backbone of the Adelaide midfield for six seasons and with little movement in the transfer market to this point, doesn’t appear to have been replaced.

Dutchman Michael Maria may be the answer, depending on how new manager Gertjan Verbeek intends to utilise him and Riley McGree returns home to add some real punch on the edge of the attacking box. Never forget that McGree is still just 20.

The Reds look like a relative late finisher when it comes to pre-season recruitment. The fans will be hoping they get it right with the losses of Galloway and Isaias considerable holes to fill.

After finishing third on the ladder last season and threatening to produce another championship run to stun those above, Melbourne Victory blew a gasket against a hot Sydney FC in the semi-final and suffered an embarrassing 6-1 loss.

The massive supporter base will be hoping that the most potentially damaging front three in the competition is exactly that, when Ola Toivonen, Andrew Nabbout and Robbie Kruse get to know each other a little better.

Fans will be crossing their fingers, praying that Kruse and Nabbout can fill the void created by the departures of Kosta Barbarouses and Keisuke Honda. If new manager Marco Kurz can make that happen, all A-League competition had best be ready.

Sydney FC won the championship, yet take penultimate status in this piece after finishing second in the race for the Premier’s Plate, still the purest form of football competition.

A-League squads are in constant flux and once again the sky blues have farewelled much quality from their stocks. In 2018-19, manager Steve Corica was able to find the magic formula after a considerable exodus following the previous campaign, yet doing it all over again will be a challenge.

The hope will be that the arrivals of Kosta Barbarouses, Alexander Baumjohann and Luke Brattan will fill some of the gaps and that Anthony Caceres and Ryan McGowan provide the depth across the squad that Corica will be requiring come the Asian Champions League.

For Tony Popovic and the Perth Glory it is a simple equation. Back it up. The men from the west were outstanding last season and many would argue deserving of the championship. Yet that is a dangerous word to use in the world of sport.

Glory fans will also be looking forward to seeing more from Nick D’Agostino than he showed in Brisbane and be hopeful that Korean defender Kim Soo-Beom further strengthens Popovic’s improving defence.

However, Glory fans’ greatest hope will be that star striker Bruno Fornaroli impresses in his skin-fold tests during pre-season and is ready to rumble from day one of A-League action.

Despite the loss of Jason Davidson, the Perth squad looks equally as strong as last season; with Fornaroli firing in the front line, the Glory fans will be hoping that a redemptive A-League championship will be delivered next May.

Steven Cook was understandably sent-off for the crazy first half handball. 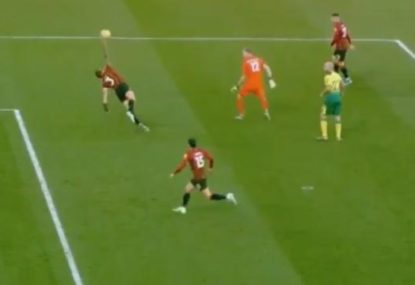 Ignacio Pussetto was there to save the day for Watford on debut, as the match finished 0-0. 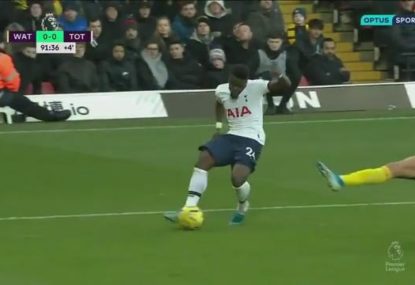 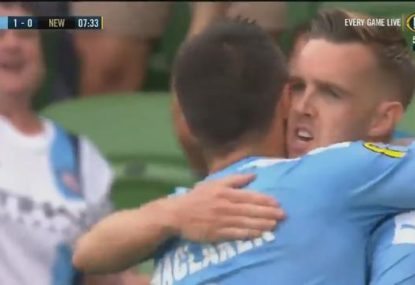 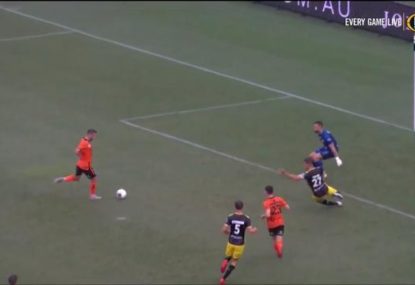 But he wasn’t quite so flash when it came to using his hands. 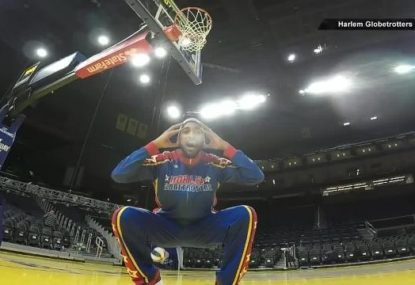