AFL Team of the Week: Round 21

For most, Round 21 won’t be a weekend of footy we’ll be hoping to look back on in the future, but it still provided plenty of great individual performances which are highlighted in the Team of the Week.

Back Pocket – Nick Vlastuin (Richmond)
Was a rock in a Richmond backline that kept Carlton to just six goals on Sunday at the MCG. Vlastuin had 17 possessions, using it at a safe 76 per cent efficiency in trying weather conditions, while he hauled in six grabs. The Tigers’ backline is absolutely humming at the moment, conceding an average 61.3 points from their last seven games.

Full Back – James Frawley (Hawthorn)
The nearly 31-year-old’s future at the Hawks has been questioned at times this season, but Frawley showed he still brings plenty of value to the Hawthorn backline with his job on Coleman Medal leader Jeremy Cameron.

Yes, the arctic conditions weren’t conducive for key forwards, but Cameron finished with just one major, while Frawley had 16 touches at 87 per cent efficiency, took four marks and had nine spoils.

Back Pocket – Tom Stewart (Geelong)
Would not have believed his luck on Saturday night as North Melbourne continuously bombed the ball forward into his vicinity. Stewart was an impenetrable wall for the Kangaroos as they were kept to their lowest score in club history.

The Geelong defender had 19 possessions at a perfect 100 per cent efficiency, nine of them were rebounds from defensive 50, while he finished with 500 metres gained along with seven grabs, four of them intercepts.

Half Back – Shane Savage (St Kilda)
Continued his fine season with a superb stopping job on Fremantle star Michael Walters on Sunday at Marvel. Walters was kept to just 13 touches and a single goal, with Savage amassing 23 possessions, seven of them rebounds from defensive 50, six grabs, three tackles and six spoils.

Centre Half Back – Tom Jonas (Port Adelaide)
Jonas has experienced a brutal first year as co-captain of the Power, but Saturday afternoon against the Swans was arguably the best game of his season.

He was particularly attacking instead of playing a stopping role, finishing with a season-high 24 possessions (465 metres gained) at 91 per cent efficiency, which included eight defensive 50 rebounds, while he hauled in six grabs, three of them intercepts and two of them contested.

Half Back – James Sicily (Hawthorn)
A supreme performance from the Hawthorn star defender, the Giants had no answer for Sicily on Friday night in snowy Canberra. The 24-year-old mopped up plenty of opposition forward thrusts, finishing with a career-high 33 disposals and a massive 700 metres gained. He also took six grabs and had six spoils. 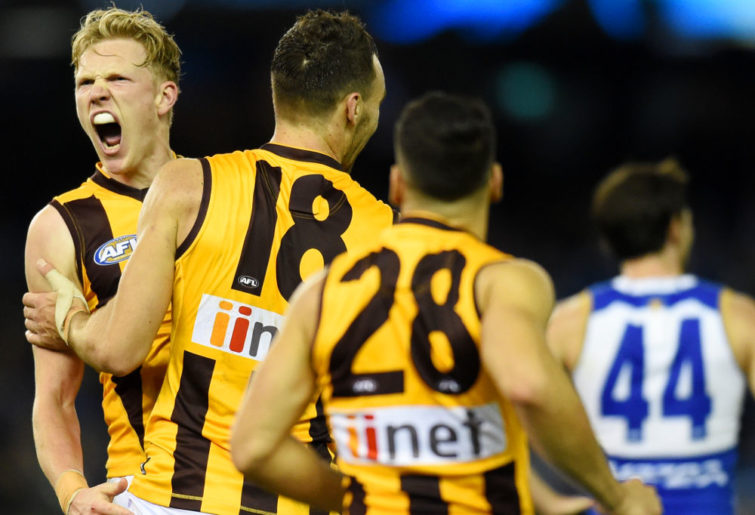 Wing – Lachie Hunter (Western Bulldogs)
Ran rampant against a dismal Essendon outfit on Saturday night under the lid at Marvel. The hard-running Hunter accrued 672 metres gained from his 34 touches, while he took nine marks and had 10 score involvements in a very busy night.

Centre – Matt Crouch (Adelaide)
Fought valiantly in a losing effort for the Crows over in the west, amassing a monster 43 possessions against the Eagles. 18 of those were contested, while he won nine clearances to go with his eight grabs and four tackles.

Wing – Isaac Smith (Hawthorn)
Another ‘over 30’ from Hawthorn who delivered in spades on Friday night, Smith’s run and carry was crucial as he gained a massive 761 metres from his 28 disposals and 10 inside 50s.

Half Forward – Jack Darling (West Coast)
Stayed in touch with the Coleman Medal race with three majors to go with his 16 touches and nine marks. Darling also applied plenty of forward pressure with seven tackles in a game in which he notched up his 50th goal of the season. The only other time he has done that came in his second year in 2012.

Centre Half Forward – Brody Mihocek (Collingwood)
Was the most imposing forward on the ground on Saturday afternoon at the MCG, finishing with a bag of four goals from his 12 disposals and seven marks, three of which came inside 50.

Like Darling, Mihocek also got busy defensively, laying six tackles, four of them in the attacking half, while he had eight score involvements.

It was the sixth time Mihocek has equalled his career-high of four majors that he set in his very first match last year.

Half Forward – Jack Graham (Richmond)
A dominant performance from the young Tiger, who doesn’t mind kicking bags of goals at the MCG at the pointy end of the season. Finished with 22 possessions, a massive 14 tackles and four majors, including three in a second quarter blitz.

Has been one of Richmond’s best players over the past three weeks, which bodes well going into another finals campaign.

Forward Pocket – Charlie Cameron (Brisbane)
The human highlight reel was at it again on Saturday against Gold Coast in QClash 18, treating the 22,530 fans that turned up to the Gabba to a spectacular show. Cameron slotted a career-high six goals, which very easily could have been seven if not for a shank on the three-quarter time siren. Is now on the verge of kicking 50 goals in a season for the first time in his career. 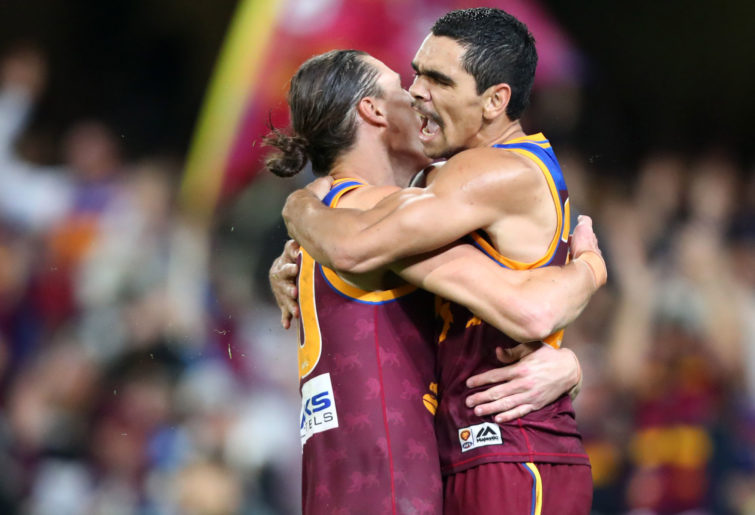 Full Forward – Tom Hawkins (Geelong)
The hulking Cat was superb on Saturday night, albeit a bit inaccurate in front of the big sticks. Amassed 16 possessions and hauled in 13 grabs, two of them contested and a massive seven of them inside 50.

Also had seven score involvements, but could not make them count when he got the ball in his hands, booting 2.4. Has two games left to close the six goal gap between him and a maiden Coleman Medal.

Forward Pocket – Darcy Fogarty (Adelaide)
The selectors at the Crows who opted for the teenage Fogarty over veteran forward Josh Jenkins would have slept easy on Sunday night despite Adelaide’s 10 point loss to the reigning premiers.

In his 11th senior game and just his second of the season, the 19-year-old booted five goals from 12 disposals and seven marks. All of a sudden, the ‘Adelaide have no exciting young talent’ narrative is looking a bit shaky.

Ruckman – Jonathon Ceglar (Hawthorn)
Was given the mammoth task of taking on the GWS two-pronged ruck attack of Shane Mumford and Dawson Simpson in the absence of star Hawthorn big man Ben McEvoy. Ceglar passed the test with flying colours, finishing with 16 touches, a season-high 35 hitouts and a career-high eight clearances.

Ruck Rover – Nat Fyfe (Fremantle)
The Fremantle superstar did everything he could to drag his side over the line against the Saints, amassing 35 possessions, 16 of them contested, winning seven clearances, taking five grabs, three of them intercepts, kicking the ball inside 50 on 11 occasions, and kicking two goals from his 11 score involvements. Likely to get the three votes from the men in green, is he likely to win a second Brownlow Medal?

Interchange – Jarryd Lyons (Brisbane)
Huge performance from Lyons against the team that discarded him last year, the ex-Sun found plenty of the ball with 34 touches and a huge 686 metres gained. He also had eight inside 50s to go with seven clearances, eight marks, seven tackles and two goals. Unlucky not to be awarded the Marcus Ashcroft Medal as the best player afield in the QClash. 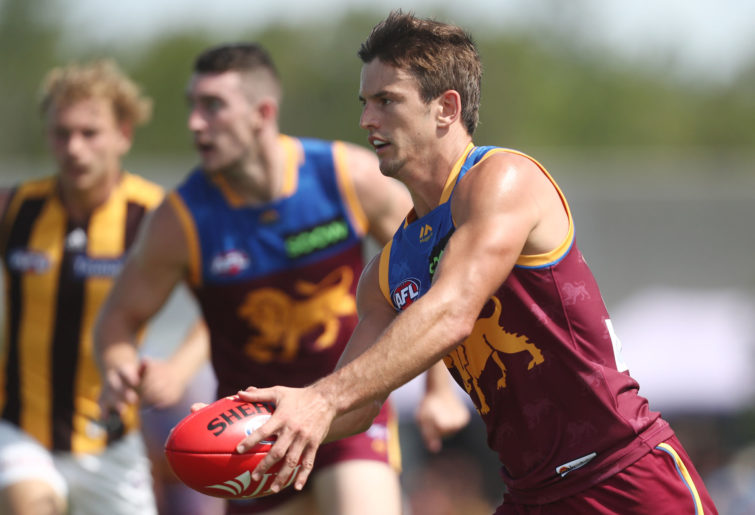 Interchange – Darcy Byrne-Jones (Port Adelaide)
Along with Dunkley and Marshall, Byrne-Jones is certainly in the conversation for the most improved players in 2019. His form since the middle part of the year has been exceptional and it continued on Saturday against Sydney at the Adelaide Oval.

The 23-year-old collected 28 touches, gaining 562 metres in the process along with his seven inside 50s, while he was also dangerous in the air with seven grabs, four of them intercepts.

Interchange – Scott Pendlebury (Collingwood)
The Magpies’ skipper provided some class in a game bereft of it on Saturday afternoon at the MCG, finishing with 23 possessions, 12 of them contested at a deadly 91 per cent efficiency, five inside 50s, four marks, four tackles and two goals from eight score involvements.

Having kicked just four majors from his first 16 games this season, Pendlebury has now booted seven from his last four games. Will reach his 300th game milestone in the first week of the finals, which will be a huge occasion.

Interchange – Patrick Dangerfield (Geelong)
The superstar Cat was in everything on Saturday night as Geelong dismantled a horrific North Melbourne side in front of an adoring-but-cold home crowd.

Dangerfield racked up 33 disposals, 16 of them contested, won seven clearances, had seven score involvements (including a goal), took seven grabs and laid three tackles, two of those inside 50.

Emergency – James Worpel (Hawthorn)
Another fine performance from the young Hawthorn gun, Worpel dominated in the middle with 31 touches, 14 of those contested, eight clearances, seven score involvements and six tackles. Used it at only 48 per cent efficiency, which is why he doesn’t make the team of 22.

20 of those touches were contested, while he also won eight clearances as well as taking eight marks and laying five tackles.

He worked incredibly hard up and down the ground all night, highlighted by his six rebounds from defensive 50 and his five deliveries inside the attacking half.

Emergency – Toby McLean (Western Bulldogs)
It has been a funny old year for the premiership Bulldog, but he showed his immense talent on Saturday night’s demolition job of the Bombers at Marvel Stadium.

McLean collected 22 disposals at 90 per cent efficiency, took five marks, two of them inside 50, laid four tackles, three of those in the attacking half, while he kicked three goals from his 11 score involvements.

Emergency – Shane Edwards (Richmond)
Celebrated game 250 in style with a superb performance in the wet against Carlton at the MCG. Edwards collected 27 touches, 13 of those contested at 74 per cent efficiency, took six grabs, laid nine tackles and booted a goal in a polished display.

One of the great goals from Jack Newnes… but should he have had the kick in the first place? 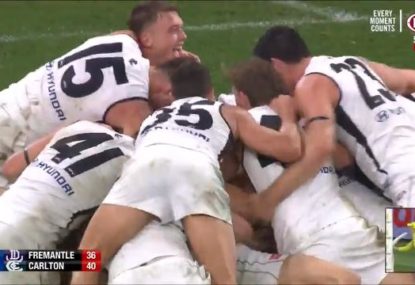 How did his head stay on? 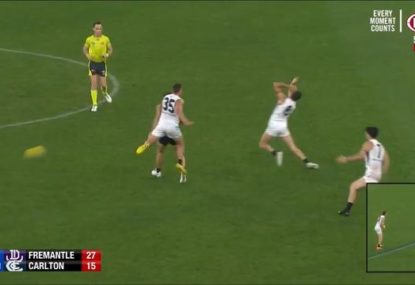