From Swan Lake to the EPL: The making of Graham Potter

Socceroos fans will no doubt be keeping one eye on the results of Brighton and Hove Albion this year, with Aaron Mooy joining goalkeeper Mat Ryan on the English south coast.

Brighton are now managed by Graham Potter, with the 44-year-old taking up his first Premier League managerial position this season.

Potter’s rise to the top has come via spells working in further education and the Swedish fourth division. Not really your traditional path, but one that has still culminated in him reaching the promised land of the Premier League.

Potter’s playing career was unremarkable. A left back, he would probably best fall under the journeyman moniker. Eight appearances in the Premier League for Southampton provided the highlight of a career that took the Birmingham-born defender to spells at West Brom, York City and Macclesfield amongst others.

It was after his playing days came to an end in 2005 that Potter took up the role of football development officer at the University of Hull. A good friend of mine working for a company who hired football pitches actually ended up meeting the man himself. He, like many others it seems, found him to be pleasant, engaging company.

From showing my mate around some astro-turf pitches in West Yorkshire to rubbing shoulders with Pep Guardiola and Jurgen Klopp some 13 years later, it certainly has been quite the ride for this affable Brummie. 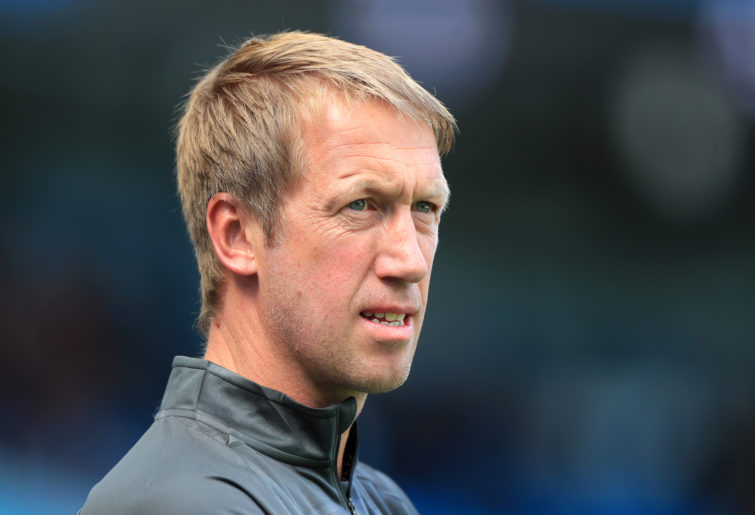 Graham Potter has had an unusual path to his first Premier League managerial post at Brighton. (Photo by Mike Egerton/EMPICS/PA Images via Getty Images)

It was in Sweden and Ostersunds FK that Potter began to cut his managerial teeth. What he achieved there in his time was nothing short of remarkable. Taking over with the club languishing in the fourth tier, Potter oversaw three promotions to lead his side into the Allsvenskan, Sweden’s top flight.

But he wasn’t done there. Ostersunds took out the domestic cup to qualify for the 2017-18 Europa League.

Not simply being happy to be there, Ostersunds defeated Turkish giants Galatasaray to make the group stages, where they then overcame Hertha Berlin amongst others to make the last 32. A dream tie against Arsenal was their reward.

Despite losing the home leg 3-0, Potter’s men had the audacity to beat the Gunners 2-1 on their own turf. Despite bowing out on aggregate, Potter’s stock was now sky high, and his name began to be invariably linked with many vacancies in the UK.

It was Swansea – recently relegated from the Premier League – which gave him his first opportunity in British football at the start of the 2018 season. Here he had to contend with a raft of first team departures and board room uncertainty.

Amongst the chaos off the pitch, on it Potter successfully blooded a number of Swans youngsters. A stand-out was Daniel James, the jet-heeled winger who went on to earn a move to Manchester United, where he has been an early highlight in the Red Devils’ otherwise inauspicious start to this Premier League campaign.

Swansea finished a commendable tenth place in the Championship and also made the quarter-finals of the FA Cup, leading Man City 2-0 at one stage, with their second goal being straight out of the Pep copy book. City fought back that day with three late goals, but Potter was now firmly on the radar of many EPL sides.

It was Brighton where Potter has landed. The early signs have been encouraging. Seagulls fans had become somewhat tired of the pragmatic approach of his predecessor Chris Hughton. Potter has favoured a fluid 3-5-2 formation, with a possession-based philosophy.

A 4-0 defeat at Man City over the weekend may not have been totally unexpected, but Brighton did win some plaudits for their approach to the game. One came from Pep Guardiola himself, who praised their courage.

Brighton fans are rightly bullish about their prospects this season, and I’m backing them to be well clear of the drop zone come the business end of this campaign.

Potter clearly is a man not afraid to take a more unconventional approach to management. At Ostersunds he encouraged his players to engage with the local community, even persuading them to put on a ballet showing of Swan Lake. Whether we are treated to the sight of Lewis Dunk and Glenn Murray pirouetting in tutus remains to be seen, though.

In an era of the celebrity manager, it’s refreshing to see an unassuming quiet achiever take his place at the top table. If Graham Potter is able to continue his upward trajectory, Brighton (and Socceroos) fans will certainly be more than happy.

Weirdest celebration of the season?