Who is the greatest player in the history of the Rugby World Cup?

Don’t answer that question – yet. Because we’re going to tell you.

With ten days left until the ninth edition of the World Cup gets underway in Japan, we’re going to be counting down the 50 greatest players to have graced the tournament over its history.

The process was simple. Nine of The Roar’s best rugby minds – experts Brett McKay, Geoff Parkes, Will Knight, Jack Quigley and Nicholas Bishop, prolific live blogger Olly Matthews and discussion panel regulars Harry Jones, Diggercane and Nobrain – plus yours truly each put together their own list of 50 greatest World Cup players (Nick unfortunately had to pull out of compiling a list, but no matter there!).

We had to consider a player’s individual performances, their success, longevity and overall impact at the tournament – and only took World Cup matches into account.

Points were then awarded to each player based on their position in each list, with 50 points awarded for a first-place finish, 49 for second, 48 for third, all the way down to a single point for 50th.

The points were then tallied up to come up with The Roar’s definitive top 50 Rugby World Cup players.

Over the next nine days, we’ll reveal that group of 50, five players at a time, with each quintet written by a different member of our panel. There will, of course, be no spoilers ahead of time, but it’s more enticing than spoiling to say only a single point separated first and second place.

Got it? Good. Time to begin the countdown, starting with…

Think of Jannie de Beer and there’s only one match which comes to mind: the South Africa versus England 1999 quarter-final. The match itself was no classic, but the Bok 10’s astounding five-drop goal, 34-point haul in the 1999 quarter-final which ended England’s tournament was.

It’s made all the more remarkable when you consider Henry Honiball probably would have played that quarter-final had he been fit. But he didn’t, and de Beer did – and duly made rugby history while he was at it.

Watch those five field goals again, and it hardly seems fair. Four of the five them came from beyond 40 metres, yet only one of them ever really looked like it might possibly miss. The final scoreline of 44-21 belies just how important they were, too.

Heading into the break up by only four, the Springboks lead was cut back to a single point early in the second half, only for the flyhalf’s kicking masterclass to bury England. The first three drop goals – all in a ten-minute period – gave his side some breathing space, while the fourth and world-record fifth put the game to bed.

Fittingly, de Beer capped off the match with a cross-kick and deservedly fortuitous bounce which put Pieter Rossouw away for the sealing try.

It’s a cruel irony that South Africa’s tournament, and de Beer’s only World Cup of his career, was ended the following match by an even more famous drop goal, but that should take nothing away from their flyhalf’s performance.

A fine halfback in his own right, Kirk probably didn’t boast the individual talent of some of the scrumhalves who’ll appear later in this series. But his leadership in guiding the All Blacks to win the 1987 World Cup was crucial.

The team had been divided by the rebel ‘Cavaliers’ tour of South Africa a year before, and Kirk had only been made captain after Andy Dalton was ruled out of the World Cup.

The All Blacks weren’t even particularly well-favoured to win the tournament. In Kirk’s eyes, both the Wallabies and France were ahead of them before it started – not that you’d know it looking back at their results. New Zealand conceded just 52 points over their six games, scoring 298 as they cantered to the title, with the skipper scoring one of the side’s three tries in the final.

Kirk duly retired shortly after lifting the World Cup to take up a Rhodes Scholarship, but his impact on New Zealand rugby during the 1987 tournament should never be understated. He’ll always be the first man to lift the Web Ellis Cup in victory. 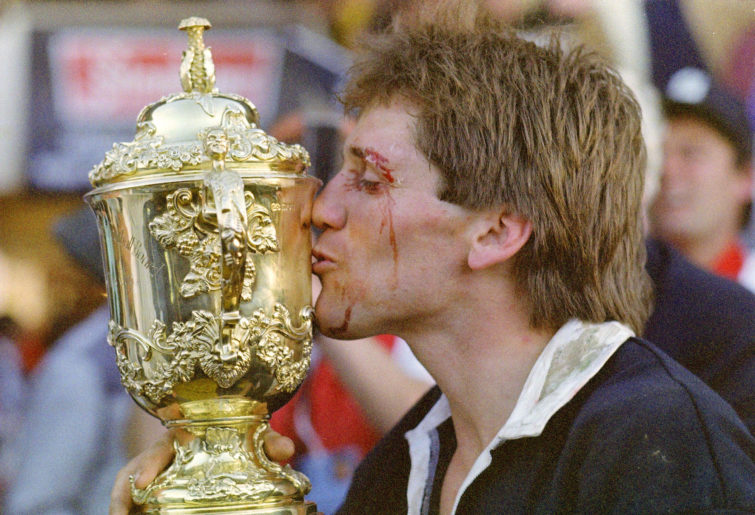 David Kirk became the first man to lift the Web Ellis Cup in victory – and he gave it a quick kiss to celebrate. (Georges Gobet/AFP/Getty Images)

His skipper might have called time on his rugby career after the World Cup, but Zinzan Brooke’s impressive career was only getting started. His contribution in ’87 was limited – behind Wayne Shelford, Brooke only had one run during that tournament, scoring the first of his 17 Test tries during the 31-point demolition of Argentina.

By 1991, he’d become a crucial part of the All Blacks side and was a key member of that and the following World Cup squad, his uncanny mix of skill, strength and mobility establishing him as one of the greatest number eights to have played the game.

Rugby’s textbooks state the backs should be the most skilful players in a XV. No one told Brooke that, and his unique, multi-dimensional approach was best displayed at the 1995 World Cup. Everyone rightly remembers the semi-final between England and New Zealand for Jonah Lomu steamrolling Mike Catt and anyone else wearing a white jersey. It’s maybe the only performance dominant enough to overshadow a back-rower nailing a drop goal from just inside halfway.

There aren’t many better litmus tests of a player’s importance than an injury before a major tournament. Do you risk naming someone who’s in the casualty ward, in effect taking a short-handed squad for the opening stages, knowing they can make an impact at the business end despite a lack of match fitness? Or do you opt to take a fully fit side instead?

When Richard Hill tore his hamstring in the lead-up to the 2003 World Cup, Clive Woodward was faced with that exact dilemma. He decided – rightly, as it turned out – to bring the injured back-rower to Australia. That speaks volumes about just how important the flanker was.

Hill didn’t play in the group stage. When he missed the narrow quarter-final victor over Wales, it looked as if he might not make it back for any of the tournament. Indeed, he described the lead-up to that match as one of the toughest moments in his career.

“That was the hardest time,” Hill told The Guardian in 2004.

“I had a scan that seemed to paint a pretty desperate picture. The injury looked worse than we’d thought. I had a momentary feeling of, ‘Oh no, this fight is over.'”

But against France, there he was in that intimidating back row alongside Lawrence Dallaglio and Neil Back, giving England an edge in the forwards as they won an attritional affair on a horrid Sydney night, then playing a key role in a final I’d rather not write that much more about.

But here comes Jason Robinson, and one cannot talk about the diminutive league convert’s World Cup career without mentioning the 2003 final.

He might have been found out during Australia’s opening try of the match, but through no fault of his own – he’s not to be blamed for the crime of being shorter than Lote Tuqiri. Afterwards, he was a constant danger to the Wallabies that night and produced a classy finish for England’s only try of the decider.

Having retired from international rugby in 2005, that single World Cup in 2003 looked like it’d be the only one of Robinson’s career. But after being lured back by Brian Ashton, he played a key role in getting England into back-to-back finals despite suffering a hamstring injury in their 36-0 group-stage loss to South Africa.

Robinson returned for the side’s gutsy quarter-final win over Australia before playing a starring role from the back against France in the semi, when he was assured under the high ball and kickstarted a period of English go-forward with a trademark dazzling run.

A busted shoulder forcing him from the field in the final defeat to South Africa was a cruel way for Robinson’s Test career to end, and should take nothing away from his stellar performances at the World Cup.