Promotion and relegation is the shake-up the A-League needs

The A-League needs a good kick up the backside to revive interest and get it going again, and a national second division with promotion and relegation might do that.

It’s all well and good to say that the A-League needs to crawl before it can walk but at some point, you have to try. Trundling along with a closed league risks ending up in the A-League gradually fading out and dying from spectator boredom.

What’s needed is promotion and relegation.

Not a managed process or some weird and convoluted conference system like the former NSL, but two conventional leagues of 20 teams in each with a simple three up and three down at the end of each season. The salary cap and salary floor need to be scrapped and transfer fees brought in.

Teams that enter a second division will need to meet basic requirements such as having a certain number of seats as well as broadcasting facilities and so on, but they should also have to meet a required number of foundation members to show they would have enough support to be sustainable.

There should be enough locations to form two national divisions. Firstly, you have regional locations like Canberra, Wollongong, Tasmania, Gold Coast, Sunshine Coast, Townsville, Cairns, Geelong and Darwin who could all support teams. 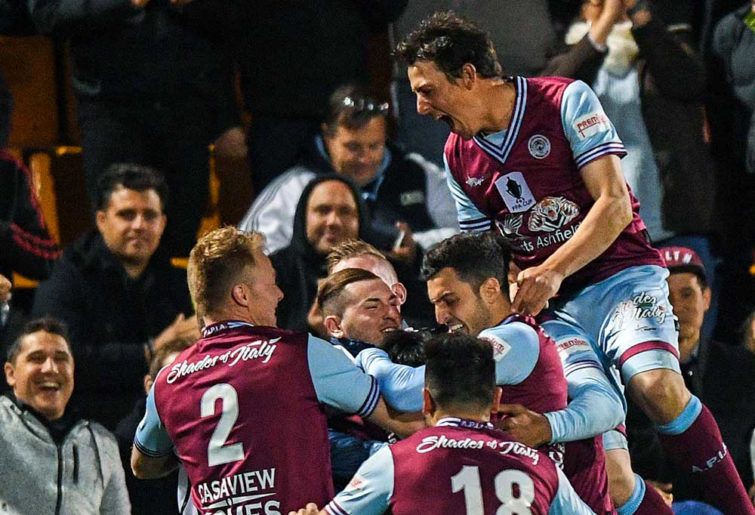 If you have five top-flight teams in Sydney and another five in Melbourne that gives you 20 derbies in each city, for 40 in total. At that point, the continuation of the non-football-style finals would be highly questionable and they can be scrapped.

To start with, the first two seasons could be promotion only with four going up each time to bring the top flight to 20 teams. Then once there are 20 teams in each division, promotion and relegation can begin, which will create huge media interest and excitement among fans.

Once the second division is established there will be a whole new series of narratives that will create interest among fans from across Australia.

The return of the Wollongong Wolves to the national stage will be a great story while Canberra will be eager to begin a new stage in their history under the Canberra United banner.

Tasmania will be a newcomer who have never had the chance to compete on the national stage and will be determined to make an impact.

Gold Coast United could come back from the dead and play at a proposed 10,000-seat boutique stadium while Sunshine Coast will want to have a crack as well. Both teams will also be keen to get stuck into Brisbane Roar as together they represent the three largest cities in Queensland.

Geelong have never taken part in a national league but they would certainly be welcomed by many fans. With Greater Geelong’s population expected to grow to just under 400,000 by 2040 it really should have it’s own team, not one from Melbourne’s western suburbs.

Darwin is the logical choice to represent the Northern Territory.

In Sydney, the Cronulla Sharks could revive their bid for a second team under the same brand as the NRL team as Lyall Gorman was keen on before Southern Expansion came along and ruined it.

Out in the west, the Panthers could start a new team in Penrith as they once did in the NSL era, adding a new rivalry with the Wanderers.

Sydney United 58, Marconi Stallions and Bonnyrigg White Eagles could do a merger and start a new team in Fairfield. The local council are already upgrading Fairfield Showground in preparation for a future team if this happens.

On the Northern Beaches, Manly United have voiced interest in joining a second division and might also help the case for an upgrade of Brookvale Oval.

Down in Melbourne, the main contenders are South Melbourne, who never stop talking about themselves, Melbourne Knights, who were their main rivals, and Dandenong, who have a very solid bid for a new team. Even in a second division, the matches between these sides should draw good crowds and if they get promoted, they’ll attract even more fans.

In Brisbane things get interesting. Brisbane Strikers, Brisbane City and Ipswich all made A-League bids in the last round of expansion while clubs in Redcliffe and Redlands have stated their ambitions to join a second division. A hypothetical bid from South Brisbane might also be forthcoming, possibly linked with a hypothetical NRL bid by the Souths Logan Magpies and could hypothetically be based at a new stadium at Wakerley Park in Runcorn.

That just leaves the western states. Starting in Adelaide, you have Adelaide City and West Adelaide, the latter reportedly backed by a $100 million budget when they bid for an A-League licence in 2018. In Perth you have Fremantle City, who made a high-profile bid with Juventus, and ECU Joondalup, who local council have said they might be willing to build a stadium for in the future.

With 40 teams spread over two divisions and three new ones joining the top flight every season, there would be plenty of new interest in the A-League. As viewers and crowds improve, so will the TV and broadcasting deals, not to mention news coverage.

Promotion and relegation is the shake-up the A-League has to have.