The Sydney Roosters have gone back to back after a highly controversial 14-8 grand final victory over the Canberra Raiders. Let’s take a look at the player ratings for the Roosters.

James Tedesco – 7
The Raiders did a good job on Tedesco for the majority of the night. He was safe at fullback for the first 60 minutes but his class showed in the end with Tedesco crossing for the winning try.

Daniel Tupou – 7
The Roosters back three were massive coming out of their own end and Tupou was no exception, running for 185 metres. He also had a hand in the winning try.

Latrell Mitchell – 6
Mitchell set up the winning try with a great ball to Tupou, but otherwise was quiet in attack. His defence was immense when the game was on the line.

Joseph Manu – 5
In a grinding type of game, Manu had little impact, with only six carries for the game. There were no glaring mistakes, it was just a quiet game for the Roosters centre.

Brett Morris – 8
Brett Morris was one of the best for the Roosters, running 140m in continually getting his team out of their own 20m. He also successfully handled an aerial assault in the second half, with some wonderful takes.

Luke Keary – 7
It was a rocks and diamonds type of night for Keary, but he was involved in the match-winning play. Keary’s kicking game was sound, but a couple of bad misses in defence marks him down.

Cooper Cronk – 7
Spent ten minutes in the bin for the first time in a while. Cronk was solid at halfback organising his team well and kicking nicely when required.

Jared Waerea-Hargreaves – 9
Waerea-Hargreaves was the second-best player on the field for the Sydney Roosters, hitting hard in defence and running 185m in attack. He made a large difference when he came back on towards the end of the game.

Sam Verrills – 7
Verrills played strongly in his 50m stint prior to Jake Friend coming on. He got through a mountain of defence and scored a solo try from dummy half in the sixth minute. 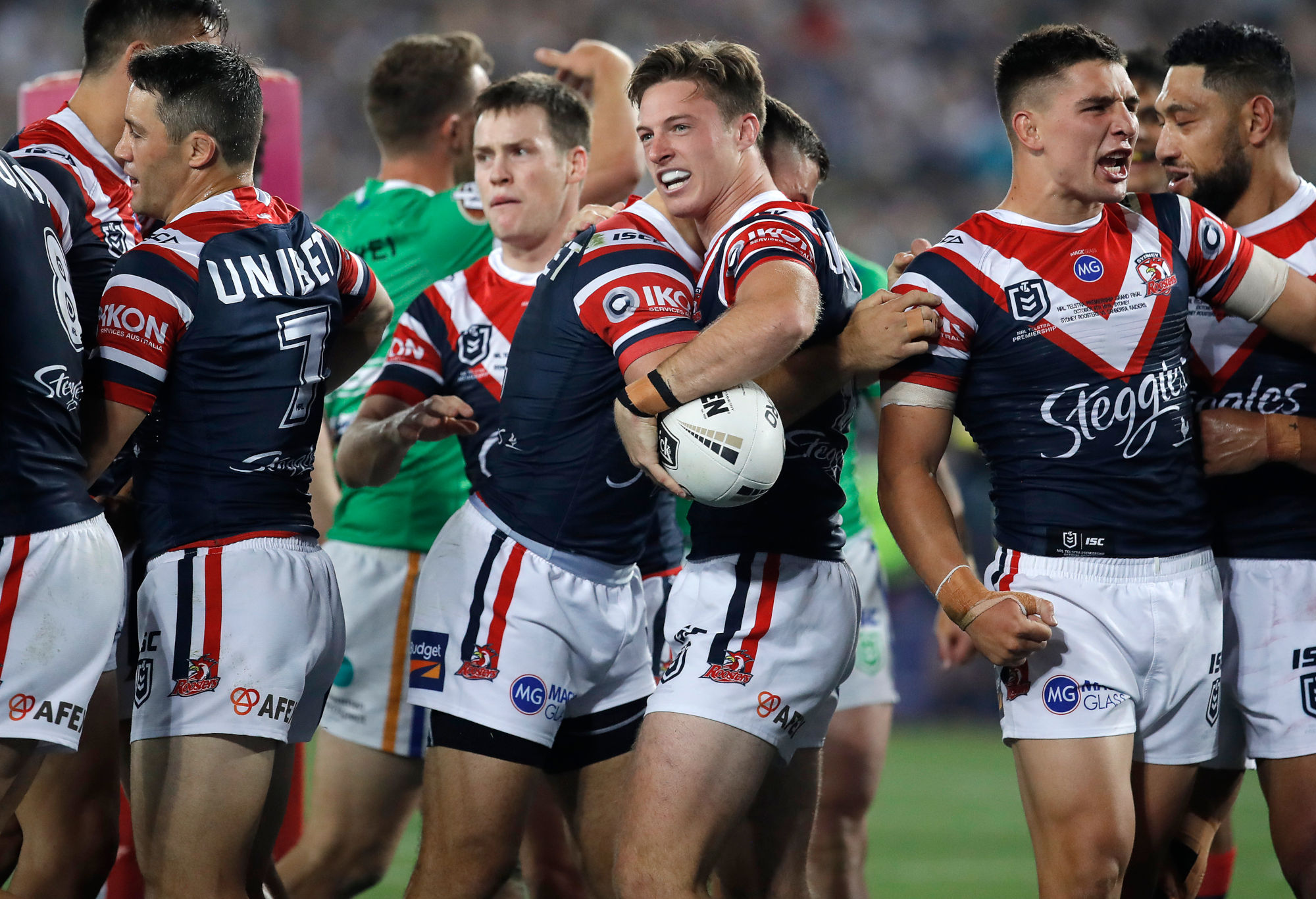 Isaac Liu – 5
Isaac Liu was quiet for the Roosters, running only 76 metres through the middle. A dropped ball, when the game was on the line after an hour, worsened his night.

Boyd Cordner – 7
Despite a poor miss on Jack Wighton which led to the Raiders try, Cordner was strong on his favoured left edge. He was also heavily involved in defence.

Mitchell Aubusson – 3
Aubusson left the field with a serious knee injury in the 13th minute and had little impact due to this.

Victor Radley – 9
Radley was the best Rooster on the field. The Roosters’ fortunes changed when he returned in the second half and his great ball to Taukeiaho swung the momentum late. All this was after he returned from a HIA midway through the first half.

Angus Crichton – 5
Although Crichton worked hard, he was below his best, with a bad miss on Wighton in the first half. He had plenty of carries but they were largely ineffective.

Nat Butcher – 7
Butcher got through a lot of defence and was rock solid through the middle.

Siosiua Taukeiaho – 8
Taukeiaho changed the game with his line break late, but that wasn’t the extent of his contribution. Taukeiaho made 184 metres through the middle of the ruck, in a huge game off the bench.

Jake Friend – 6
It was only a cameo for Friend, on his return from injury, but he had some good moments.

And, finally, a special mention for the Roosters trainer. He gets 8/10 for his falcon!

A shoulder injury to 400-gamer Cameron Smith and a knee injury to star five-eighth Cameron Munster have resulted in some tremendous experience and attacking brilliance that will be lacking against the Sydney Roosters on Thursday.

Sydney Roosters recruit Sonny Bill Williams says he will have to switch from holiday mode to prepare for his NRL comeback.

Bringing Sonny Bill Williams back to the NRL would be an enormous boon at a time when every extra set of eyeballs on games are precious.