By saying nothing, Ricky says everything about the Raiders of 2019

The scene was set. Journalists sat poised with voice recorders in hand, headlines already written with outrage and blow up in block capitals.

Ricky Stuart was about to walk in. His Raiders had just lost a grand final, the match-winning try coming directly off a contentious call.

Jokes were made warning journalists that bullet-proof vests would be needed to shield them from the verbal spray of shots that many expected would be fired.

“Can we just get your thoughts on that?”, the opening question. Taking a breath, Stuart leaned back into his chair as everyone watching at home moved to the edge of theirs.

What came next was not what anyone was expecting. But it was exactly what everyone should have been expecting.

Maybe not of the Ricky of the past. But both he and Raiders of 2019 were of a different breed, one which built their success on hard work and making no excuses.

When the opportunity came for him to latch onto that incorrect call and numb the pain of a heartbreaking defeat, he flatly refused.

Instead, he offered this: “The Roosters achieved something very special tonight in winning two grand finals in a row.”

He then paused and continued, “I don’t want to take the spotlight off that.”

The disappointment on his face was obvious – that he wouldn’t be returning to the nation’s capital with the trophy like he did 25 years earlier.

But the respect he showed for what their opposition had achieved sent a clear message that the disappointment would quickly fade away and that he wouldn’t stop until the spotlight was on them.

When asked if he couldn’t be prouder of the seventeen men in green who took the field on Sunday night, he offered a simple no. 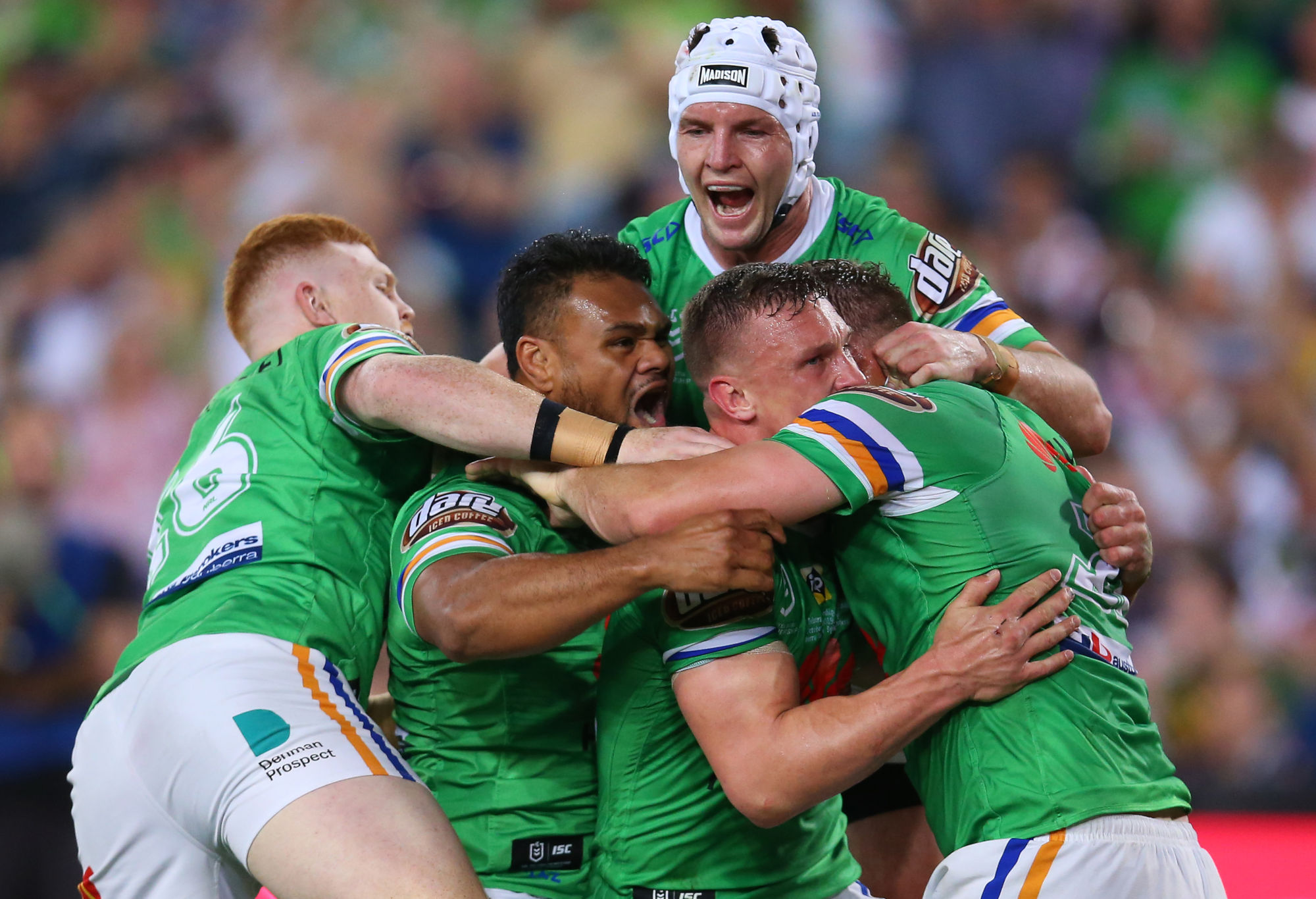 This was a side that only last year let Shaun Johnson slot two-straight field goals in the final two minutes in a game that condemned them to a ‘choker’ tag for the entire 2018 season.

This was a side that conceded 540 points that year because it didn’t matter as long as they scored more than they let in.

The Raiders of 2019, however, weren’t about taking the soft options. They were about holding three teams scoreless for the first time in their history.

They were about overcoming two sin-bins and an 18-0 deficit to shock the Storm in Melbourne.

They were the reflection of a coach who gives them everything, even if it means sitting down on the sideline in freezing Canberra conditions. All just to show them that he believes in them.

And he was right to. He oversaw the transformation of Jack Wighton from inconsistent and ill-disciplined fullback to classy five-eighth and Clive Churchill winner, willing to put his body on the line.

Then there’s Charnze Nicoll-Klokstad, who went from not playing any first-grade games in 2018 to running for 223 metres in the 2019 decider.

Throw in names like Josh Papalii and Aidan Sezer who also played some of the best football in their careers.

All of this can’t be put down to Sticky alone. But his press conference on Sunday night proved that he knows that this team is better than one officiating mistake.

They had conceded just the one try against the team who had scored the most in the competition. That was before the Roosters ran almost the length of the field to break their hearts.

Canberra were a tough bunch to crack in 2019. Whether it was the right call or not, the best teams don’t let incorrect decisions get to their head.

Unfortunately, in that brief moment, the Raiders were guilty of doing just that.

It was cruel. It was unfair. But you don’t win premierships dwelling on what could have been.

Ricky already has one eye on next year.

And as painful as the ending to 2019 may be for Raiders fans, their season and future will not be defined by a six-again call but by how they respond to it.

All they have to do now is follow Ricky’s lead.