So the Roosters went back to back thanks to Trent Robinson, Cooper Cronk, the Coach Whisperer and the best defence we have seen since the tackling show against the Storm two weeks ago.

They won in spite of a sin bin call against Cooper Cronk that was a millisecond late, with the assistance of Ben Cummins’ “six again is really five, sorry!”, Canberra’s weird tactics when the Roosters had 12 men on the field, some spectacular defence and three super tries.

Like all grand finals, this one featured some quirky happenings from outside the football area.

One was smoke. When the headline act One Republic started to play, the smoke from the fireworks was so dense I thought we were having a repeat of a London pea soup fog or a Jack the Ripper movie. But it cleared in time for the fire.

The huge mechanical structure that looked like a Transformers reboot after many spectacular bursts of fireworks suddenly developed a fire in one of the vents. Never fear, Spiderman is here. Three time the first-responder fireman climbed the scaffold by holding a fire extinguisher and extinguished the blaze. After each smothering of fire retardant, the 82,000 crowd roared its delight.

Then the welcome to country did not go quite as planned with the welcomer Ryan James forgetting the words halfway through. Why not give him a flash card just in case?

Then came the worst half-time entertainment ever.

Something about a kick, something about Freddy’s passing competition. All accompanied by a hysterical host who tried but failed to get us excited. Music would be good. God forbid, dancing girls would be better, but not this drivel. And it went on so long. Yawn!

That Daryl Braithwaite and his friend came out to sing horses. Always good fun, but in the middle of the best part, the players doing their best cavalry charge ran back onto the field to spoil the ending.

In the game itself, there were some controversial moments, but the match was all about the Raiders’ inability to breach the Roosters’ defence, especially when they had 13 against 12. They did not seem to appreciate that the best way to stretch an undermanned side is to throw some passes wider where there may be a shortage of defenders.

The other relevant matter is that the Roosters’ back line is deadly once a break is made. 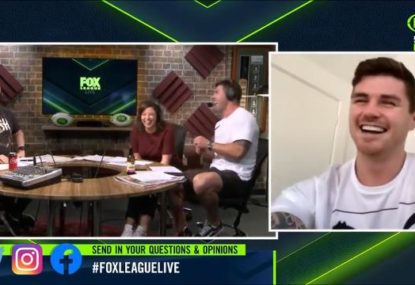 Blair was forced off for a HIA, but did return to play out the game. 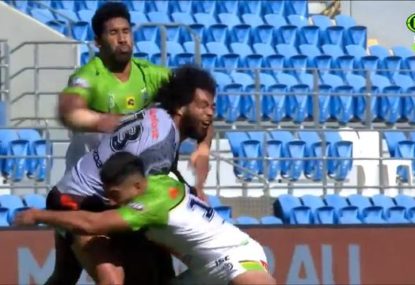 Canberra captain Jarrod Croker has signed a new four-year deal which will keep him at the Raiders until 2024. 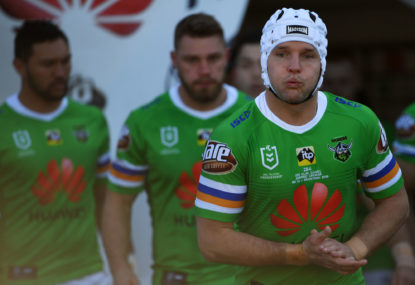