There is some really weird stuff in the NRL rule book

The NRL has had a major rules-based headache since the debacles that unfolded on Sunday, October 6.

The furore over the officiating of the NRL grand final is finally dying down. I’d imagine an audible sigh of relief could have been heard emanating from NRL HQ at Moore Park when the video of Nelson Asofa-Solomona hit social media.

However, the totally avoidable disgrace on the part of the NRL’s operations department in letting trainers operate in direct contravention of the guidelines, along with Ben Cummins reversing a clearly made decision, have made some fans actually read and examine the rules of our great game.

In doing so, I’ve discovered a few unused rules, as well as a few bizarre ones that I did not know existed.

On grand final day there is no doubt that Ben Cummins made a rookie blunder when he reversed his clear six again signal and call.

In section 16 of the rule book, the duties of the referees and touch judges are made clear.

“Changing decision. The Referee judges on matters of fact and shall not subsequently alter those judgments. He may cancel any decision made if prior foul play of which he had no knowledge is reported to him by a Touch Judge.”

In the case of the ruling in regard to the ball hitting the Roosters trainer – who was allowed by NRL operations to be on the field just two minutes into the game, with no injured players to tend to – the referees’ subsequent decision, while unjust, was absolutely spot on and in line with section 16.

“Mutual Infringement. Where play is irregularly affected in the field of play, the Referee shall re-start play with a scrum with the attacking team (i.e. with territorial advantage) to receive the loose head and feed.”

A lot of people have called the mutual infringement rule outdated and in need of change. I know we Raiders fans sure have. But that is the rule as it stands.

So what other rules are there that are outdated, unenforced, ambiguous or unknown? 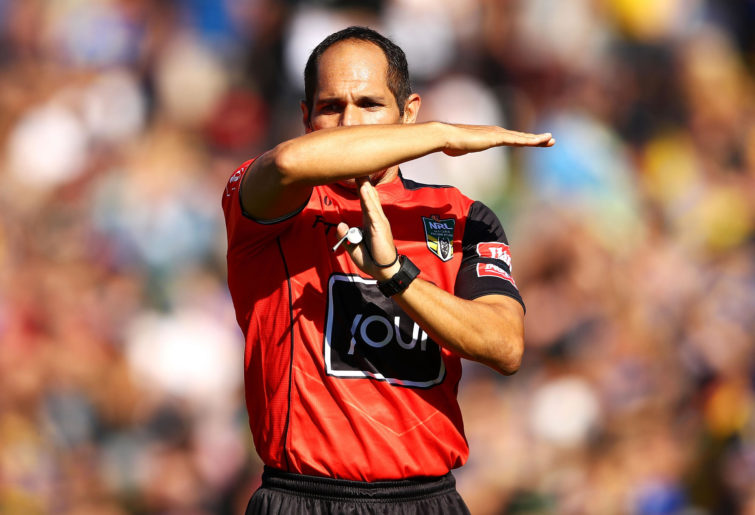 Let’s first look at the outdated.

There is no part of the rules that is more outdated than the laws to do with the scrum. I only vaguely remember contested scrums in rugby league. Yet there are still lots of rules in the book that act as if they still happen.

“Both prop forwards, on the side where the ball is put into the scrum, MUST have their outside feet forward and the halfback must feed the ball into the scrum using the space between their feet.”

I don’t think I’ve seen the ball fed into the tunnel for 40 years. Then there is this about the role of hookers.

“Hookers striking prematurely is one of the more common scrum offences.”

I don’t think a hooker striking prematurely has been a common offence since the 1960s. However, the rules state otherwise. It’s probably time that the scrum in rugby league being little more than lip service to the original concept is reflected in the rule book.

So what about the unenforced rules?

How about this one.

“Obstruction. A player who is not holding the ball shall not be tackled or obstructed.”

The routine and obvious blocking of those chasing kicks is very rarely penalised. For years now the defending side effectively assembles a wall of defenders that block the runs of the attackers who are not in possession, yet only the most blatant ones get called out.

Then there is the deliberate forward pass.

“A player shall be penalised if he deliberately knocks on or passes forward.”

I guess this is unenforced because how can you be certain that it was deliberate?

When it comes to the tackle, there are a few rules that go by the wayside.

“Speed essential. The play-the-ball must be performed as quickly as possible. Any player who intentionally delays the bringing of the ball into play shall be penalised.”

At the end of every game, or when kick returners are waiting for a dummy half to arrive, we see the play the ball routinely slowed deliberately and I have never seen a penalty blown for the crime.

However, the one that is a far worse offence and happens all the time, is the voluntary tackle.

“A player in possession shall not deliberately and unnecessarily allow himself to be tackled by voluntarily falling to the ground when not held by an opponent.”

I may have once seen that enforced way back in the early ’80s, but never since.

How about the old differential penalty? While they have barely been sighted since the 1980s, the rule is still there in black and white.

“In respect of misconduct at the scrum other than foul play or the use of offensive or obscene language a Referee shall award a differential penalty which differs only from a penalty kick in that a goal cannot be scored from it.”

I particularly love the reference to offensive or obscene language. It comes up again – along with a few other pearlers – under the misconduct section.

“A player is guilty of misconduct if he:
(e) deliberately and continuously breaks the Laws of the Game.
(f) uses offensive or obscene language.
(i) behaves in any way contrary to the true spirit of the game.”

It is debatable if any of these are used. I’m extremely curious to see the NRL’s official definition of “The true spirit of the game”. Does that actually exist, or is it just an elusive concept that only the likes of Dane Eldridge can hope to properly articulate?

When it comes to fouling a player who is going for a field goal, there is actually a pretty harsh penalty – albeit one I’ve never seen enforced – even on Good Friday 2015.

“If a player fouls an opponent who is attempting a drop goal, a penalty kick shall be awarded in front of the goal posts.”

The penalty kick applies if the field goal misses or is successful. Technically, I’ve never seen it happen. 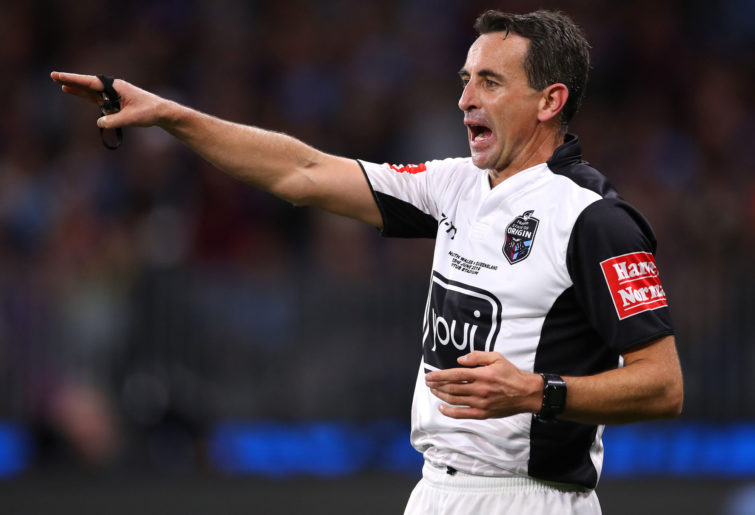 When it comes to ambiguous rules, there is a bit of room for interpretation in the rule about the second movement after the tackle (double movement).

“When an attacking player is tackled within easy reach of the goal line he should be penalised if he makes a second movement to place the ball over, or on, the line for a try.”

So if the attacking player is not within easy reach, it’s OK to have a go? And who judges the difficulty of the effort? Is that something that should be left to the Bunker?

The restart following a successful 40/20 kick has some latitude too.

“The tap kick may only be taken when the Referee blows his whistle to restart play. Prior to blowing the whistle the Referees will give the defending team a ‘reasonable time’ to get into position. This will only occur when all match officials are in position and ready to officiate.”

When reading through the rules, I ran into a few that I had no idea about at all, or didn’t realise.

For example, I thought a tap at a restart had to be just that: tapping the ball with your foot. Turns out that is just the way play has evolved.

“The ball may be kicked in any manner and in any direction and is immediately in play.”

Well go figure. So a player can boot the ball in any direction, as far as they wish, with a punt or a drop kick. The only thing required is that the ball hits the foot.

In the unlikely event that a player kicking for touch after a penalty is awarded has a shocker and kicks the ball out dead in goal, all is not lost.

“Play is re-started with a 20m drop-out if the ball is kicked dead in the opponents’ in-goal from a penalty kick.”

Although the scrum as it is performed in rugby league is regarded with the utmost derision by the union boys, I was surprised to see that you can’t do a push-over try in league.

“A try cannot be scored by grounding the ball when it is in the scrum.

However, I was far more surprised by this rule.

“A player may pick up the ball at the base of the scrum and bore through his own forwards to ground the ball for a try once the ball has emerged from the scrum.”

That’s right, once the ball has come out of the scrum, any player can pick it up and go through his own pack to score a try. Note that there is no mention of the scrum still needing to be properly formed. In scoring, they won’t be seen to be using a shepherd.

It’d be bizarre to see it happen. I wonder if the referees would rule on it correctly if it did.

One thing is for sure though: Gus Gould would blow up deluxe.