Trade period
Let’s face it: Melbourne’s 2019 was abysmal, particularly after the promise of 2018. The club knew it needed to address some of its weaknesses in the off-season, bringing in wingmen Ed Langdon and Adam Tomlinson.

Langdon and Tomlinson are both good players and should improve Melbourne’s midfield mix next year, including freeing up Angus Brayshaw to return to his favoured inside-mid position, rather than having to play on a wing.

The most interesting part of Melbourne’s trade period was its pick swap with North Melbourne. It traded picks 26 and 50 this year and its 2020 first-round pick for pick 8 this year.

Assessing whether it was a worthwhile decision or not will obviously depend a lot on ladder positions next year, but on face value it looks like a great deal for North.

Melbourne probably assessed that a) next year’s draft is a bit compromised (an unusually high number of players are tied to clubs as father/son or academy prospects) and they’d prefer to get two picks in this year, and b) they rate a top ten player highly this year.

They’re clearly backing themselves in to rise up the ladder next year, assisted by Langdon and Tomlinson, and are hoping for two draftees who can come in and make an impact.

Draft
So, armed with two top ten picks, who might the Demons look at? Their past form makes them a hard club to get a read on – they sometimes take best available, but sometimes also seem to look to fill needs.

Over the last few years they haven’t had particularly high draft picks, which is probably why they were keen to get an extra pick in this year, and why a specific draft strategy is hard to discern.

Many club recruiters feel that top 10 picks are so valuable, you take the best available player and move on. But that generally applies to midfielders more than taller prospects, as we saw last year when St Kilda and Gold Coast took the King twins at picks 4 and 6 respectively.

Having two top ten picks probably means the Dees can balance taking one player on needs and another on talent, if they so desire.

There’s been growing speculation this year that Melbourne might plump for Western Australia’s star ruckman, Luke Jackson, at pick 3.

On form alone, it wouldn’t surprise if Jackson was taken there – he’s an elite talent, and even played in the midfield for stints this year.

But some clubs would think that pick 3 is too early to take a ruckman, and that it doesn’t fit a need, given Melbourne already have Max Gawn and Braydon Preuss on its list.

I guess your view on that depends how you rate ruckmen, but looking at it objectively, Jackson has star potential, and players like him don’t come around too often.

If Melbourne don’t take him, he won’t remain on the board much longer. 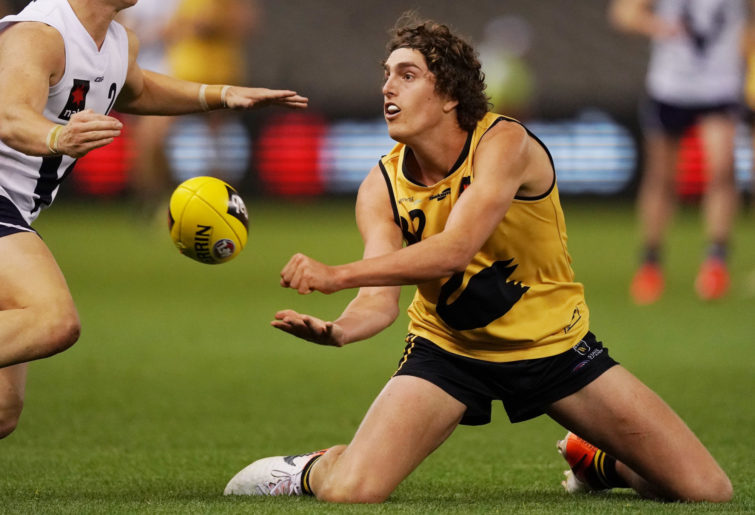 The other stand out option at pick 3 is Hayden Young, a half-back with an elite kick who all 18 clubs would love to have on their list. He’s a 200+ game prospect and would be a perfect fit for the Dees.

One other player they might consider here is midfielder/forward Sam Flanders, who’d add something different to their list.

At pick 8, they’ll have to wait and see who’s left. They’ve been linked to inside midfielder Dev Robertson, who brings leadership qualities but probably isn’t the type of player they need, given their plethora of young inside midfielders.

Cody Weightman is one they’ve been linked to as they search for a small forward, while Caleb Serong or a bid on Fremantle NGA prospect Liam Henry could appeal for similar reasons. Classy wingman Dylan Stephens would add to their depth of outside midfielders.

But the other consideration here is the possibility of a downgrade pick swap. It’s known that every clubs holding multiple later picks, such as Port Adelaide (12, 16, 18), Gold Coast (15, 20), and Geelong (14, 17, 24) are clamouring for a chance to move into the top ten.

The Dees have been touted as a club that might consider this, and in particular linked to a deal with Geelong. It will come down to who is left on the board at 8, and whether Melbourne feel like their player of choice might slide a little later.

Personally, given this draft really evens out after about the top 15, I would be hesitant to downgrade any top 10 picks, particularly given Melbourne won’t have a first-rounder next year. But, they may feel that three picks in the top 20 is better than two in the top ten.

If they do downgrade then a player like Weightman could again be in the mix here, or another small forward in Kysaiah Pickett, who has been invited to the draft. Miles Bergman, Will Day, Trent Bianco and Brodie Kemp will be other names to consider.