Celtic bodies whir around on defence, arms make angles disappear, and everyone is where they’re supposed to be.

Kyrie Irving is gone, but energy is back. Boston lost a basketball ninja – a magical, impossible scorer who often feels bigger than the game.

He is a genius, a ridiculous master of angles and touch, on the shortest shortlist of NBA players singularly worth the price of admission.

But he is complicated, and regularly plays as though he exists adjacent to the team. The court is Kyrie’s Stage, and the Boston Celtics waited their turn. 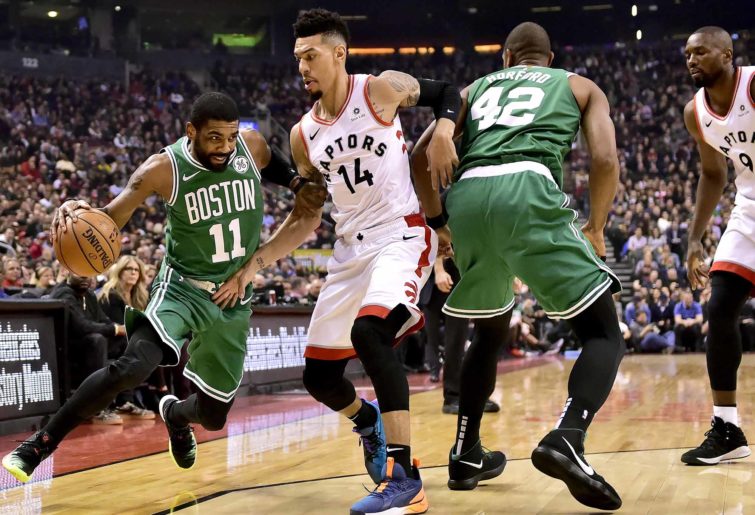 Kemba Walker is the best symbol. You don’t have to squint too hard to see elements of Irving in his game – the shifty changes of pace and off-balance finishes off glass.

The difference is that Kyrie looks effortless – and always balanced even when he’s not. It’s all a little bit harder for Walker, much more of a battle, which makes him less extraterrestrial but a lot more human – and that might have been exactly what this Celtics team needed.

They went from being a vaunted contender led by a recluse to a written off underdog led by a leader who plays with joy.

The ripple effects are self-evident. Jayson Tatum and Jaylen Brown were marginalised last year – stuck in this odd, uncomfortable place between dealing with rising expectations and reduced roles.

With the ball so often in the hands of Irving, Al Horford and a struggling Gordon Hayward, Tatum and Brown were three-and-D players forced to repress designs on being the next Paul George.

Now they can breathe again. They have more possessions, and more space to succeed. Both are rangy on defence and powerful in transition and cutting to the rim. Tatum is beginning to show some advanced playmaking skills, making subtle reads and feeling plays unfold.

Hayward – sidelined for now – looks his Utah self again, an always in control wing force who can handle, pass, score and defend.

Marcus Smart is a genius – the best perimeter defender in the league and suddenly a meaningful offensive player, now with variation and confidence to his jumper.

Things can often work better when you have a smaller group working to their capacity instead of a larger group forced to sacrifice. The Celtics are thriving in this new life.

The team doesn’t make perfect sense. Their five best players all live on the perimeter and none can protect the rim. Daniel Theis has been better than expected but is not the answer. The bench is suspect.

There’s also, at times, still the same lack of force that plagued the team last year. They don’t play downhill or devour the paint.

There’s a lot of Walker, Tatum and Brown slithering towards the paint, crossing over in the mid-range, and fading away for jumpers. Against the athletic power of Giannis and Philadelphia, what they have might not be enough.

But their connectivity, smarts and undeniable talent will give them a chance – more of a chance than you would have figured when they lost a superstar and replaced him with a star.