For the first time in the history of Formula One, the Scuderia did not win a single championship all decade.

Ouch. It still hurts to say that.

The decade itself was bookended by two of the best drivers of the era attempting to bring championship glory to the team and create their own legacy in the same way that Juan Fangio, Niki Lauda and Michael Schumacher did before them.

Both Fernando Alonso and Sebastian Vettel brought their strengths and weaknesses to the team, and ultimately both were unable to end the year as world champion in red.

But who had the better time of it and which driver ends the decade as the better Ferrari driver? Let’s take a look and see if we can come up with an answer.

Races: Vettel 102, Alonso 96
Tricky one here to really analyse. Both had five seasons with Ferrari in the 2010s but Vettel ends up with six more races than Alonso did for the team. This can really be put down however to the extended calendar at the end of the decade, which is something that you can’t really judge either driver on.

If you factor out the final six races of 2019 and look at the stats after each of them had 96 races, Vettel still comes out on top in most categories, so nothing really changes too much in that aspect.

Wins: Vettel 14, Alonso 11
Alonso’s time at Ferrari came when the team had more struggles, making most of his wins more impressive. Taking 2010 out of the equation, the team was never really in true contention for victories in his remaining seasons, especially when it came to 2012.

Vettel, on the other hand, has had better care for the most part in his time at Ferrari, with each car from 2017 onwards a contender for large portions of each season. Vettel was impressive in 2015 by scoring three wins against the extremely dominant Mercedes, but Alonso may just take the cake when it comes to this category given his wins came in a less competitive car.

Podiums: Vettel 54, Alonso 44
Similar to the win category, Alonso achieved most of his podiums in a fairly uncompetitive car for the most part. He also was able to achieve the bulk of all podiums from Ferrari in his period at the team, with Felipe Massa and Kimi Raikkonen only scoring eight podiums compared to Alonso in that period (all from Massa), while Raikkonen and Charles Leclerc scored 36 between them (26 for Raikkonen, 10 for Leclerc) compared to Vettel.

Poles: Vettel 12, Alonso 4
Vettel takes the win in this category for his ability to pull something out for Ferrari in a car that really was not a match to the far dominant Mercedes in the latter part of the 2010s. Qualifying was much more even in the early part of the decade, despite Red Bull dominating most of that period, while Mercedes became virtually untouchable during their dominant era in qualifying.

Fastest laps: Vettel 14, Alonso 8
A very close one here and one that perhaps can tie into the previous entries over wins and podiums, which would give Alonso the edge. However, Vettel has a knack for liking records and pursuing random things like the fastest lap of the race, while Alonso doesn’t seemingly care for these.

Given that the fastest lap is perhaps the least important factor of all these categories, Vettel will edge out based on him actually caring to take notice of this statistic.

Retirements: Vettel 11, Alonso 8
An interesting category here as the lower number should be the one to take the category. The easiest way to differentiate between the two comes down to technical retirements compared to accidental retirements.

Points: Vettel 1367, Alonso 1190
Another tricky one that could also come down to Alonso scoring more points in bad car compared to Vettel who had a better car to score points. An easy argument to make.

However points also come down to consistency, with even a bad car capable of scoring solid points and making the most of other misfortunes around them. For this let’s look at which driver had the better percentage when it came to finishing in the points during their time at Ferrari.

Final score: Alonso 4, Vettel 2
In conclusion, it appears as though Fernando Alonso ends the decade as the best Ferrari driver between the pair. Few would argue with this, as to many Alonso probably deserved to come out of his time at Ferrari with an extra world championship, if not two.

This is highlighted by the fact that Alonso had two title-deciding races in both 2010 and 2012, compared to Vettel who hasn’t quite taken the championship hunt to the final round, despite being in prime positions to do so in 2017 and 2018.

So while neither driver reached the holy grail for the most famous team in F1, Fernando Alonso can at least hold his head slightly higher with the knowledge that he was the best Ferrari driver of the 2010s.

There was no love lost between George Russell and Valtteri Bottas after their crash at the Emilia Romagna Grand Prix in Italy. 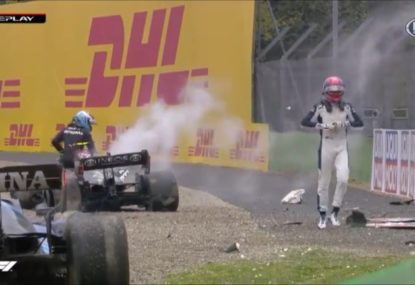